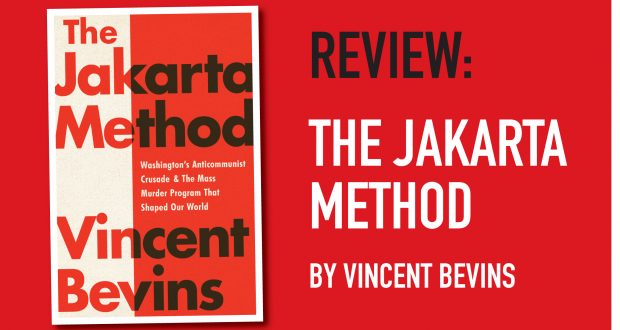 The beautiful Indonesian island of Bali attracts visitors from all over the world. But most holidaymakers have no idea that just over fifty years ago the Indonesian military and police killed 80,000 unarmed civilians on that island. The beaches of Seminyak boast gourmet restaurants, five-star hotels and cocktail bars; in 1965-66, the same beaches were the site of mass executions. It’s understandable that tourists don’t know about these events; they have been erased. One Bali guidebook, in its potted history, has a terse entry for 1966: ‘Suharto replaces Sukarno as president of Indonesia.’[1] No mention that this ‘replacement’ involved the killing of one million left-wing Indonesians.

The Jakarta Method by Vincent Bevins deals with this massacre and traces how its ‘method’ was very consciously exported to country after country, under the guidance of the United States government. The book is global in scope and the author acknowledges the debt he owes to scholars and survivors of state terror in a range of countries. The Jarkarta Method presents a bold counter-history of the Cold War, showing how this colossal violence played an essential role in shaping the world we live in today.

These crimes were rooted in a rabid anti-communist ideology, which saw every challenge to the powerful and wealthy as part of a ‘global communist conspiracy.’ The hypocrisy and projection were off the charts. The anti-communists themselves plotted in the shadows, with foreign intelligence agencies pulling their strings. This is just one example of how they themselves proved to be guilty of every kind of depravity they falsely attributed to communists, socialists and trade unionists.

As Bevins argues, the revolutionary movements in every corner of the world in the 1960s and 70s were rooted not in conspiracies, but in the miserable and unbearable conditions created by capitalism. In addition, the ruling bureaucratic elite in Moscow were cautious and grudging when it came to these movements, and the ‘Communist’ parties allied to it were generally moderate reformers. The anti-communists proved that they were in no sense motivated by fear of the very real crimes of Stalinism when they employed the very same methods themselves as soon as they could.

Indonesia had thrown out Dutch imperialism after a revolutionary war (another episode that is skimmed over in the guidebooks!). After the Second World War, the phrase ‘Third World’ was spoken with pride, expressing a hope that oppressed countries could secure a position of dignity and prosperity. Indonesia was seen as a key leader of the ‘Third World.’ So before 1965-66, the word ‘Jakarta,’ the Indonesian capital, signified something bold and optimistic.

The Parti Kommunist Indonesia (PKI), far from being a shadowy cabal, it was a mass workers’ party with 3 million members. 20 million Indonesians – one-fifth of the population! – were members of broader groups openly affiliated to the PKI – trade unions, farmers’ organisations, a cultural and entertainment apparatus and the women’s organisation Gerwani.

The PKI leadership was wedded to the Stalinist stages theory, which held that socialism was not possible in under-developed countries. They believed that socialists should play second fiddle to the ‘progressive bourgeoisie’ until such time as a ‘period of capitalist development’ had taken place. In the PKI leadership’s perspective, the struggle for socialism could wait until sometime around the end of the 20th century. The party was unarmed and gaining in elections; it had neither means nor incentive to commit the bloody acts that it was later accused of.

The supposed representative of the ‘progressive bourgeoisie’ in 1960s Indonesia was President Sukarno, a charismatic leader who carried off a delicate balancing act between Islam, the military, various shades of nationalism and the PKI. In turn, the PKI gave critical support to Sukarno. He was not a socialist and was very conscientiously neutral between the US and the Soviet Union. But in Washington DC, ‘neutrality’ was not tolerated, only subservience.

On the night of September 30th 1965, Indonesia was gripped by rumours of an impending military coup. A group of pro-Sukarno army officers abducted six of Indonesia’s top generals and later, for unknown reasons, shot them all dead. This incident, shrouded in mystery and speculation to this day, was seized upon by the right wing. A bloody and bizarre version of events was broadcast around the world: it was claimed that members of the PKI women’s movement, Gerwani, had tortured and castrated the generals in a demonic ritual, mutilating them and stabbing them to death.

Gerwani were not even involved in the affair. PKI leaders had only the most tenuous connection. But to this day, contrary to all forensic and historical evidence, the Indonesian ruling class insists that this pathological, misogynistic nightmare is the real version of events.

Down to the Roots

This legend was used to trigger violence on a staggering and chilling scale. Military, police and paramilitaries destroyed the PKI in six months. Bodies clogged the rivers. The smell of death hung over parts of the countryside. The aim was to ‘terminate breathing’ of ‘witches’ (ie, Gerwani) and to exterminate the PKI ‘down to the roots.’

The author weaves the stories of individuals into his general account. In 1965, 17-year-old Magdalena moved from a rural area to Jakarta, found work in a T-shirt factory and joined the trade union. She barely noticed the events of September 30th, but next time she travelled home to her family she was arrested. Magdalena endured terrible suffering in custody, but she survived. She is still alive, shunned and despised by ‘respectable’ society in Indonesia. At least a million others were not lucky enough to survive.

President Sukarno was disturbed by the slaughter, but after September 30th he was sidelined by the military and a few months later he was overthrown without struggle or ceremony. The ‘progressive bourgeoisie’, in the form of Sukarno, was revealed not to have had great social weight or power after all. Class struggle had reasserted itself. But only one side in the struggle was armed. Workers and poor people, represented by the PKI, suffered a crushing, historic defeat at the hands of the ruling class and its military. Forces in the middle, such as Sukarno, were swept aside.

Role of US capitalism

The fingerprints of the US government were all over events. They supplied lists of alleged communists for the Indonesian authorities to torture and kill (they had done the same thing in Guatemala and in Iraq). They spread the most grotesque regime propaganda. Only one US politician condemned the massacre. The military officers were all trained in the US and the new dictator, the dour, corrupt General Suharto, had been a friend of US interests for years.

There followed a carve-up of the country between US business interests and a corrupt Indonesian ruling class. So great was the chauvinism of this new regime that the Chinese alphabet itself was banned – this in a country with a large Chinese community. Ten years after the massacre, hundreds of thousands of survivors were still imprisoned in a vast network of concentration camps. From 1975-79, the Indonesian ruling class again employed anti-communism to justify their genocide in East Timor.

Indonesia was once again quietly in the fold of imperialism, and the word ‘Jakarta,’ which had once carried optimistic overtones, became a sinister threat. In Chile, right-wing activists wrote ‘Jakarta is coming’ on walls before the 1973 coup. And Jakarta came: after the coup the left suffered mass imprisonment, torture, exile, murder.

Bevins traces how, in 11 different countries, repressive operations named ‘Jakarta’ were put into effect. The list of countries where the method was applied, as opposed to just the name, is much longer. It’s important to bear in mind that we are not talking about fatalities of war or even civilian ‘collateral damage.’ We are talking about the cold-blooded murder of unarmed civilians.

This is a dark subject and some will even find it morbid. A whole generation of socialists was exterminated without mercy. But the dictators, torturers and secret agents have not gotten away with it, because they left behind searing lessons that must be heeded by generations moving into struggle in the 21st century.

There is a strand of socialism called reformism, which is based on trusting in the neutrality and impartiality of the army top brass, the police, the courts, the senior civil servants, etc. This illusion was brutally shattered again and again down through the 20thcentury. If socialists win or seem likely to win an election, the rules of the game suddenly change; methods are employed varying from financial blackmail to military dictatorship and fascism. In country after country, ‘But that can’t happen here,’ have proved to be famous last words. Nobody who reads The Jakarta Method should come away with illusions in reformism.

Millions of people in the 1960s, who had just courageously broken free of imperial domination, hoped for a brighter future and believed that former colonial countries could develop on the basis of independence and capitalism. But, as Bevins points out, every single one of the former colonial countries is still in the very same subservient economic relationship with the old empires (with the anomalous exceptions of Taiwan and South Korea). It was the General Suhartos of this world, and not the President Sukarnos, who turned out to be the true face of capitalism in the 20th century. This demonstrates that the chains of the former imperial countries can only be broken by socialist methods: by taking the resources and industries into public ownership and democratic control, using them for the good of all.

Bevins shows how the massacre in Indonesia caused many on the left to turn away from peaceful, constitutional action and toward violent, authoritarian or guerrilla methods. But we should avoid such a rigid distinction. In the 1917 Russian Revolution, the Bolsheviks did not seize power until they had won a decisive majority in the elected Soviets, or workers’ councils. This was democratic in every real sense; they never promoted supposedly ‘progressive’ sections of the ruling class, but based themselves on the enthusiastic support of the majority, particularly workers in the cities. On the other hand, their actions were not ‘constitutional’ at all. They pursued a peaceful course for as long as possible, but they had no illusions that mere scraps of paper would be enough to protect them from a well-armed, well-financed counter-revolution; they dissolved the old state, army and police and built their own from the ground up.

It is hard to avoid the conclusion that the ‘Jakarta Method’ was essential to the victory of capitalism in the Cold War – although Bevins backs away from this conclusion himself, emphasizing that the Soviet Union fell as a result of its own internal contradictions. But a wave of successful revolutions would have changed the course of world history, including within the Soviet Union itself. In any case, the author shows beyond dispute that US imperialism, far from being a champion of democracy in the Cold War, was aggressive and merciless. He points out that since the end of the Cold War, after a brief decline in US military spending in the 1990s, the tempo of imperial violence has risen to new heights.