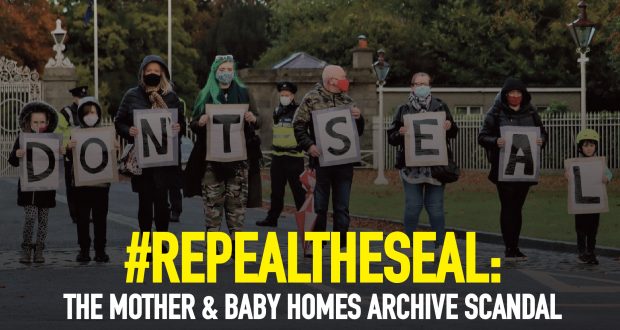 The government decision to seal the Mother and Baby Homes archives for 30 years has been met with huge backlash from working-class communities. The move to seal the documents for three decades, despite survivors concerns, can be regarded as another form of abuse on working-class women – with survivors noting that for those impacted “consent was taken from them when they were in institutions, and was being taken away again”.

As it stands, 170,000 people have signed a petition, created by Aitheantas – adoptee identity rights, they demand that the archives not be sealed and that survivors have access to their personal and relevant information. This number, if anything, displays huge levels of support for survivors but also the anger and dismay felt by many.

As the government continues to hide from the dark past of Church and State collusion, survivors, campaigners and the public are outraged at another attempts to cover up the abuse and trauma experienced by working-class individuals and families all over the country. The anger has evolved into action with local and socially distanced demonstrations being organised by survivors and activists. In Dublin, Socialist Party member Ruth Coppinger played an important role with survivors in her constituency by assisting in organising a local demonstration and a protest outside Áras an Uachtaráin that put the voices of survivors at the fore.

The Green Party’s decision to vote alongside Fianna Fáil and Fine Gael has been widely seen as a betrayal. For some its members this was the final straw in their craven capitulation to its coalition partners, resulting in the resignation of the heads of the Young Greens and Queer Greens, and it’s Cork councillor and 2020 election candidate, Lorna Bogue.

In this year’s election, the Green Party benefitted hugely from a youth vote – the radicalisation of the youth in Ireland has been an unwinding process from marriage equality to repeal the 8th, two campaigns that championed the slogan “separate Church and State”. The Greens inability to understand the magnitude of their position highlights their separation from working-class communities and their failure to recognise generational wounds that are still felt today.

The Commission of Investigation into Mother and Baby Homes undertook a five-year state investigation, and it is due to publish its findings on 30 October 2020.  The Commission was set up after the discovery of 796 children’s bodies that were dumped in a septic tank by the Sisters of Bon Secours in Tuam. The abuse, policing and indoctrination displayed by the church is evident when you look at the experience of women in Ireland.

For several generations poor and working-class women had their babies snatched from their arms and told their babies were better off without them. While up until two years ago, women were forced to carry unwanted pregnancies because of Ireland’s abortion ban. This was the result of the domination of the Catholic Church in our society and their aims to control women’s bodies.

The Commission investigation includes personal testimonies of survivors, information on their emergence and departure from the home, and information on their children among other findings. The government have responded to this by ignoring the demands and voices of survivors by voting 78-67 to seal the archive for 30 years. However, the information from 11 of the Mother and Baby Homes will be transferred to Tusla – the child family agency. This is concerning to survivors as the Mother and Baby Homes forum already raised its fears around the agency, where they stated Tusla has “a practice of withholding identity and personal information from applicants detained as children…” and it is known that they have provided survivors with almost entirely redacted copies of their information.

Of course, it is necessary to approach this issue with sensitivity and caution, ensuring that the findings around personal information is dealt with consensually and confidentially. With this is mind, carefully and critically thought out amendments were put forward in the Dáil – influenced by the demands of survivors and campaigners. However, the government rushed through the Bill and finished the discussion with a ‘guillotine motion’ – this highlights the undemocratic nature of the Dáil as a guillotine motion is used to quickly end a debate, meaning all amendments put forward by the opposition fall, while the government amendment’s pass. The refusal to give a substantial amount of time to such a serious debate reinstates the point that real gains for working-class people can only be achieved through organised grassroots movements.

The government attempted to cynically justify their position by stating it is for the purposes of preservation, as the archive will be destroyed when the Commission ends this month. Another dubious argument pushed was that the Commission was required to seal the archive when it was received by Minister Roderic O’Gorman. Nevertheless, it appears the government are prepared to avoid tackling the issues arising from the findings of the Commission. Dr Maeve O’Rourke, who has worked tirelessly with survivors, said that under section 12 of the 2004 Act, the Commission is required to provide participants with information it gathers that is relevant to them.

Despite the government’s stance, the Commission of Investigation Act 2004 no longer requires them to seal the archive. This was amended in 2018 with the introduction of GDPR – section 198 of the Data Protection Act amended section 39 of the 2004 Act. To add to this, article 23 of GDPR does not allow for blanket restriction on personal data. The government’s clear avoidance creates a conversation among the public – why is there a lack of answers? What more do they have to hide?

What’s behind the cover-up?

The answer is that successive governments and state institutions were completely complicit in the formation and maintenance of Mother and Baby Homes, and this will be laid bare even further in the Commissions findings. It is well known that Eamon De Valera’s son, who was Ireland’s leading gynaecologist, played a role in illegal adoptions. It is known that the Church and State benefitted financially from the free labour of women in institutions. The lack of accountability for these crimes stems from the actions of the present government who wish to avoid the authority of the State and it’s ruling class being undermined.

A leaked email from Niall Collins, a government TD, showed him trying to shift blame from his own parties’ failings. He does so by claiming the campaign to unseal the archive has been exploited by “very nasty people” and ends the email by telling the recipient to not let people peddle their “fake news”. It is disgraceful to see government TDs use Trump talking points when discussing a sensitive issue that impacts most families in this country.

For many survivors, campaigners, and activists, this is just another attempt from the government to hide the truth about the decades of abuse perpetrated by the church and held up by the state – similar to their attempt to withhold and seal the findings of the Ryan Commission for 75 years. Many are furious at the Green Party and their actions. They have proved themselves to be another branch of the establishment, defenders of the status quo – we just have to look at their voting record throughout their time in government to remind ourselves of this.

Members of Minister O’Gorman’s constituency gathered this weekend, with survivor Majella Ann Connolly saying, “the government need to realise how many people they hurt by signing this”. In recent years, there has been a burning desire for the separation of Church and State. Activists have been adamant on this issue as the Church still has control in sections of Irish society, such as schools, hospitals, and its ownership of the land on which this services reside makes it the largest private landowner in the state.

The vast majority of working class and young people are in favour of removing state protection of the church and unsealing the truth. In 2018, Stand for Truth demonstration was organised to show support to survivors. The demonstration attracted a large cohort of young people who listened, in horror, to the stories of how our women and communities were treated not so long ago.

The mass movements in Ireland such as marriage equality and repeal in recent years demonstrated that the younger generations want to see a full separation of Church and State. This means ending church control of state funded institutions such as schools and hospitals and taking church owned land where they reside into public ownership, with no compensation. This would mean we could remove religious indoctrination from our hospitals and schools once and for all.

We must put pressure on the government that we #RepealtheSeal of the archives of the Mother and Child homes and not hide away information from those impacted, provide for survivors and allow access to personal information. If the government refuses to acknowledge the past and tackle those issues, then no true healing will take place – it only results in prolonging the suffering of the working-class women and families who endured horrific abuse of the hands of the church and capitalist state in this country.

Outrage from below at IBSA forces action