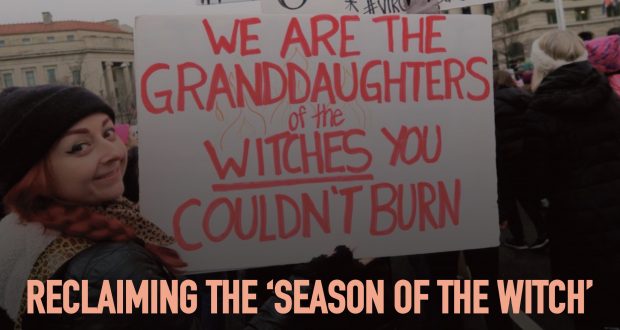 Halloween is the time of witches and ghouls. The time, according to the original pagan beliefs that signalled when the veil between our world and the Otherworld was at its thinnest. At this time, you might encounter the spirits of your ancestors, or demons or devils. In order to protect yourself from these unwanted visits, it was best to wear a mask or disguise in order to fool them. This part of the ancient tradition has conveniently survived today and the business of wearing Halloween costumes is a multi-billion-euro industry worldwide, with Americans spending approximately $3.2 billion on costumes alone in 2019.

One of the most enduring Halloween costumes is that of the figure of the witch. Dispensing with all mysticism reveals the most truly chilling aspect of the witch however, namely the reality of the 40-60,000 individuals who were executed throughout Europe and the colonised Americas in the early modern period (15th to 17th centuries) with approximately 100,000 accused and tortured.

There is a common misconception that witch hunting was a product of the backwards Middle Ages. However, the first organised witch hunts occurred during the Renaissance. As Michelangelo was painting the ceiling of the Sistine Chapel (1508-1512), elsewhere in Italy and Europe innocent people were burned alive in village and town squares accused of witchcraft. It is estimated that between 75-85% of the victims were women, the vast majority of victims being members of the lower classes.

Historical and popular accounts of these hunts often portray these events as a case of mob mentality and superstition gone wild, with the blame for these atrocities typically falling at the feet of the ‘uneducated’ lower classes. This definition of a witch hunt has largely survived into the present time. This narrative fails to take into account the centuries of Church and state propaganda, along with contemporaneous propaganda such as the Malleus Malleficarum (The Hammer of Witches) published in 1486.

Unfortunately, for the victims of these crimes, the development of witchcraft ideology coincided with the invention of the printing press in Europe. This saw the profitable proliferation and distribution of pamphlets, books, art, and reports of trials and accusations throughout Europe. In addition, religious and secular authorities worked hand in hand in seeking out supposed witches, and the arrest, imprisonment, torture, and public execution of the accused.

The demonisation of women through witch ideology bred a deep distrust of women which served to keep them out of public life and sentenced to a life of domesticity. Some of the main concerns of witch hunting included providing the ideology used to curb the use of contraception, the procuring of abortions and control over women’s sexuality. Oppression of women has been a feature of all class divided societies, and continues to be essential to the functioning of the capitalist system today. A 2018 Oxfam report, estimated that women’s unpaid domestic and care work saves the global economy US$10 trillion a year, for example.

While there is a general acknowledgement that these witch hunts occurred, their history has never fully been reconciled meaning that the figure of the witch is still played for laughs and scares. Even more perversely, the witch continues to be a source of profit in the form of costumes, figurines, movies, and books. Increasingly, however, many feminist and socialist feminist historians, activists and artists are reclaiming the witch as a symbol of women’s oppression and as a figure of rebellion against the oppressive and patriarchal capitalist system. This includes a resurgence in witch activism, with self-proclaimed witches placing hexes on public figures such as Donald Trump, some of whom are now taking credit for his recent Covid-19 diagnosis!

“We are the descendents of the witches you could not burn” has been a common placard in the global feminist movement of recent years, including repeal demos in Ireland. This interest in a feminist and left analysis of history reflects the radicalisation and politicisation taking place today globally amongst a new generation of the working class, whereby young women are at the forefront again and again. Historically, a mystical or superstitious narrative surrounding witches has helped to obscure the very real persecution of predominantly women during witch hunts. Today, the power of working class and socialist feminist struggle requires a laser-focus grounded in an analysis of material conditions with a very concrete goal – namely organising the great majority, all the exploited and oppressed – to overthrow capitalism which continues to perpetuate oppression and injustice.

‘Tis the season of the witch.