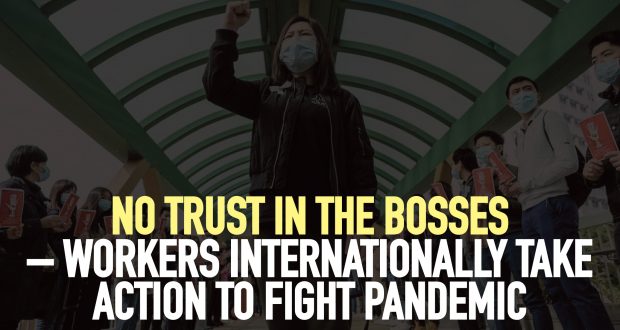 In Ireland and around the world, workers are facing the sharpest effects of the Covid pandemic. This includes healthcare workers fighting the pandemic on the frontline, workers in many sectors who face unsafe working environments, and the huge numbers facing job losses and wage cuts.

Rights on the chopping block

The pandemic was a trigger for a new capitalist economic crisis, which was already on the cards. This means fresh attempts by the bosses and capitalist governments to make workers pay the price for the crisis. The question of how workers can fight back in this new situation is an urgent one.

Debenhams workers here have waged a heroic six-month struggle for their collectively agreed redundancy payments, despite the complications of Covid, government inaction and now the threat of court injunctions. This is a critical battle which shows it is possible for workers to stand up against what is happening. However, this example is so far not matched with any kind of fighting lead and strategy coming from the trade union leaderships for workers who want to defend their health and safety, jobs or wages.

So it’s useful to look around the world to see examples of how workers are rising to the Covid challenge.

Workers’ action from below

A rise and redevelopment of strike action and workers’ struggle in the US has continued into this pandemic, with workers using strike action to fight the effects of the Covid crisis and also to take a stand in the historic anti-racist movement which has taken place this year.

This includes important actions by health workers. In the Bay Area, California, 3,200 health workers based on 8 hospital campuses run by Alameda Health System voted for a five-day strike action by 98%. This was in response to the lack of workplace safety and attempts by the employers to target their pay, conditions and healthcare benefits. The pandemic meant union organisers were not allowed to enter the workplaces, meaning rank-and-file members “got a crash course in organizing 24-7.” Other examples of health workers’ strikes have taken place in Chicago, Duluth and Minneapolis in Minnesota.

Education workers also have taken action, after a historic wave of teachers’ strikes in recent years. In Little Rock, Arkansas, teachers through their union refused to return to in-person teaching without guarantees about safety. In the University of Michigan, graduate workers took strike action on September 8th to demand increased testing and contact tracing, the right to work remotely and other Covid safety measures, and also to demand a 50% defunding of campus police.

Significantly, there are examples of workers who are not in unions and are often in the precarious economy taking action. In response to the lack of pandemic safety protocols, non-union transport workers in Oklahoma City voted to unionise with the Amalgamated Transit Union, despite anti-union ‘’Right to Work’’ laws in Oklahoma. The labour website ‘Payday Report’ has recorded over 1,100 wildcat strikes across the US since March.

These have included walkouts in Amazon warehouses and by retail and fast food workers. For many workers  this is their first time taking any kind of workplace action. “I’m not someone who ever gets involved in things like this,” said one supermarket worker, Daniel Steinbrook. “I normally just shut up and do my job.”

General strike for safety in schools

On September 15th, all unions in the Basque country jointly organised a general strike in the education sector to “demand that the Department of Education of the Basque Country puts an end to the situation of uncertainty, and adopts common measures and criteria to guarantee a safe, face-to-face and consensual return.”.

They refused to call off the strike, despite attempts by the regional government to defuse the strike with vague and unsubstantiated promises of concessions. Three protests were organised in the main cities and the strikes won the support of parents’ associations and students. This action was followed by education workers in Andalusia on September 18th.

The prioritisation of profit over public health by capitalist governments impedes the effort to defeat this pandemic. Workers must be willing to take action to demand real action. In France, workers at Covid-19 laboratories took action in opposition to the working conditions caused by understaffing, which is bringing the test and trace system to the point of being overwhelmed. In Brussels on September 16th, 7,000 health workers and supporters took part in a protest organised by worker activist network ‘Health in Struggle’ to denounce the austerity cuts which left the health service critically unprepared for this pandemic. This took place in the face of threats by authorities to ban the march. Already, the pressure on the government has extracted a promise of an extra €1 billion for the health service, although this is insufficient and doesn’t make up for the cuts taking place.

All these examples are an indication of what is possible. Trade union leaders should be putting forward clear demands for the right to health and safety in the workplace – this means that workers decide what is safe and what isn’t, and that trade unions have the right to inspect workplaces. They should also be preparing resistance to the wave of job cuts and other attacks on workers which are already underway. This includes fighting to organise the huge number of non-unionised and precarious workers throughout the economy.

This is only the beginning of a new period of attacks on working class people from a capitalist system which offers no way forward for the vast majority. We have no time to lose in preparing a powerful and organised resistance.