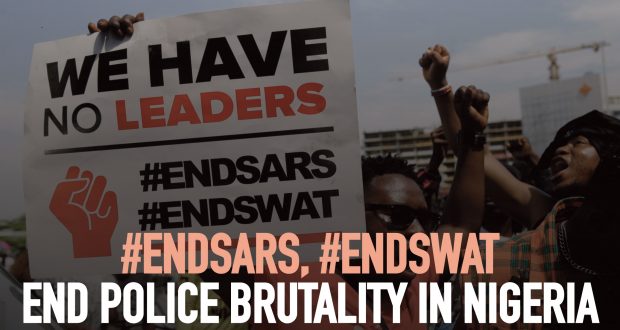 The Movement for a Socialist Alternative in Nigeria has been actively campaigning to end SARS, end police brutality and provide jobs for youth. ISA and the Socialist Party stands in full solidarity with their campaign.

This is the text of the leaflet distributed by MSA on the recent youth demonstrations.

The Movement for a Socialist Alternative, MSA, declares support for the movement of young Nigerians against Police Brutality in Nigeria, which is organized under the #EndSARS, #EndSWAT. We salute the doggedness of protesters who have sustained the movement in face of even more police brutality; at Alausa Secretariat, Ikeja, protesters have been sleeping on the protest ground for over a week; such is the exceptional sacrifice and resilience displayed by several other protesters across the country.If you wish to Join the MSA to fight for jobs for youths, against police harassment and for a socialist Nigeria

The present movement emerged in the wake of an extra-judicial murder of a young man by SARS operatives in Ughelli, Delta-State. Protests have since spread like wild-fire from one community to another and from state to states. Importantly it has had young people at the vanguard, who have funded the movement and assured its independence. The MSA, however, calls on the working people and poor not to stand akimbo as Nigerian youths fight the oppression that affects us all.

The immediate demand for this protest is an end to SARS. But in reality, the grouse of young people and Nigerians in general with the capitalist and oppressive state goes beyond SARS; SARS is only a symbol for all that is wrong and oppressive in Nigeria caused by the system of capitalism, which the people want to end. For some insight into the depth of the country’s problems, “Nigeria’s unemployed youth of 13.1 million is more than the population of Rwanda and several other African countries. Youth Population is also about 64% of total unemployed Nigerians suggesting that the most agile working-class population in the country remains unemployed” (Nairametrics, 14/08/20). But upon this grave economic situation of young people, the capitalist government enforces policies that make it difficult for them to buy basic things while the police lurk around to extort them of the little resources they have.

The government has come out to make one promise after another in the name of meeting the demands of protesters. This government must not be trusted. For example, two protesters were killed the day after the Inspector General of Police announced the “dissolution” of SARS. Amnesty International reports that 10 protesters have been killed since the beginning of protests. A government that is truly committed to ending police brutality will not send AK-47 wielding policemen and military to protest-grounds, talk-less of firing shots at protesters.

However, young people are not giving in to the gimmicks of the government. They keep emphasizing that the protest is beyond ending SARS. All issues of social and economic oppression in the country are what this movement aims to end. This is why the working people must not wait on the bureaucracy of the NLC or the TUC before they join the valiant youth fighting on the street for a better living standard for the people of this country. On September 28, the working people of this country were disappointed by the decision of labour to call off a planned general strike over the hardship that the increases in electricity tariff and the pump price of petrol have caused Nigerians. This is the time for the working people not to allow itself to be tied down to weak leadership and instead join this movement with all its demands and its weight. We charge the NLC, TUC to call for a 48-hours general strike, which is capable of forcing this regime to yield concessions to the people, as it has been proven from its jittery disposition towards the present protests by young Nigerians.

For improved working conditions for policemen and a police union

Vague promises or thousands of TV announcements cannot end police brutality. Young people must not be fooled. Police brutality is first and foremost a product of a debased system relied upon by politicians to keep the mass of the people who are cheated out of their resources at bay. The police act as a screen fencing off the political elites from the masses of people. Government officials that steal funds meant for job creation and industrialization would necessarily require a brutish police force to insulate them from the people’s anger. The Nigerian policemen also have the misfortune of lacking a union to defend officers that reject criminal orders for the brutalization of protesters for example and even for securing a dignified working condition for policemen. During this protest, young Nigerians have correctly raised the demand for a raise in the salaries of policemen. We support this and would add that this movement needs to raise the demand for creation of a police union that can give policemen a level of independence in the face of criminal orders from their bosses to clamp down on society.

Also, as long as the communities do not have control over the police, through committees elected democratically from the communities to examine the petition against erring officers and to supervise the finances of police units, there will be a corruption of the essence of the police. This can be followed up with a ban on the present AK-47 wielded by the police in civil society and for issuance of weapons of lesser lethality.

Meanwhile, the pervading underdevelopment in the country, with unprecedented unemployment, the high pump price of petrol and electricity tariff, are caused by the subscription of the country’s ruling class to principles of neo-colonial capitalism. The country’s ruling class is satisfied and wealthy from the income from oil and is not worried about the general underdevelopment of infrastructures and industry. This system must end. The working class and poor must democratically organize society under a different system, that of socialism, to build a society for the happiness of the people than for the happiness of a few billionaires.