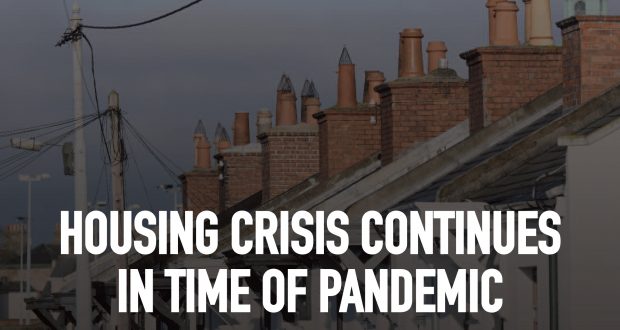 Due to government’s criminal mismanagement we are now on the brink of a second wave of Covid-19. Another lockdown before December is becoming increasingly likely in order to stop the spread of the virus. With homelessness on the rise again and the likelihood of further job losses, the government has shamefully reduced the PUP and has lifted the ban on evictions that were introduced earlier this year during the first wave of cases in March.

Of course the government did so in March because it felt a huge pressure in society over the massive anger over rising levels of homelessness and the absence of affordable homes. However, even while the ban on evictions existed, 374 tenants were faced with eviction notices in the period from March until June, illustrating how landlords, and the rich and powerful, are allowed flout the law at a whim.

The ban on evictions will remain in place until January 2021 for tenants who have experienced job losses as a result of the pandemic and are receiving the PUP. Even with this concession the majority of people are not exempt from this amendment. The government is still allowing evictions and rent increases to happen during a global pandemic. This will ultimately intensify the existing housing crisis while allowing vulture funds, private developers and big landlords to continue to profiteer at our expense.

It is important to note the effect the ban on evictions had on the number of homelessness. Within a few months the homeless numbers fell and the number of people living in emergency accommodation dropped by over a thousand people. This graphically illustrates how evictions are fueling the homelessness tsunami in our society. It also highlights the need for real rent controls and freezes, a reduction in rent to a level which is affordable, bans on evictions and better protections and rights for tenants. In order to prevent another serious hike in homelessness, measures are needed that are based on the needs of tenants not those of landlords.

Both the Traveller community and those living in direct provision were noted by the HSE to be at a higher risk of catching Covid-19 due to poor living conditions. The Irish Refugee Council’s latest report titled “’Powerless’ Experiences of Direct Provision during the Covid-19 pandemic” revealed the harsh reality of the crowded living conditions in direct provision and the inability of residents to maintain social distance and stop the spread of Covid-19.

According to the report 55% of respondents felt unsafe living in direct provision during the pandemic and 50% were unable to socially distance themselves from other residents due to shared bedrooms and bathrooms with non-family members. A recent example of the link between crowded living conditions and the spread Covid-19, was the outbreak of 25 cases at Skellig Star Hotel in Co. Kerry last April due to the deplorable social distancing measures and substandard living conditions. Residents were eventually moved to a safe and more appropriate location after more than thirty residents went on hunger strike demanding safer living conditions.

The Traveller community have also been badly affected as a result of a lack of suitable accommodation that is safe in terms of running water and electricity. This along with the county council’s complete inaction and reluctance to spend any of the traveller housing funding on improving accommodation has left the Traveller community particularly exposed. Many of their sites are overcrowded, this means the chance of Covid-19 spreading is increased when people in large groups are in regular close contact and there is insufficient space to self-isolated.

The racist and rotten system of Direct Provision must go, and we need proper investment in state built homes on public land to end the housing crisis. There also needs to be state investment to provide proper and culturally appropriate accommodation for the Traveller community.

The current housing model which resulted in a housing crisis is now on the verge of becoming magnified. According to the Department of Housing, the construction rates of social housing have plunged with only 725 social homes of the annual target of 7,736 being built this year. The minister for housing, Darragh O’Brien, cited the pandemic as the reason for only being able to build less than 10% of the target. This is not good enough.

The only way to solve the housing crisis is to build 20,000 public homes of zero-carbon quality on public lands each year for the next five years. This also happens to be the most cost-effective method of providing housing instead of selling public land to private developers and buying a portion of housing back to be used as social housing.

The government needs to restore the PUP to €350 per week and extend the ban on evictions and rent increases, as it is the working class, the essential and frontline workers who disproportionately suffer during a crisis or pandemic. The housing crisis goes to the heart of the capitalist society we live in and underscores the devastating impact that the rule of private profit has on our lives. The Covid crisis has only helped to exacerbate this.