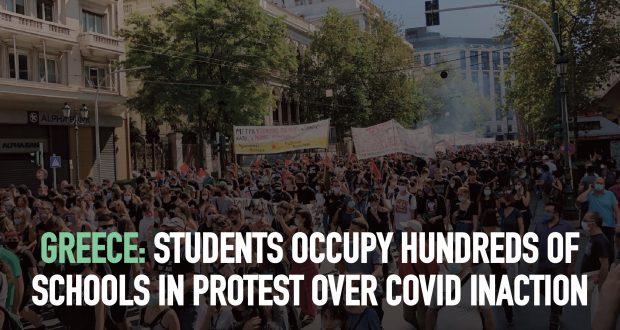 Over the last few weeks, students in Greece have been staging a large number of sit-ins in their schools to protest against the inadequate Covid-19 safety measures that have been implemented in their classrooms. It is estimated that students in 700 schools have occupied their school buildings to fight for their demands to be met.

These groups of young people are asking for class numbers to be reduced from 25 to 15, to make it mandatory that both teachers and students wear a mask, to ensure they all sit at their own desk and are safely socially distancing at least 1.5 meters from others. Much like schools in Ireland, these basic health and safety measures are not being met in educational institutes.

Both in Greece and Ireland, students and teachers alike have no choice but to work in these unsafe environments. Students risk failing their classes and teachers losing their income if they choose to not attend – their health is being risked at the expense of their learning and livelihood. Greek students explained that some parents are in the financial position to take their child out of the unsafe school environment and replace school teaching with at-home private tutoring during the pandemic.

However, other students from low-income families do not have this luxury. The system makes it so that the average working-class person feels the effects of this pandemic to a significantly greater degree than the super-rich ever will. Equally, students with health conditions cannot be expected to risk their health for school.

The Greek student protests against their government’s lack of support for educational institutes through this pandemic is something Irish students should look to as a powerful example of how a youth movement against the capitalist establishment can be built, an establishment that has been letting them down. Cases in Ireland have nearly doubled since the reopening of schools a few weeks ago and they continue to rise daily. Much like the students in Greece, children and teenagers in Irish schools are complaining of little to no social distancing in corridors, no space in classrooms and students not wearing masks.

Equally, third-level students took out loans, moved to different cities and took out leases on rented accommodation, only to be told all lectures would be online. This was announced last minute to benefit the landlords who now have students in leases and with colleges collecting fees. Recently, Minister for Health and Fianna Fáil TD Stephen Donnelly advised against an extended period of school closures over midterm, amidst reports they were going to close for longer in an attempt to minimise spread of the virus.

Now, arguably more than ever, young people are getting organised and fighting back. Irish students can look to Greek students as an example and can learn from their actions. The government is letting down the next generation of workers in the middle of a global pandemic. It is important that young people remember this and fight the capitalist system that makes this possible.