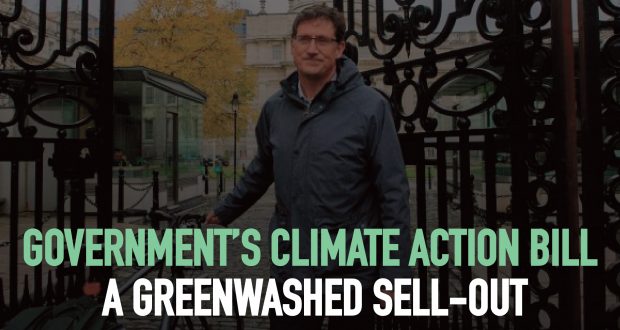 This week, the government finally published its much-anticipated Climate Action Bill. Although there were slight improvements on the version delivered by Fine Gael’s Richard Bruton in 2019, such as the introduction of a Climate Action Council and a legally binding commitment to carbon neutrality, the bill predictably falls short of anything that could be described as being even remotely radical.

For instance, the target year for achieving carbon neutrality is a distant 2050, a target which governments will only be legally bound to “pursue” rather than “achieve”. Additionally, the bill contains zero references to a ‘just transition’, even though it was taken to be a mainstay in the Green Party’s programme for government. This will hardly place Ireland “at the vanguard of EU efforts” to create a greener society, as asserted recently by Green Party leader and Minister for Communications, Climate Action and Environment, Eamon Ryan.

Carbon budgets, of which three will be introduced, lasting five years each, are to be produced by the new Climate Action Council. However, the likelihood that these won’t disproportionately burden poor and working-class people is low given that the Green Party are still in favour of regressive water charges, carbon taxes and are even flirting with ideas such as imposing minimum pricing on cheap clothing and a ban on 2-for-1 food deals.

What could be done differently?

These could be paid for using the enormous wealth that exists in Irish society. For example, Ireland has the fifth highest number of ultra-wealthy individuals in the world, and an inhumane corporation tax regime which results in some of the world’s wealthiest companies paying tax at rates ranging from 12.4% to 0%.

The €14 billion in tax owed to the Irish state by Apple Inc. alone could have covered the cost of making nation-wide public transport free at the point of use more than 20 times over! The unwillingness to use even a fraction of wealth like this leaves the government completely incapable of making the major adjustments that are required. For example, following the announcement that Bus Éireann is to cut a number of its intercity routes due to insufficient funding, Eammon Ryan took to the radio to absolve himself of responsibility by saying that it’s “up to them to manage where they see demand”.

Rather than utilise even a portion of this wealth – wealth which is ultimately produced by workers and not CEOs – Fine Gael, Fianna Fail and the Green Party instead fight to keep it in the grubby hands of a capitalist elite. It is this same defence of capitalist interests that prevents the necessary investments to make public spaces such as schools sufficiently safe to prevent the spread of Covid-19. It is this reason that the public health advice body, NPHET, is being savaged for recommending emergency measures that would stop the disease from spiralling out of control, and it is this reason that the government voted against a Solidarity-People Before Profit bill that would have restored the pandemic unemployment payment (PUP) to €350 per week so as to prevent workers from being furloughed into poverty.

Recently, David Attenborough, in an interview for a ten-part BBC podcast series on climate change, stated that climate change can only be halted by curbing “the excesses the capitalist system has brought us”. This speaks to a growing understanding among broad layers of people that meaningful climate action will not be possible unless the economic system which is driving it is challenged.

As far back as 1867, it was explained by Karl Marx that capitalism tends to destroy its two sources of wealth: nature and human beings. Since then, endless scientific investigations have piled a mountain of hard empirical evidence supporting this observation.

Worker exploitation, racism, the oppression of women and LGBTQ+ people, imperialist wars and climate destruction – these are all unavoidable outcomes of capitalist society. Overwhelmingly, its victims are working-class people, or “the 99%”. However, once organised, working-class people have the power to end this outdated and barbaric capitalist system and replace it with a socialist planned economy that places the needs of people and the planet before profit and greed.