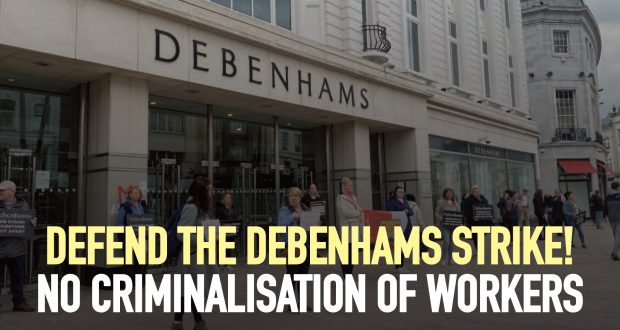 Defend the Debenhams strike – no criminalisation of workers

Now is the time for all to come to the defence of Debenhams workers. The cynical and cowardly move by liquidators, KPMG, to escalate the dispute by seeking legal injunctions comes as workers prepare to mark six months of determined action. This is happening because, on the ground, workers are winning and KPMG are losing.

During their official strike workers have employed traditional fighting tactics of pickets, protests, occupations and political pressure to force the demand for a just redundancy onto the agenda and to strangle the efforts of KPMG to extract stock – that should go toward their agreed redundancy settlement – from the 11 stores.

Since the withdrawal of their derisory offer of €1 million between 1,000 workers (the equivalent of 1 day per year served) KPMG have refused to return to the table to speak with workers’ representatives or their trade union, Mandate. Clearly a mechanism to pay workers does exist and should be utilised to ensure workers are the priority creditor, and get their agreed two additional weeks through company assets.

Proposals from Government TD’s for a stakeholders’ forum of business leaders, company law experts and trade union leaders to examine legislation are of little use to Debenhams workers. It is their ongoing struggle that has put the issues of reform, including the Duffy Cahill Report, and limitations of the Industrial Relations Act on the table. Six months of workers action cannot now be fobbed off as a down payment for future workers or legislative change. While welcome it does not settle the claim of Debenhams workers.

KPMG have so far been backed to the hilt by the Fianna Fail Taoiseach, who despite feigning sympathy, has taken no concrete steps to end this dispute. Government can instruct KPMG to direct funds from assets toward workers. The Irish state is among KPMG’s best clients. It seems this carries no weight for workers. Government sponsorship of KPMG is consistent with the flouting of Covid-19 regulations for their cronies in construction, beef industry barons like Larry Goodman and the fruit picking Keeling family.

The question posed for Fianna Fail and the Greens is clear; will they stand over the criminalisation and jailing of workers, mostly women with decades of loyal service, who have demanded nothing beyond their contractual entitlements and are openly calling for talks? This escalation will be politically toxic for Fianna fail and the Greens.

Defending the best traditions of the working class

The dispute has been characterised by grassroots trade unionism. While taking every opportunity to challenge the legal basis for injunctions and put forward the truth, workers cannot have illusions that the legal system will treat them fairly. It, like industrial relations law, is set up to favour bosses and the rich. In the coming days and weeks workers need practical assistance.

Mass pressure needs to be applied on Fianna Fail to force KPMG to back off criminalising workers and agree a resolution. A public campaign, before the injunction hearing on Tuesday 13 October in support of workers can tap into the huge support that exists. Importantly, trade unionists, activists and representatives of all opposition parties should to be on picket lines at the crucial moments to demonstrate their opposition to the injunctions and stand with workers. Workers have already shown huge determination and faced down attempted strike breaking and Gardaí on picket lines.

For trade unions too there are fundamental questions. The Debenhams dispute, if approached on the front foot, potentially represents the largest challenge to the Industrial Relations Act since social partnership. Workers have put all the key issues on the table. Now is the time for solidarity.