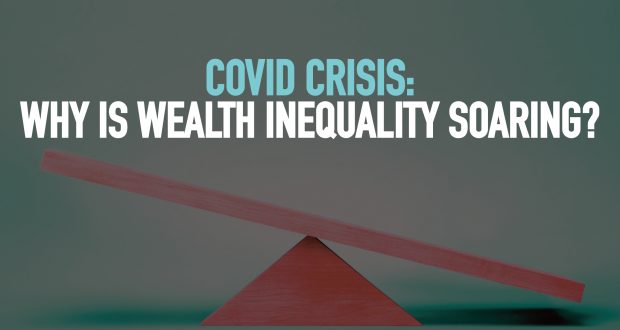 The crisis provoked by the global outbreak of Covid-19 is perhaps most associated with the tragic figures of lives ended directly by the virus. At the time of writing, this figure stands at over a million deaths, with no end in sight. There has been, at the same time, another crisis, which has seen all the cracks which already existed in a pre-Covid world – characterised by a weak “recovery” internationally from the 2008-2009 Great Recession and increasing inequality – deepen and become further exposed. It is what economists have called a “K” economic recovery, where the wealth at the top shoots up, while living standards for the rest of us go in the opposite direction.

The lack of affordable housing and the underfunded healthcare services that working-class people endure, as well as the economic pressures forcing them to show up to jobs in often unsafe conditions, have exacerbated the dangers posed by the virus. We have borne the brunt of the crisis, as has been the case with all previous crises of the capitalist system.

Alongside this social catastrophe, life for the super-rich has, at worst, remained unfazed. In fact, their wealth has continued to balloon under the pandemic as never before. They’ve sought to use the crisis to their maximum advantage, with spectacular results. Forbes, a magazine that’s above any suspicion of harbouring disdain for the ruling class, noted recently that total billionaire wealth has jumped during the pandemic from $8 trillion to $10 trillion – the most rapid growth, they comment, in the past decade.

One source of this money is the bailouts by various governments of big business during the crisis: in the UK, financial aid equivalent to $20 billion went directly into the pockets of British and European billionaires; and in the US,  “The CARES Act coronavirus relief package has only helped those gains. A loophole in March’s legislation allowed millionaires to benefit to the tune of about $1.7 million from the government. A further 133 large companies have since received $5 billion from the Treasury Department.”

As well as massive government slush funds, major companies have boosted their profits with further attacks on their workforce. Jeff Bezos, the richest man in the world, has become the first person to accumulate a net worth of $200 billion, this on the back of a massive surge in online retail during the pandemic. This came off the backs of warehouse workers and drivers who have been sent to work with little or no consideration for their health. This trend extends to other major logistics companies, such as FedEx, DHL, and UPS, who all saw profits increase during the pandemic, while none went down to the workers making their profits. Indeed, it is a feature across the board that the workers who kept society running during the height of the pandemic, having made profits for their bosses, saw no meaningful improvement in their conditions.

Even as the super-rich continue to suck up more and more wealth, they will continue to expect working-class people to pay the price of the unfolding economic crisis, just as they did after 2008. The only insurance working-class people have against these attacks is their ability to organise to fight back against them. As Malcoln X said, “we’re not out-numbered, we’re out organised”. In the workplaces, the streets, and in the communities, the working class needs to prepare itself for mass struggles ahead, and take on the ruling class.

The wealth is there to build and maintain a society which serves the material needs of all people. We need, however, to seize the wealth and profits of the capitalist class, which has been created by the living labour of the global working class and poor. On the basis of democratic planning and public ownership of the economy, we can direct the resources of society to where they are needed. Instead of the super-rich amassing obscene levels of wealth, we can use technology and this vast wealth to meet the challenges of the Covid crisis, as well as investing in housing, health, decent jobs and proper wages and conditions for all.