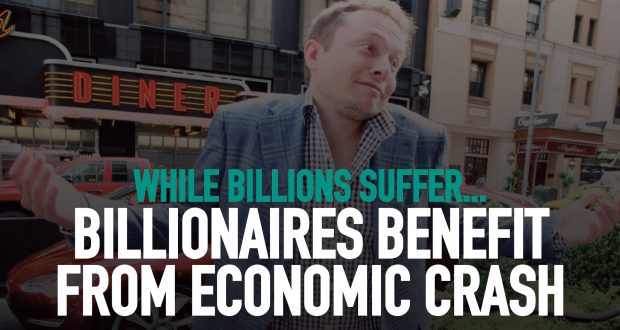 Since the beginning of the current global pandemic the world has seen the profits and wealth of corporations and billionaires increase staggeringly despite the economic crash. Between the months of March to the end of August, the S&P Index (a benchmark measure of stock performance in the US), has seen a continuous climb to a new five year high, while in the background the real economy is in turmoil and the world economy is in recession.

This is a marker of the drastic transfer of wealth to the hands of the richest individuals and corporations that has taken place over the course of the pandemic. Particular examples highlight this madness. Amazon CEO Jeff Bezos has seen his personal wealth increase by 65%, or $74 billion since the beginning of the year, while his employees are forced to work without sick leave.

Likewise Elon Musk, chief of SpaceX and Tesla, which has now become the largest automotive company in the world by share price while it regularly fires and harasses workers for trying to organise unions. Musk has personally amassed $70+ billion this year alone, before plunging by $16 billion in one day in the first week of September.

Bailouts for the rich

How is this happening? The answer can be found in the fact that the US Federal Reserve has spent over $2 trillion to bail out corporations, with another $4 trillion funnelled into the stock markets to back up profits, share prices and fortunes of the billionaires. On a smaller scale the ECB and other central banks have acted similarly towards their respective capitalist classes.

In the meantime, the working class of the world is forced to bear the burden of another massive capitalist crisis and the dire response by capitalist governments. The rates of unemployment worldwide have skyrocketed, but as the above illustrates, support is skewed massively to corporations rather than struggling people.

The Irish government has decided to reduce the Pandemic Unemployment Payment from €350 to €300 from 17 September in an effort to get people back to work. This attack on the working class is mirrored the world over, as countries prioritise the financial wellbeing of their wealthiest over the health and livelihoods or their working people.