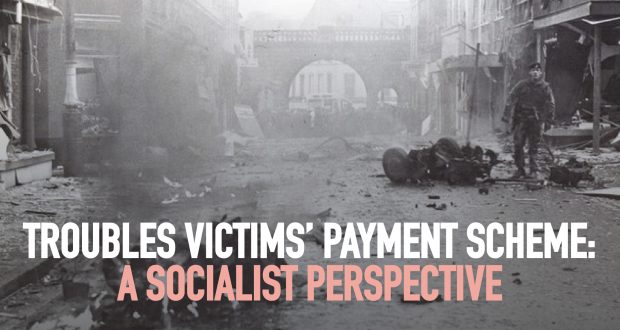 The controversy around the Victims’ Payment Scheme is an important example of how, decades into the ‘peace process’, there has been a failure to deal with the legacy of the Troubles. Instead, sensitive issues like this remain part of the tit-for-tat between sectarian forces, with victims and ordinary people suffering the consequences.

After the framework for the scheme was given approval by the Westminster government, Sinn Féin’s Vice-President and Deputy First Minister Michelle O’Neill refused to designate a department to administer the scheme, in protest at the exclusion of many of those convicted for paramilitary offences. This resulted in a successful legal challenge, with responsibility for the scheme then being delegated to the Department of Justice, headed by Alliance leader Naomi Long.

Exclusions from the scheme

Serious deficiencies do exist in the scheme. To qualify for assistance, the applicant must prove permanent injury as a result of a conflict-related incident. This can include psychological injury, such as post-traumatic stress disorder. However, only those who directly witnessed an event such as a shooting or bombing are eligible. This means many of those defined as “secondary victims” – such as family members kept away from a scene – are not eligible, even if the event had a permanent impact on their mental health.

The most controversial aspect of the scheme is the exclusion of those who served a prison sentence of more than 30 months. An estimated 30,000 people went through the prison system in the course of the Troubles. Many young people were driven into the paramilitaries as a response to the repression of the state or the actions of paramilitaries on the ‘other side’, including incidents which directly impacted them or their loved ones.

While many ex-paramilitary members on both sides are excluded from the scheme because of these conditions, only a handful of those in the state forces have ever been convicted of Troubles-related atrocities. They will be able to use the scheme to top up existing payments to a maximum of £10,000 per year. This is viewed by many as creating a “hierarchy of victims”. At the same time, it is understable that many recoil at the idea of those who took part in atrocities committed by either paramilitaries or the British state receiving such a payment.

The example of Christy Cummings has been particularly highlighted to show the exclusionary nature of the scheme. In 1997, working as a doorman at the Glengannon Hotel, near Dungannon, he was shot while obstructing a potential LVF massacre at the premises. Another doorman, Seamus Dillon, was killed by the loyalist gunman and Cummings was left paralysed from the chest down. As he was an ex-prisoner, having served almost seven years for IRA membership and planting a hoax bomb, he didn’t receive compensation and he now believes he won’t secure a victims’ pension for the same reason.

An inflammatory tweet, now deleted,  from prominent Sinn Féin MLA Martina Anderson has acted to further polarise this contentious issue. She claimed that the scheme would mainly benefit those who took part in “Britain’s dirty war in Ireland”, “those involved in collusion” and British troops – for instance, paratroopers involved in shootings of unarmed civilians in Ballymurphy in 1971, or in Derry on Bloody Sunday in 1972.

This is blatantly not the case. In reality, Martina Anderson’s tweet reflects a self-serving narrative which portrays the conflict primarily as a dual between various combatants. This ignores the reality that an estimated two-thirds of those killed during the Troubles and an even higher proportion of those injured were civilians.

A look at who brought the recent legal challenge against the delaying of the scheme illustrates who will benefit from it – Jennifer McNern, who lost both legs in an IRA bombing of the Abercorn restaurant in Belfast city centre, clearly a civilian target; and Brian Turley, one of the ‘hooded men’ tortured by the British Army in 1971, clearly a victim of  “Britain’s dirty war” and not a perpetrator of it. Indeed, the ‘hooded men’ are still campaigning for justice fifty years on. In reality, while Anderson’s tweet may reflect the real anger of ex-paramilitary members on this issue, it is also in keeping with the approach of the sectarian forces to seek to polarise opinion on legacy issues, rather than attempting to find consensus.

The Socialist Party believes there should be no further delay in making payments available for those victims currently eligible. The comments from Naomi Long that the scheme could take up to six months to establish, with another 12 to 18 months before payments are received, will be of great concern.

That doesn’t mean that the scheme should not change. A judge-led board will be established which, on appeal, can grant access to the scheme to others currently excluded, but it will be tied to strict guidelines, including considering whether the claimant was injured “at their own hand” or if they were convicted of “causing serious harm” to others.  Like many such bodies, this board will not be viewed as impartial.

The question of who is eligible should not simply be left in the hands of either sectarian politicians or the British state, all of whom seek to push their own narrative on the Troubles. Instead, this should be decided by a body made up of genuine representatives of victims from across the spectrum. The trade union movement – representing almost 250,000 workers here – could also play an important role in such a body, particularly rank-and-file activists drawn from both sides of the community, and neither.

Socialists would support payments to all those left injured by the Troubles, including ex-combatants, except for those responsible for atrocities in which civilians were consciously targeted on a sectarian basis or at the behest of the state. This would be a small step towards healing the wounds of a past which continues to traumatise many.

Failure to deal with the past

The question of the victims’ payment points, of course, to a much larger problem of how to deal with legacy issues from the Troubles. Sectarian forces on both sides and the British state in particular may hope that, with the passage of time, these issues will fade away. That isn’t happening. In reality, a new generation of victims’ families are taking up the struggle for justice for their loved ones.

Socialists support measures that can deliver truth and justice for victims of the Troubles and their families. We believe a genuine accounting with the past would be beneficial in providing people a real assessment of the role played by the contending forces during the conflict. However, we have no faith in the sectarian parties or the state to bring this about in a manner which does not simply create new sectarian battlegrounds.

Instead, it is necessary to look to the forces which stood against sectarian conflict and repression – most importantly, the trade union movement, particularly its shop stewards and grassroots activists, who took risks to unite workers in opposition to the actions of the sectarian forces.

Socialists have confidence in working-class people today to expose the truth and scrutinise the role of the sectarian forces and the state, just as they stood up to them during the conflict. This could mean some form of wide-ranging enquiry into the Troubles, which would not be in the hands of the state or establishment parties but made up of respected trade unionists from both Protestant and Catholic backgrounds and those with a record of campaigning on these issues from the standpoint of ordinary people, including human rights groups.

Such a process – alongside the building of a genuinely cross-community socialist alternative – could  be part of creating a real peace process, one that actually seeks to create the basis for the “reconciliation, tolerance, and mutual trust” that the Good Friday Agreement promised over twenty years ago but has failed to deliver.