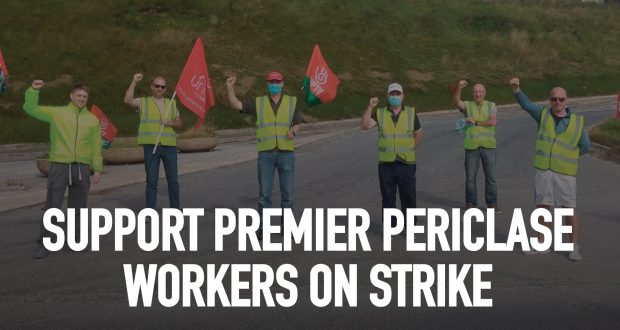 Workers in the Premier Periclase magnesia plant in Drogheda have been engaged in strike action since the 17th of August, following attempts by management to derecognise trade unions active in the workforce.

Workers in both Unite and SIPTU are involved in the struggle, which saw the company cease paying pension or sick pay. Twenty experienced full-time workers were laid off, while contractors were kept on. All this in spite of long standing collective agreements. Unfortunately, fitters and electricians from the Connect trade union have continued to work inside the plant, even while other workers from such as post office workers have refused to cross the picket.

Throughout this struggle, the company has not engaged in with the workers. When the company and the unions went to the Workers Relations Commission, it was the view of the workers that they were not serious, and instead the company was trying to delay proceedings while they attempted to make the changes necessary to continue production with non-union workers.

The company engaged in bullying tactics, sending a letter by taxi to the picket line saying the workers could come back to work only on their terms and without union recognition, trying to divide the workers.

This, like the Debenhams struggle, is yet another example of companies ruthlessly utilising the Covid-19 crisis to savagely attack pay and working conditions. Up until the company realised that it could use this crisis to bust the unions, these employees were considered essential workers and put themselves at risk going to work throughout the summer.

The dispute could be easily won if the electricians and fitters from Connect joined the strike. These workers occupy an indispensable role within the plant, and naturally their jobs as unionised employees will be targeted next. Activists from Connect, Unite, and SIPTU should be informed of the situation in the Premier Periclase plant, and pressure should be put on the union leadership to call for an all out strike. While the leadership may be hesitant to commit itself fully, once information about the disgraceful way that these workers were treated reaches the rank and file membership, the leadership will have no choice but to commit itself fully. This battle is not just about the position of unions with this particular plant, but could have ramifications throughout the country.

Workers on the picket line received great local support, now they need the full support from the union leadership.