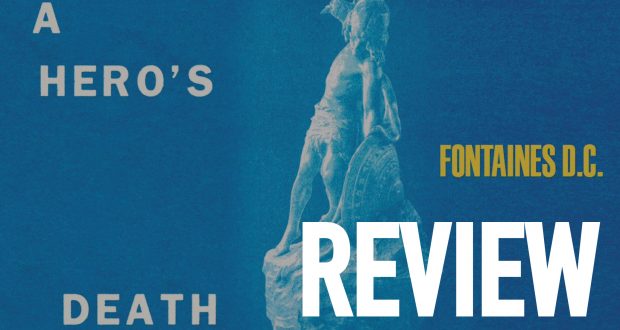 On the 31 July, Fontaines D.C. released their widely anticipated sophomore album A Hero’s Death. The second album is a milestone achievement in the flowering evolution of the band. While Dogrel was grittier and affiliated with the recent post-punk wave, A Hero’s Death has experimented with softer melodies and at times vocal harmonies that are reminiscent of the Beach Boys. A ‘Brian Jonestown Massacre’ influence is noticeable throughout the album.

A Hero’s Death dazzles in many respects. The album cover art is a depiction of the death of the Irish mythological hero, Cú Chúlainn — an appropriate choice considering the album-title. Dublin iconography and references are heavily featured throughout the album. Eagle-eyed connoisseurs of Dublin art and imagery will probably notice that the statue of Cú Chúlainn used in the album artwork is based on the real-life Oliver Sheppard statue. The Sheppard statue of Cú Chúlainn resides in Dublin’s General Post Office. Although the Fontaines have travelled and performed as far away as the United States, Dublin life and Irish society are still recurring sources of inspiration for the band.

Problems of everyday life is a prominent theme on the album. Modern bands mostly sustain themselves through exhaustive and extensive gigging. The idea of musicianship guaranteeing a comfortable lifestyle is one that, for the most part, belongs to the past — if it ever existed. Considering most bands fund themselves through round-the-clock touring, modern musicians have fewer sources of income than bands who rose to stardom in the pre-download age. It could be said that there has been a kind of ‘proletarianisation’ of breakthrough bands. Granted, they don’t work in factories or in ordinary workplaces. With that said, their income and livelihood is very much precarious — especially in the early stages of a band’s career.

A Hero’s Death captures this burn-out in “You Said”. The following lyrics are revealing:

Alienation, fatigue and a sense of being grinded-down is part and parcel of life for aspiring musicians. Of course this is not limited to musicians, but evokes the grinding effects of capitalist society on most workers, especially precarious workers and young workers, today. This is the proletarianision aspect. It’s worth mentioning that only in the recent period have Grian Chatten and the other members felt they could decline offers to perform gigs. This reflects the pressure, both economic and cultural, that aspiring musicians experience.

The hook-line of the album’s eponymous song is a welcome and uplifting message. There may be an ambiguity with the exact meaning of the hook (as mentioned in various interviews by Grian) but when you connect it with the content of the song as a whole, a message clearly appears which seeks to affirm a combative, overcoming and forward-thinking approach to life. The message is undoubtedly optimistic.

It is objectively beneficial for society to have positive male cultural-icons. It’s a sign of a changing society, one that’s been changed by grassroots social movements and where consciousness and attitudes have moved forward, when for example, you see young male guitarists wearing Repeal jumpers. Much better this than macho aggressive male icons or snake oil salesmen who blame feminism and “Cultural Marxism” for societies’ problems. The post-punk scene is a healthy cultural pole and reference point for young men who are alienated in capitalist society. Hats-off to Fontaines D.C., IDLES etc. for acting as healthy and inspirational cultural influences for young men.

The mantra of “I was not born – to do another man’s bidding” is also a breath of fresh air (be it intentional or not) for a generation of precarious workers who are growing further restless with low-paid, exploitative work while corporate executives and big business amass greater and greater wealth through gross exploitation of the working-class.

Grian Chatten has described the song “Sunny” as the experience of having a dialogue with his imagined future son. The harmonies in this song are dreamlike and elating. Perhaps unintentionally, the song describes the process of emerging from a depression:

The second verse may be interpreted as closing an eye to negative influences in one’s life. Granted, that may be the interpretation of the reviewer, but it’s still one the reviewer feels mentioning.

The final song on the album is arguably the most positive, even though, ironically, it is titled “No”. Again, Chatten sings about important personal matters; love-had, love-lost, emotional intelligence and the pain that it can carry:

The song carries a message of embracing the process of maturing and accepting the everyday, even when the mundane can be underwhelming:

“And please don’t lock yourself away
Just appreciate the grey”

The moral of the song is to reject living in fear and to welcome the every-day; even moments of ebb and ordinariness.

A Hero’s Death in Lockdown

It is a noteworthy fact that the promotion and run-up to A Hero’s Death was June 2020. This time will be etched into the minds of many as a period of lockdown fatigue, and the process of the state gradually easing restrictions and movement of people. For myself, I’ll remember A Hero’s Death as a reference point for this period — especially the Jools Holland moment as an uplifting moment in what was a turbulent time. My instinct at the time was I wasn’t the only person in the world who felt that way about the Fontaines’ new music — and the success of the album in the charts confirms that.

There’s much that is enjoyable and relatable in the music of the Fontaines. Their overall approach to life seems to be a humble one. Their feeling of unease when it comes to compliments and feedback is an indicator of humility and a down-to-earth view of themselves. Here’s to Fontaines D.C. making music on their own terms, and to the artistic growth, roundedness and sincerity which characterises their music.