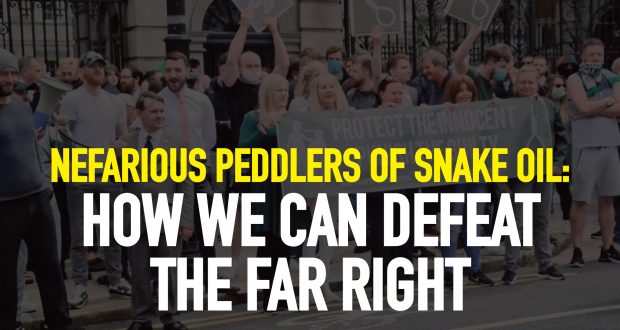 Nefarious peddlers of snake oil: How we can defeat the far right

In many countries around the world, right-wing populist, far-right and racist forces are on the rise – most sharply expressed in the coming to power of figures like Trump in the US and Bolsonaro in Brazil. This is fundamentally the result of a capitalist system which is heaping increasing misery on working-class people, combined with the lack of an anti-capitalist alternative to offer a real answers to the crisis. In general, the far right has not been able to make political breakthroughs in Ireland, and its candidates received poor results in the last general and local elections.

Notwithstanding this, Ireland is not immune to this trend and far-right elements here are increasingly confident and organised. Since the Covid-19 lockdown this has manifested in sizable street protests in the South. In June, hundreds joined a protest outside the Dáil based on spurious and homophobic attacks on Children’s Minister Roderic O Gorman. On 22 August, a crowd of perhaps 1,000 plus people took part in a protest under the banner of ‘Health Freedom Ireland’ protesting lockdown measures.

At the core of these protests are conscious and violent far-right forces. At the ‘Health Freedom Ireland’ protest, a small group of counter protesters were subjected to a violent attack by a larger group which had come prepared with weapons such as hammers. At the same time, these protests have also been able to draw in a broader section of people who may not even know about the nature of the forces behind the protests. It is incumbent on socialists and anti-fascists to understand why this is.

Undoubtedly the “anti lockdown’’ protests were boosted by “Golfgate”, which put on open display the hypocrisy and sense of entitlement of Ireland’s political establishment. More broadly, the government’s response to Covid-19 has been inconsistent throughout because they won’t break with an economy which puts profits over peoples’ lives – when rampant worker exploitation at meat plants was at the centre of a new surge in Covid-19 cases, ordinary people in the Midlands were subject to strict measures while some of the offending plants themselves continued to operate for days afterwards.

At the same time, lockdown measures have caused real psychological and social hardship which is wearing away at people more and more and this creates and opening for those who try to claim the virus is fake or exaggerated using conspiratorial thinking.

Those views are still rejected by the majority who correctly see that they attack the idea of solidarity. In recent days, a campaign on social media has tried to promote the idea that the numbers of Covid-19 deaths is massively exaggerated because the majority of those who died had underlying health conditions – an insult to the huge numbers of people who suffer with ill health. Despite this, the failure to control the pandemic and the likelihood of continued measures into the future makes it likely that these ideas can continue to get an echo among some. The far right will clear continue to try to win support by other means also – obviously including spreading racist poison and trying to scapegoat migrants and minorities for the crises in society.

While these groups will spread all manner of conspiracy theories, one conspiracy they won’t talk about is out in the open for all to see. Capitalism is a system where the economy and society are run for profit, owned and controlled by a tiny minority who accumulate wealth at the top while misery and deprivation increase at the bottom. That’s why we have a housing crisis, mass unemployment, and ever increasing insecurity alongside more wealth than the world has ever seen – more than enough to provide a decent future to every person. The far right supports that system of capitalism and helps to preserve it by turning working-class people against each other and distorting the real source of our problems.

You can’t fight the far right by defending the status quo. That’s why we must now work to build a popular opposition to the politics of racism and division and link it to the development of a real alternative for working-class and young people. Recent experiences have shown that small counter demonstrations with confrontational tactics have jeopardised the safety of anti-fascist protestors and can drive some people further into the arms of the far right. We need to work to expose the politics of the far right for what they really are and to build support among workers, young people, migrants and people of colour and LGBTQ+ people for the need for a serious challenge to these forces.

And crucially, to effectively combat the far right we must build a real working class fightback against the new capitalist crisis – the Debenhams workers have given a real, living example of how this is possible – and build the socialist movement to end this system which is now giving rise to the redevelopment of dangerous and reactionary trends all around the world.