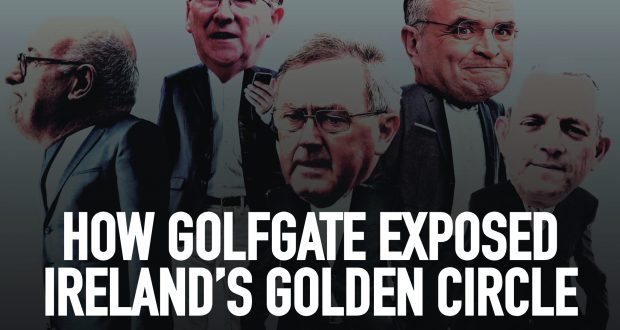 The scandal surrounding “Golfgate” in August gave us a glimpse of the strings that tie the different sections of the capitalist establishment in Ireland together. It had all the appearances of an exclusive golf club frequented by the rich and powerful.

Lacking any awareness or shame, and far exceeding the HSE guidelines, representatives and individuals from the business, political, legal, media and banking establishments mingled at an event organised by the Oireachtas Golf Society in a hotel in Clifden, Co. Galway.

Thrown into this mix of 81 was the Ambassador to Morocco, a state headed by the semi-feudal and corrupt dictatorship of King Mohammed VI.

The public outcry forced the immediate resignation of yet another Minister of Agriculture, Dara Calleary, and some days later a reluctant EU Commissioner Phil Hogan. Working-class people have patiently and diligently abided by the various measures introduced to tackle the virus in the last six months, and were rightly incensed.

During this period many have avoided attending funerals or visiting loved ones; have been forced to stay at homes with their kids as schools have closed; and have cancelled weddings and major family events. This stands in stark contrast to the flagrant flouting of and an arrogant indifference to the health guideline displayed by those who congregated in Clifden. Like the meat barons, another key part of the ruling class in this country, they clearly believed they were above the law.

Senators, TDs and councillors from Fianna Fáil, Fine Gael and Labour were in attendance, as was right-wing independent Noel Grealish. Another notable attendee was Brian Hayes, head of the Banking & Payments Federation Ireland (BPFI).

Hayes was a Fine Gael Minister and then MEP before entering the upper echelons of the corporate world, a path that has been well trodden by many representatives of Ireland’s capitalist parties— having served their time as political servants to these corporate interests.
The BPFI is the main lobby for the major financial institutions in the state, whose connection with the political establishment is a long and insidious one.

When they, alongside the major property developers, helped crash the economy in 2008-2009 they were dutifully bailed out to the tune of €64 billion. The BPFI represents not only the major banks, but also vulture funds whose ruthless profiteering has been facilitated by the state. Hayes’ former Fine Gael colleague, then Minister for Finance Michael Noonan, said in 2015:

“You criticise me for not intervening with vulture funds. Well, it was a compliment when they were so dubbed in America because vultures, you know, carry out a very good service in the ecology.”

The attendance of a sitting Supreme Court Judge, Seamus Woulfe, speaks to how interwoven the judiciary is with other sections of the ruling class in this state. Like all judges in the Supreme Court he is a government appointee and like much of the judiciary he was privately educated and connected to one of the establishment parties before his appointment.

In Woulfe’s case, he was an active member of Fine Gael and was appointed Attorney General by Leo Varadkar in 2017. This gives lie to the idea that we have a judiciary independent of political and class considerations, quite the opposite in fact. While Debenhams workers can be harassed and arrested by the state for fighting for enhanced redundancy, it is highly doubtful that anyone involved in Golfgate will face the rigors of the law.

James Connolly once wrote that: “Governments in capitalist society are but committees of the rich to manage the affairs of the capitalist class”. This is certainly true of the Ireland of 2020, which is searing from the Covid-19 pandemic and a major economic downturn— with working-class people again bearing the brunt.

The existence of this rigged political and economic system has real and devastating consequences for the lives of working-class people and our environment. It is for this reason that we must build a socialist movement to end its rule once and for all.