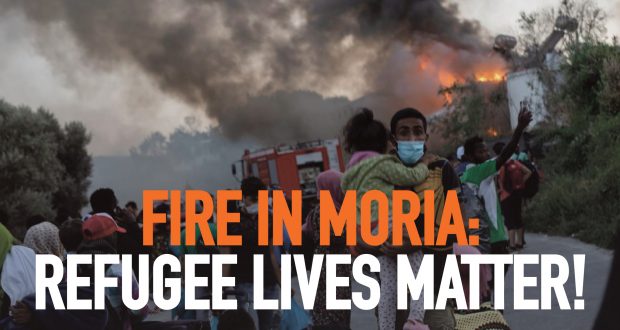 The horrific fire that has destroyed Europe’s largest refugee camp, Moria, on the island of Lesbos in Greece, has once again shone a light on the ongoing human tragedy of the refugee crisis. Thousands of refugees have had to flee the camp and are now stuck in the surrounding hills and on a road outside the island’s main city Mytilene. Greek police lined the road and refused to allow them to enter the city.

The Greek government is blaming the refugees for the fire, linking it to the announcement of 35 coronavirus cases in Moria. In doing so they ignore the conditions that gave rise to such a disaster. As Médecins Sans Frontières has described:

“Almost five years of trapping people in dire conditions has led to tensions and despair. This has only increased over the last five months due to restricted movements in the camp, hastily justified as a public health measure amidst the COVID-19 pandemic. Following the recent confirmation of positive cases of COVID-19 among the camp’s residents, the increasing restrictions on people have made the situation unbearable.”

The response of the European Union has been pitiful, only agreeing to assist in the transfer of 400 unaccompanied teenagers to another camp on Greece’s mainland. Yet it is the racist immigration policy of the EU that has kept refugees in overcrowded and squalid conditions by border rules designed to stop them reaching mainland Europe.

The EU’s ‘Fortress Europe’ policies are increasingly aimed at deterring refugees by making travel across seas more dangerous and creating a hostile environment for those who make it to the EU’s frontiers. Alongside that there has been a process of outsourcing the refugee problem to other countries, such as Turkey and Egypt, with horrific human rights records.

In recent weeks the British press has been full of scaremongering regarding refugees crossing the English channel. One figure from Moria illustrates why  refugees are risking everything to come to Europe: 70% of those in the Moria camp are from Afghanistan, a country still war torn and poverty stricken due to almost two decades of Western imperialist intervention.

The right-wing politicians who fail to deal with the housing and unemployment crisis tell us we must first “look after our own”. Socialists say that refugees are our own; they are working class and oppressed people fleeing the horrors of war. We need to build a movement that will fight for “our own”. There are enough resources in our society, currently in the hands of billionaires, to ensure there is no need for anyone to live in refugee camps, but this requires a challenge to a capitalist system based on poverty, war and racism.

Xekinima (ISA in Greece) has put forward the following demands: 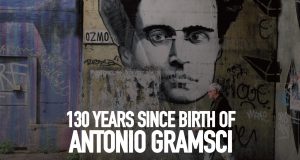