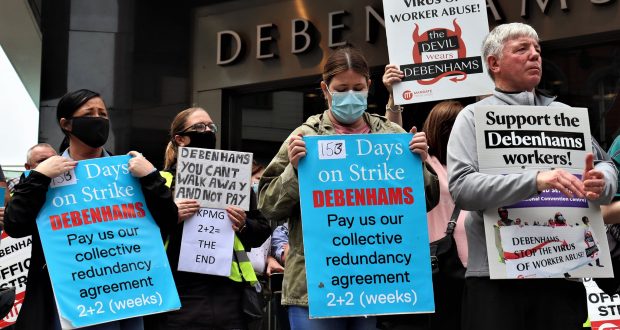 No sooner were the Debenhams shop stewards given the gist of a proposed settlement to their struggle for a just redundancy from the Mandate General Secretary, Gerry Light, than it was leaked into the media with a positive spin and additional details that were not even presented to the workers.

Debenhams workers described how relatives and friends began texting them congratulations. However this was not an occasion for celebration. The reality is that, whereas the fight is over two week enhanced redundancy on top of the statutory minimum – which for all the workers would come to a grand total of some €13 million – all that is being offered is a paltry €1 million which would average at a mere €1,200 per worker.

Had the Debenhams shop stewards been permitted to participate in the contact with the liquidator from the outset the whole month of August would not have been wasted discussing a derisory sum. The first reaction of the shop stewards instead would have been to tell the liquidator to put a zero at the end of that €1 million and then start talking.

The truth is that the €1 million being promised would be dwarfed by the amount set aside for the business creditors and the Revenue. Mandate’s leadership want to move with haste to a ballot of the members. The custom and practice of the shop stewards deciding if an offer is worthy of a ballot has been set aside. They are banking on the fact that a majority of the Debenhams workers have not actively participated in the pickets and are more likely to accept the deal.

However, the fact that they did not participate actively in the struggle is something for which Mandate have to take a share of the blame. 97% of members voted for action in May but Mandate failed to articulate a strategy for struggle. Instead it was left to shop stewards to take the initiative and activate as many of the members as possible. The fact that rank and file initiative got some 200 plus workers consistently active in the struggle over five months is remarkable.

A better deal is possible

Subsequent to the media leak the shop stewards have been in overdrive correcting the perception. Their demand that this deal not go to ballot was absolutely correct. The many interviews done by shop stewards and particularly the occupations of the stores in Henry Street Dublin (albeit short-lived) and Patrick Street Cork brought it home to everybody that the deal was unworthy of a ballot. Mandate were let off the hook when KPMG withdrew the offer.

However by offering something outside the statutory minimum an important principal has been conceded. New tenants are due to move into a number of the store spaces in October so matters are set to come to a head one way or another. The occupations and the massive public support have injected fresh energy into the struggle. Pressure now needs to be heaped onto the government, and Fianna Fáil in particular, to instruct KPMG to make a proper offer.