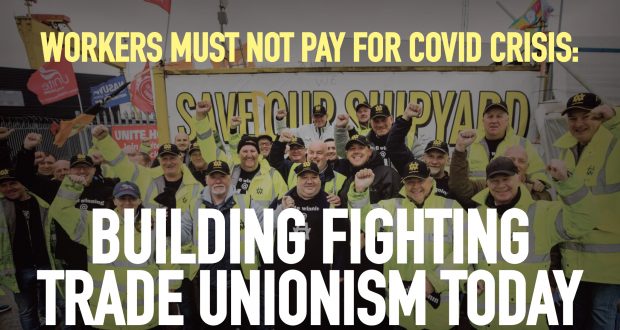 The Stormont Department for the Economy is warning that the jobs market is “heading back to the 1980s”, with an estimation that unemployment in the months ahead could well exceed 100,000. A similar situation is reported in the South, with unemployment figures of 28% being recorded for April.

This mirrors what is happening throughout the world, as capitalism looks to defend its profits at the expense of workers’ livelihoods. Employers across the board are looking to wage war on pay, jobs, terms and conditions.

There is no doubt that the pandemic and lockdown have affected industries across the board, but it is a myth to suggest that employers engaging in mass layoffs and redundancies do so because they have no other option.

British Airways (BA) is one example that illustrates this simple truth. They are threatening to terminate their entire workforce of over 42,000 employees. Under these proposals they will only allow workers to return only if they accept drastic cuts of up to 70% of their wages.BA was making massive profits prior to the crisis, with an operating profit of almost £2 billion in 2019 alone, with substantial reserves of £2.6 billion and shareholder equity £5.8 billion that would likely be sufficient to weather the storm until the end of 2021. BA has also accessed £300 million from the UK’s Covid-19 finance facility, while owners IAG have accessed €1 billion from the Spanish government. This money is being used to pad out the profits of the shareholders rather than protect jobs and livelihoods of working people.

Likewise, stationery chain Eason’s plan to close their shops in the North and cut 144 jobs in the process, but shareholders are due to share a €20 million payout in the autumn among themselves, while their workers are left out to dry.

The truth is that these job cuts are not made by poverty stricken employers. In most of these instances, cuts are linked to maximising profitability at the expense of the workforce. We do not have to accept this.

It is not a foregone conclusion that the attacks on workers’ jobs must proceed unabated. Recently, we have seen important examples of workers utilising their collective strength to take on employers and secure victories.

Last year, workers at Harland & Wolff in Belfast secured the future of the iconic shipyard after a historic nine-week occupation. When the owners went into administration, they were told that the jobs must go – there’s nothing that can be done, it’s what the market dictates. Yet the jobs were saved. Had it not been for the workers taking matters into their own hands and taking physical control of the yard after administrators were brought in, the firm would most likely simply have gone into liquidation and those jobs and skills would have been lost.

Likewise, the walkouts from meat processing plants that occurred at the start of lockdown in the North illustrate the power that workers have. Faced with callous employers and their disregard for health and safety, workers walked out, demanding adequate PPE, social distancing and other measures, winning important concessions. It has been workers and their trade unions who have taken the lead in standing up for health and safety

It is these tactics of occupation, walkouts and strikes that get results. What both the meat plant workers’ struggle and the shipyard occupation show plainly is that, while it can seem that the employers hold all the power, in reality we do not have to accept their diktats nor those of the ‘free market’. Working-class people can win when we stand together.

Unfortunately, throughout the course of the pandemic, we have consistently found union leaders kowtowing to ideas of ‘national unity’ and partnership with the bosses. Frances O’Grady, of the British TUC, called for a “national council of reconstruction to rebuild the country”. Unfortunately, this approach has led to inaction, inactivity and an unprepared response to the employers’ onslaught.

We need to rebuild fighting trade unions, in which the members and their elected reps have control, not far-removed and unaccountable officials. Key union officials should be elected, subject to recall and paid a worker’s wage, not a bloated salary which disconnects them from the lives of their members. To transform the unions along these lines will require a struggle. All workers should join and get active in a union, and link up with others to turn them into weapons fit for battling the bosses and the politicians who serve them.