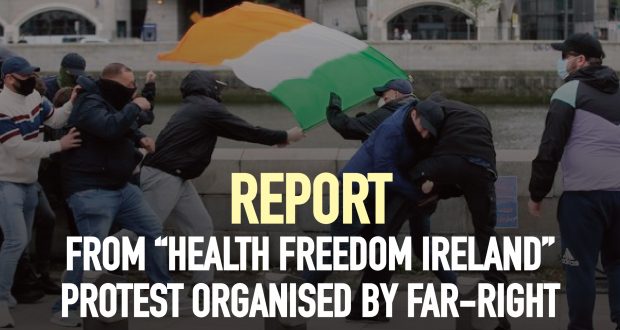 The inconsistent nature of the current government Covid restrictions coupled with the deep and justified anger in society at the blatant hypocrisy of politicians and prominent establishment figures attending a golf outing in contravention of those very same restrictions undoubtedly gave a late boost to the attendance at a protest on Saturday organised by a coalition of reactionary groups and conspiracy theorists under the banner of ‘Health Freedom Ireland’, which numbered in the high hundreds with people travelling from across the state.

The event was built primarily on social media. The FB group “Ireland Breathes Free” was set up on 1 August and has over 8,000 members. It is linked to Yellow Vests Ireland, Irish Vaccine Awareness and other similar pages. Right-wing online fake news sites including the Liberal.ie and Gript also threw their weight behind the protest. Undoubtedly many who attended the protest were unaware of the backward politics of the organisers.

Despite more that 2,000 deaths on this island and tens of thousands of cases of Covid detected, there is a constituency of people who for a combination of reasons are susceptible to these initiatives, while not necessarily holding the racist views of the organisers. It can be a case that they have not been directly impacted by the virus themselves personally nor their family and acquaintances and have a blanket mistrust of all reporting on the pandemic. This, combined with the mental health impact of the lockdown measures and economic insecurity, can make people who seem to authoritatively claim that the lockdown is unnecessary and that a return to ‘normal’ is possible now appear appealing.

This mobilisation is a further step up from the mid hundreds that a similarly configured coalition mobilised outside the Dáil on 13 July, fuelled by a homophobic campaign targeting Green Party Minister for Children, Disability, Equality and Integration, Roderic O’Gorman, on the spurious basis that he shared problematic views attitudes attributed to veteran British gay rights activist Peter Thathcell. Both of these mobilisations compare to the more routine dozens that have tended to assemble at the GPO frequently on Saturdays in recent months.

The main publicised demands around last Saturday’s protest centred around objections to obligatory mask wearing and opposition to compulsory vaccination in general, but also specifically if a vaccine for Covid is developed. This was underpinned by a conspiracy based scepticism about the reality that Covid is a highly infectious virus that has resulted in the deaths of hundreds of thousands globally and is leaving many of its survivors with lasting health impairments.

Present on this were prominent individuals from the ‘Anti Vax’ scene, members of the fascist National Party, the far right Irexit Freedom Party (which includes the ‘lay litigator’ charlatan Ben Gilroy as a member), Yellow Vests Ireland, and a layer of semi-organised racists — some of whom arrived with barely concealed weapons intent on inflicting violence on counter protesters who on this occasion consisted of a small group, principally of young people dressed in the style of anarchist black blockers. Incredibly, Senior Counsel Una McGurk who is a member of the International Protection Appeals Tribunal, which rules on asylum applications, spoke at the protest.

The small group of counter protesters who initially assembled at Liberty Hall voted by a majority to position themselves across the road from the Custom House, by the river, in closer proximity to the protest. When they set off in that direction, as soon as they passed under the Loop Line rail bridge there was a charge towards them by a significantly greater number of mainly younger men, among whom individual known fascists have been identified on camera.

One protester was knocked unconscious and others received blows before Public Order Unit Gardaí interposed themselves, drawing batons before forming a line and pushing back with some force the anti-fascists to Butt Bridge. While confined to Butt Bridge the Gardaí permitted known reactionaries, including a ‘broadcaster’ from Gript, to film the anti-fascists at close quarters. Eventually, after an hour, the anti-fascists agreed among themselves to march away from the protest to the GPO and disperse in safety.

It is clear from social media sharing of the protest as well as the attendance itself that there is a broader buy-in to some of the themes around which this mobilisation was called. Furthermore the handling by this government of the Covid crisis, where on the one hand they are recklessly bowing to big business pressure to allow unsafe workplaces to operate but in an effort to be seen to do something about the increase in cases have announced very unpopular unwarranted restrictions in outdoor activities, can lay the basis for fuelling further Trumpian-style protests initiated by the right-populist individuals and groups.

While concerning, it remains the case that these forces are way out of step with where most working-class people are at, as was evidenced by the derisory votes they obtained in the general election. Unvarnished racism and fascism has a very limited purchase. However it has been incorporated into the platform of some TDs who were returned to the Dáil including Noel Grealish (who ironically was at the Golf outing in Clifden) and Verona Murphy.

What is needed is a principled response by the left and trade union movement to the government’s mishandling of the Covid crisis — one that is firmly rooted in science but also an understanding that it is the nature of this government to compromise with the employers lobby to allow business to resume with the least amount of hindrances. A major battleground for combating Covid is the workplaces. The trade union movement has been deficient in its response.

If the unions were to mobilise thousands, with appropriate social distancing precautions, on the basis of the policies needed to combat the virus — enforcing safe work practices and protecting incomes in opposition to this government’s approach — it would demonstrably marginalise the bogus opposition of the reactionaries and possibly peel away some of the misguided individuals who have turned up to last Saturday’s protest. If such a protest was headed by healthcare workers it could gain massive support.

While ethno-nationalism and racism were not foregrounded by these reactionaries on Saturday, it is core to their agenda. The massive turnout of the Black Lives Matters protests across the country in the wake of the George Floyd killing dwarfed anything that the fascists have been able to turn out. This shows that young anti-racist people, combined with a mobilised workers’ movement and the genuine socialist left, the forces exist in society to challenge an emerging fascist threat if organised.