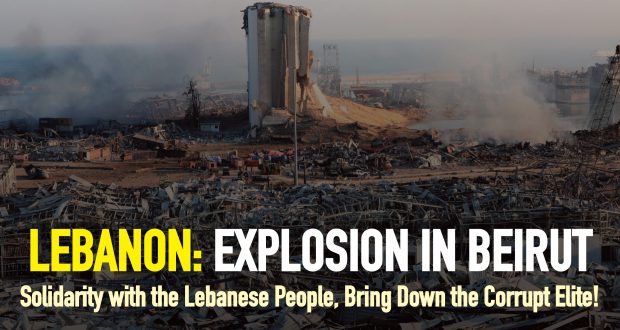 The huge explosion that occurred yesterday evening in the Lebanese capital, Beirut, in the heart of the commercial port, has shocked many people the world over. It resulted in a large number of victims. Extensive solidarity was displayed on social media from various parts of the world, especially after photos and figures published by the media outlined the scale of the devastation, the hundreds of victims, the thousands of wounded and the immense material damages, including the total collapse of many housing, administrative and commercial buildings. Over 300,000 people have been made homeless by the blast.

While the exact reasons for the explosion are still unclear, the fact that nearly 3,000 tonnes of deadly ammonium nitrate were stored unsafely in a port hangar for six years despite the immense dangers it posed to the population of Beirut is symptomatic of how rotten, corrupt and dysfunctional the Lebanese state has become. It also shows how necessary and legitimate is the revolutionary struggle initiated last October by the country’s youth and workers.

The events around this tragic explosion are indeed taking place in exceptional circumstances, as Lebanon has been experiencing a mass social movement since last October. This movement has been demanding an end to the ruling system that has nurtured corruption, sectarianism, widening poverty and indebtedness, enriching a handful of political thieves and bankers while bringing the country to bankruptcy.

A few months ago, the Lebanese government declared its inability to pay its debts and embarked on a new round of austerity policies. The Lebanese ruling elite has tried to bring the resolve of the Lebanese people to its knees by means of repression and by stirring up more sectarian strife. This comes on top of the large spread of the Coronavirus, which in turn has dramatically worsened the country’s economic crisis.

Standing alongside the Lebanese people in this new ordeal, and expressing our international support and solidarity, has become an urgent necessity. The port of Beirut, which represents 70% of the country’s trade, has been completely destroyed. This includes the grain silos, which exposes the country to a serious food crisis. The shortages and high prices of essential medicines, foodstuffs and other products of basic necessity, as well as regular power and water shortages, were already serious problems for Lebanon’s poor, working class and, increasingly, middle class people before this tragedy. They will be made incomparably worse after it.

Several hospitals were destroyed due to the explosion and others had their electricity cut off, along with large parts of the city, which forced them to treat the wounded in the streets and with rudimentary means. Many of the wounded in resuscitation units died due to the interruption of electricity. Many urgent operations are now carried out in the streets with electric generators.

Tayaar al’Amael al’Qaaedi (Tunisian section of the ISA) affirms its absolute solidarity with the Lebanese people in their plight, and its unconditional support for their living revolutionary struggle. We Say

It’s not a conspiracy, it’s capitalism!