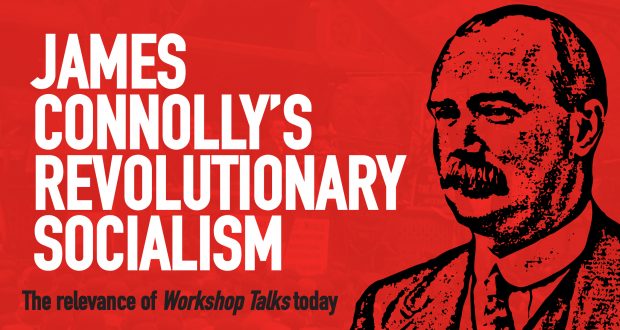 The relevance of Workshop Talks today

By Kevin Henry and Eddie McCabe

We live in turbulent times; just seven months into a new decade and it has been totally dominated by crises, especially in the form of the pandemic and the economic crisis it has detonated.

On top of this, 2020 has also witnessed environmental events that reinforce the urgency of the ecological crisis we face, from the massive bushfires in Australia to Arctic temperatures reaching 37 degrees C. The spectre of war looms ominously, from the new Cold War between the US and China; the escalating tensions between the US and Iran; to the ongoing attempts by the Israeli government to annex a large section of the West Bank in Palestine; or the terror inflicted on the people of Yemen.

It has also been a year of historic resistance, epitomised by the Black Lives Matter uprising in the US and around the globe.

These events are not just coincidental or isolated, they are parts of a totality of capitalist chaos. The system is malfunctioning with dire consequences for billions of people, who will inevitably search and strive for an alternative to the system. Socialism is reviving as a political idea and it’s finding a receptive audience particularly among the young generation whose formative years have known only political instability and capitalism in crisis.

Given this renewed interest in socialist ideas, it’s worth returning to one of the socialist movement’s most prolific exponents, James Connolly, who was immersed in the workers’ struggles of his day challenging sectarianism, racism and sexism while advocating for revolutionary change. Workshop Talks, or Socialism Made Easy by Connolly is a great place to start for a primer on socialism. Although it’s over 110 years old, its arguments retain all of their validity and sharpness. The pamphlet stands out for its accessible, witty and no nonsense style, which made it hugely popular at the time among workers in the US, Canada, Australia, Britain and Ireland.

Written during one of his periods as an organiser and agitator in the US (with the Industrial Workers of the World, or Wobblies), this short pamphlet sought to answer many of the basic questions ordinary workers had, and replied to the lies against the socialist movement prevalent at that time. Connolly had a reputation in the US for challenging sterile and dogmatic ideas. In this pamphlet he turned his pen to another mistaken idea, which at that time was gaining support; the notion that the capitalist system could simply be reformed away.

Axe to the root

Some versions of the pamphlet have been printed with the title “The Axe to The Root”. This evokes a central idea that Connolly pushes in this pamphlet and his other works; namely that while there are many good people trying to deal with real problems in our society, such as poverty, disease and homelessness, through charity, Connolly makes the point that while such efforts are noble, they are unfortunately incapable of ever solving these problems – which are systemic under capitalism. To really deal with them, it’s necessary to get to the roots of the problems, which all stem from the capitalist market system and the private ownership of society’s resources, wealth and industry.

To slightly divert from Socialism Made Easy, this is an important theme found throughout Connolly’s writings, which has particular relevance in the context of the coronavirus pandemic. In his 1915 book, The Reconquest of Ireland, Connolly speaks about how tuberculosis spread among the poorest, particularly the Belfast female mill workers, ‘the millies’, who lived and worked in crowded and damp conditions. He commented:

“We do not deny the benevolent motives of the good ladies and gentlemen at present crusading against consumption in Ireland, but we consider that the agitator who aroused the people to revolt against the conditions of toil and life for the workers is doing more to end the scourge than all the anti-tuberculosis societies ever dreamed of.”

Anyone who sees the struggle of essential workers for PPE or the aggressive drive to reopen our economy without due regard for safety can be of no doubt of the relevance of this for today. In the North, a recent report has looked at the disparities in cases and drew the conclusion that: “The geographical distribution of Covid-19 deaths in Northern Ireland is further evidence that the burden of this infection is falling disproportionately on those most deprived.”

Claims at the beginning of the pandemic that the virus was an equal opportunity killer have been proven bogus. The virus is a bigger threat the poorer one’s community, country or region is. Millionaires don’t have to work on the frontlines, rely on overstretched and underfunded public healthcare systems, or even stray too far from their mansions or yachts. It is a damning fact that in the months since the pandemic began, the billionaires in the US have increased their wealth by a combined by $565 billion (by July 2020), while unemployment is at an all time high and food banks experience a 70% increase in people seeking their help. This obscenity would undoubtedly outrage someone like Connolly, but would not surprise him – understanding as he did the workings of capitalism. For this reason, he was a revolutionary, not a reformer.

The pamphlet starts with Connolly poking fun at the fact that in “In Ireland Socialism is an English importation, in England they are convinced it was made in Germany, in Germany it is a scheme of traitors in alliance with the French to disrupt the Empire”. Today we hear echoes of the same rhetoric against socialist ideas, with Donald Trump in his 4th of July speech raging against Marxism and “International Socialism.” In Hong Kong, the Chinese dictatorship is using the excuse that activists may be influenced by “foreign forces” to implement serious attacks on democratic rights, which will be used not just against those found to be funded by foriegn powers, but those that seek to organise the workers’ movement across borders, such as International Socialist Alternative (ISA) to which the Socialist Party is affiliated. Both the Chinese and US capitalist establishments are clearly prepared to use nationalist ideas against their political opponents, most importantly the socialist movement.

However, Connolly states that ‘‘all nations today repudiate Socialism, yet Socialist ideas are conquering all nations”. Connolly was living at a time when the socialist movement was making massive strides forward, including with the development of mass parties which at least nominally stood for socialist change. In Germany, the Social Democratic Party (SPD) had a mass base among workers, despite a history of political repression against socialists, and two years after this pamphlet was written it won 35% of the vote in the national election despite a restrictive franchise. Similar surges for socialist and labour parties took place in most European countries at this time. Connolly experienced the growth of the socialist movement in the US,