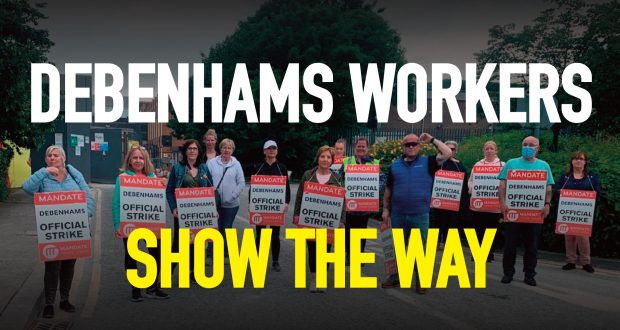 Getting anything above the bare statutory redundancy after, in many cases, decades of service depends largely on the workers getting an advance commitment from the liquidator KPMG that the workers will get a proper share of the proceeds of the tens of millions of euro of stock to be sold off as part of the liquidation process.

Without such a commitment from the liquidator the workers have been rightly blocking the removal of stock with pickets and night watches. So solid have these blockades been the workers correctly anticipated the possibility of injunctions being taken out against them by the liquidator but so far this has not happened with the liquidator likely correctly calculating that such a move would be deeply unpopular and likely boost the active support for the workers.

There are at best hints from the government and MANDATE union officials of behind the scenes communications with the liquidator to secure a settlement but nothing concrete. That things have been even pushed this far is a testament to the determination of the workers. It must be said here that any negotiations that do take place must have the direct participation of Debenhams’ shop stewards.

Laws for the rich

The laws as they stand give preferential treatment to the Revenue and business creditors ahead of the workers in liquidation situations. The authorities in this country also permit companies like Debenhams to play games such as bogusly claiming that the stock belongs to the UK parent company and that online sales in Ireland are likewise accrued to the UK parent and not the Irish subsidiary i.e. beyond the reach of the workers. The UK parent has also scandalously claimed that the Irish subsidiary is co-guarantor for an unpaid £200 million loan the UK parent company took out!

So what the Debenhams workers are fighting for is not just a fair settlement for themselves but for new rights to be won for all workers in this type of situation. We were promised after the Clerys’ saga five years ago which shared many similar features to the Debenhams struggle that the laws would be changed. The new programme for government makes a vague promise on this as a result of pressure from the Debenhams workers’ struggle.

However the best guarantee of achieving both a decent settlement for the Debenhams workers and lasting changes that would benefit thousands of other workers into the future is to support the struggle that is being waged by those workers now.

Solidarity TD and Socialist Party member Mick Barry, former TD Ruth Coppinger and party activists have actively supported the workers from the beginning both in the Dáil but most importantly assisting with protest actions to help sustain the struggle through the lockdown months.
We firmly believe that far more could have been done by the official trade union movement to champion the Debenhams struggle. The initiative for today’s protest has come from the workers and activists who support them but MANDATE should have officially backed it, circulating all their members and ICTU likewise circulate all their affiliates to turn out in force.

If the government were prepared to give in on wage subsidies, enhanced welfare payments, rent freezes etc as the lockdown begun a strong public call by the MANDATE leadership and the ICTU for a suspension of liquidations for the duration of the lockdown along with demands to save jobs in retail including by nationalising major jobs shedding firms could have wrung concessions from the government on this score.

Employers in this country are not letting the Covid crisis go to waste and there is already an avalanche of closures and redundancies as well as attacks on pay and conditions on those remaining in work from aviation to construction. In retail alone 100,000 jobs are predicted to go and official estimates are that there will be 400,000 unemployed by the end of the year. The Debenhams workers have shown that these attacks from employers do not have to be meekly accepted.