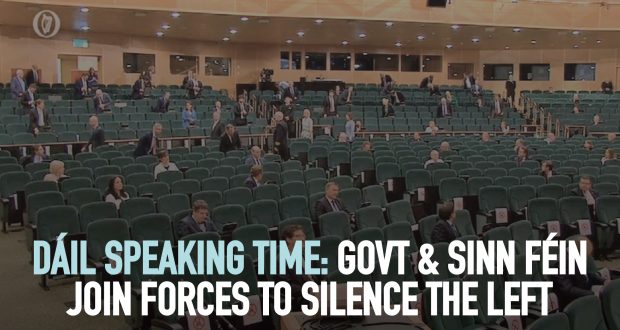 The government and Sinn Féin have passed new Dáil speaking rules to reduce the impact of smaller left parties and groups.

In over 100 years of the Dáil all parties spoke once in the first round of speakers with the allocation in subsequent rounds making speaking time proportional. The government and Sinn Féin have come together to dispense with the established practice, aware lthat eft and socialist voices are a major threat to them in the coming years. Instead of speaking 5th in debates, the Solidarity/PBP group will be pushed back to 12th place.

In the past weeks it has been Mick Barry TD and other left-wing TDs who have held the government to account on junior ministerial pay rises, the attempt to penalise those made unemployed by Covid-19, and the lack of support for the Debenhams workers. Mick has also been to the fore in pressing for a solution for Leaving Cert students’ exams.

Socialists are the most effective voice of opposition in the Dáil. This was seen when Joe Higgins held the capitalist establishment to account over banking practices and on workers’ rights such as the GAMA workers. Ruth Coppinger brought the voice of young people and women into the chamber in demanding repeal of the 8th Amendment and an end to victim blaming in courts.

Sinn Féin are laying the ground for future coalition with Fine Gael and Fianna Fáil. They supported the speaking time changes as they are aware that on issues such as water charges they were widely seen as conservative and out of touch in comparison to the Socialist Party’s call for non-payment and building an active movement. On abortion rights Sinn Féin were not pro-choice and were far behind voices such as Ruth Coppinger. In the coming years as major issues and campaigns emerge, they wish to have left and socialist voices diminished.

Regardless of speaking time arrangements in the Dáil, the Socialist Party and our TD Mick Barry will continue to fight to build opposition to the government’s right-wing policies inside and outside the Dáil chamber.