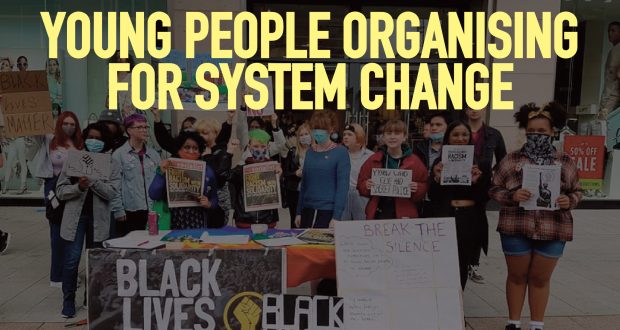 Contrary to the period of stillness and silent obedience the establishment would have desired quarantine to be, the last few months have seen explosions of struggle, demonstrating the deep-seated and determined will of working-class people to see change in society. From the burgeoning Black Lives Matter movement in the US and internationally, to the Debenhams strikes in Ireland, the pandemic has exposed a system built off of inequality and injustice.

This inequality is encapsulated by the fact that US billionaires have seen their wealth surge by $637 billion since the beginning of the pandemic, whilst over 40 million Americans have filed for unemployment in this time. Capitalism invariably allows the super-rich to profit off of a pandemic that is robbing working-class and poor communities of their livelihoods.

This wealth disparity is not isolated to the US; capitalism scourges the working-class globally without prejudice. In Ireland, Covid-19 has seen thousands of layoffs in the meat industry alone at the hands of billionaires like Larry Goodman. Instead of properly nationalising essential industries and providing adequate PPE for its workers, the Irish government would rather obsequiously hand over €13 billion to Apple and give their junior ministers a hefty pay rise. All whilst lauding frontline workers for their daily sacrifice.

Exposed to these inequalities on the daily, millions have taken to the streets in contempt of a system that will always have the odds stacked against them. Rallied awake by the brutal state murder of George Floyd, young and working-class people around the globe have taken a stand against the racism that stems from the heart of capitalism. This time with a sharper understanding of the need to fight against a system that thrives off of the division of the working-class, a generation of young people have begun to pose a real threat to the racist establishment.

Their cries are not ones of compromise, calling for the barest, most minimal concessions, but demands for real change. They envision a society that doesn’t subject anyone to oppression or discrimination, a society that is only possible through socialist politics and a system that prioritises its people over its profits.

When organised, we have witnessed the power of protest and strike. The victories of Marriage Equality and Repeal in the South were only won because of the insurmountable threat an organised force of largely young and working-class women and LGBTQ+ people posed to a barbaric establishment. Similarly, the angered refusal of parents, teachers and students to sit a life-altering and incredibly stressful terminal exam in the middle of a global pandemic is what forced the cancellation of the Leaving Certificate earlier this year.

Reflecting on these gains, a clear lesson we can draw from Covid-19 is the urgent need to get organised. We cannot end oppression in any of its forms without attacking the system that perpetrates it – capitalism. Young and working-class people must organise around socialist politics in order to effectively fight racism and the housing crisis, fully nationalise our health system with a demand of full provisions for its trans patients, and end the climate crisis.