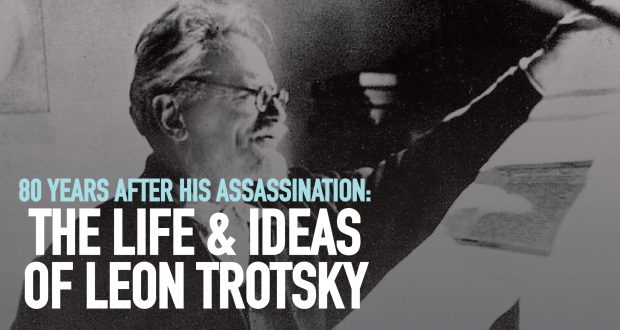 80 years after his assassination: The life & ideas of Leon Trotsky

This year, 21st August marks the 80th anniversary of the death of Leon Trotsky in Mexico following an assault at the hands of a Stalinist agent. Alongside Lenin, Trotsky was the central Bolshevik leader of the October revolution in Russia which created the world’s first workers’ state. He would wage a lifelong struggle against both capitalism and Stalinist dictatorship.

In 1905, when the Russian workers first rose en masse against Tsarist autocracy, Trotsky was elected chairperson of the Petrograd soviet (workers’ council) at the age of just 26. The revolution was ultimately defeated and Trotsky was forced into exile. However, it was an important learning experience for both the Russian workers and Trotsky himself.

He concluded that, unlike in the advanced countries, the capitalists in Russia and other underdeveloped countries were incapable of leading a movement to overthrow feudal absolutism. Instead, this task would fall to the working class who would then proceed to lay the basis for the socialist transformation of society. This became known as the theory of permanent revolution.

In the February revolution of 1917, the Russian workers overthrew Tsar Nicholas II and demanded an end to the war, poverty and landlordism. However, state power was initially claimed by the unelected and pro-capitalist Provisional Government. Upon their return to Petrograd from exile, both Trotsky and Lenin – in opposition to the local Bolshevik leadership, including Stalin – argued that the Provisional Government would fail to deliver on the aims of the revolution and that the working class must prepare to take power through the soviets.

The October revolution bore out this perspective, with Trotsky heading the Military Revolutionary Committee. He would go on to lead the Red Army, which successfully defended the nascent workers’ state against White counter-revolutionaries and twenty-one foreign armies who would attempt to crush the Soviet government in its infancy.

Lenin and Trotsky always said that a healthy workers’ government could only survive in Russia if the revolution spread to the more developed economies of Europe. In the wake of the October revolution, there were revolutionary upheavals across the continent, but they were betrayed by the pro-capitalist leaderships of the workers’ parties. Isolated in the conditions of backward and war-torn Russia, a parasitic bureaucracy began to develop around Stalin.

In 1922, Lenin and Trotsky formed a bloc against the rising bureaucracy, calling for the strengthening of democratic control, the elimination of privileges and other measures. Trotsky continued this fight after Lenin’s death, forming the Left Opposition. However, given the continued isolation of the revolution – due in part to the policies of the Stalin clique – the bureaucratic degeneration of the Soviet Union deepened and Trotsky was ultimately forced into exile in 1928 on trumped up charges. Stalin would have preferred to have Trotsky executed, but feared reprisals.

Trotsky would continue to rigorously defend the gains of the October revolution – chiefly the abolition of capitalism and the creation of a planned economy – while building support for a political revolution to overthrow the Stalinist bureaucracy and reinstitute workers’ democracy. He founded the International Left Opposition and later the Fourth International to defend the ideas of genuine Marxism and to give them an organisational form.

The Stalinists carried out ruthless purges in the Soviet Union to consolidate their power, leading to possibly over a million deaths. In the show trials, Trotsky was always the key defendant in absentia, subjected to preposterous slander. Even in exile, Stalin saw Trotsky and his ideas as the prime threat to his power. Many of Trotsky’s family were murdered by the Stalinists, before he was finally assassinated in 1940.

Despite this persecution and suffering, Trotsky was unwavering in his ideas and his hope for the future. Six months before his death, he wrote, “My faith in the communist future of mankind is not less ardent; indeed it is firmer today than it was in my youth… Life is beautiful. Let the future generations cleanse it of all evil, oppression and violence, and enjoy it to the full.”

A new generation internationally is looking towards socialism as an alternative to the misery and destruction which capitalism offers. We can draw inspiration from Trotsky’s life but, most importantly, his ideas offer a vital and practical guide for the struggle for a socialist future worthy of the name.