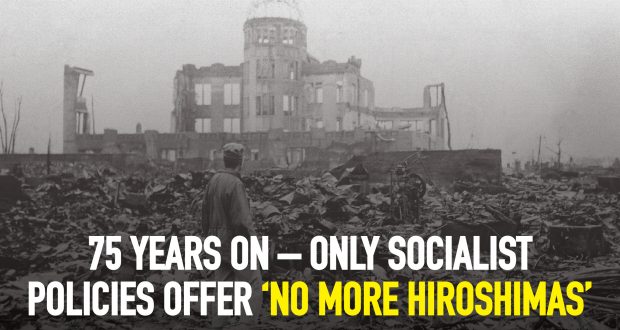 On 6 August 1945 the world first witnessed the horrific power of the atomic bomb. The bombings of Hiroshima, and Nagasaki only days later, are today still the only examples of nuclear weapons having been deployed against a population.

The death toll immediately after the blast in Hiroshima was 75,000 people; yet by December this number had risen to around 140,000. After the Nagasaki bombing, the total death toll was well over 200,000. And for many more years to come, those not killed immediately would continue to suffer the awful effects of radiation poisoning, whether they were the Hibakusha (atomic bomb survivors) or the children of people there.

The word ‘Hiroshima’ today still conjures up powerful images of the mushroom cloud, or the scale of the devastation. The ruined shell of the Hiroshima Prefectural Industrial Promotion Hall, now known as the ‘A-Bomb Dome’, is a stark visual example of what happened 75 years ago.

There are plenty of accounts from survivors and witnesses of the horrors of the bomb, describing the carnage from the impact of the blast, the way people’s eyes and skin melted and burned, and the way that objects disintegrated in the intense heat left a ‘shadow’ burnt into the ground where it was.

Then there was the radioactive ‘black rain’ which fell across the area, leaving victims with extremely severe radiation sickness. Hair would fall out, people would become feverish, and if they did not die quickly, would develop cancer or leukaemia. After the bombing, it was said nothing would ever grow again in the area.

The bombings of Hiroshima and Nagasaki, we are often told, brought an end to the war and spared the Allied forces the need to launch an invasion of the Japanese islands. Yet even high-ranking American military officers denied using the bomb was necessary. For example, Fleet Admiral Chester Nimitz, Commander in Chief of the Pacific Fleet, stated only two months after the bombing of Hiroshima that “the atomic bomb played no decisive part, from a purely military standpoint, in the defeat of Japan…”

The tensions with the Soviet Union that would lead to the Cold War, had already begun; dropping the atomic bombs on Japan was not a military tactic, but a political one. President Truman needed to show Stalin that the US military had already successfully developed an atomic bomb, to limit Soviet expansion into Asia.

Yet although atomic weapons were not used, indiscriminate bombing raids were one of the most appalling military strategies of the Second World War, and one under which the Japanese civilian population would suffer heavily.

What should also not be forgotten is the racist, anti-Japanese propagandapromoted by the American ruling elite during their fight against Japan, as well as the forced internment of around 120,000 Japanese-Americans. One particularly appalling example of such propaganda showed the Japanese people represented as lice, named ‘Louseous Japanicas”, with the caption: “Flame throwers, mortars, grenades and bayonets have proven to be an effective remedy. But, before a complete cure may be effected, the origin of the plague, the breeding grounds around the Tokyo area, must be completely annihilated.“

This piece of propaganda appeared in a magazine in March 1945, when the US military began incendiary bombing raids on Japanese cities. From November until the end of the war, Tokyo alone was bombed over 100 times, with the worst air raid happening on 10 March 1945. “More people were killed in the indiscriminate bombing of 10 March than in the immediate aftermath of the dropping of the atomic bomb on Hiroshima.“

This is not to cast the Japanese ruling elite at the time as innocent in any way. Fighting an imperialist campaign to establish an empire across Asia, Japan’s ruling class were responsible for atrocities such as the Nanjing Massacre, the abusive treatment of prisoners of war, the use of Chinese and Korean slave labour, and forcing women to serve as sex slaves for the Japanese army.

There is also the issue of how the militarist regime in Japan treated ordinary Japanese people during the war. Towards the end of the war, young men (often students drafted into the army) were coerced into carrying out suicidal kamikaze attacks, using either planes or the ‘human torpedo’ submarines. But the aggressive wartime regime also brought in the Air Defence Act in March 1937, giving the state legal powers to actually prevent civilians from seeking shelter during air raids. Instead, civilians were forced, under the threat of criminal action, to help put out any fires in the area.

Massive numbers of Korean workers were also conscripted to wartime labour in Japan, with Hiroshima and Nagasaki being two key industrial cities. Anestimated 50,000 Koreans died immediately after the bombing, yet the Japanese state (absolved of any formal responsibility for helping the Hibakusha under the 1951 San Francisco Peace Treaty) dragged its heels over compensation to Korean Hibakusha. It was only in 1991 that $25 million was allocated for them.

Anti-war and pacifist sentiments are today key elements of the Japanese working class. The nationwide anti-nuclear weapons movement has popularised the slogan of “No More Hiroshimas!”, while attempts by Prime Minister Shinzo Abe to alter the constitution and essentially scrap Article 9 have met with massive resistance and protests. Article 9 is the so-called ‘pacifist clause’ of Japan’s postwar constitution, which renounces the maintenance and use of a standing army. Although a standing army (the Japan Self-Defence Force) was established, under the auspices of the USA, they are strictly confined to a logistical role, even when deployed on UN ‘peacekeeping’ operations such as in Sudan.

In the early 1950s, a huge mass movement involving students and workers erupted across Japan when the then Prime Minister Nobusuke Kishi tried to undemocratically ram through a revision to the US-Japan Security Treaty. This mass struggle (known as the ANPO movement) fought against treaty revisions that would mean US forces could be stationed in Japan; and while it ultimately failed to stop Kishi from getting it through parliament, it was a testament to the potential of the Japanese working class to rally to a cause and fight a sustained battle.

In more recent protests against Abe’s attempts at constitutional revision, some of the signs and slogans have been against the potential for the JSDF to carry out an active combat role.

The legacy not just of Hiroshima and Nagasaki, but of the entire war in Asia, is keenly felt today. US military forces still occupy the majority of Okinawa, whose people also suffered brutally at the hands of the Japanese army. The massive anti-nuclear sentiment stemming from the bombing, the “nuclear allergy”, was initially an obstacle to setting up nuclear power plants in Japan; with the Fukushima disaster of 2011, this has now become a hugely important issue for layers of the Japanese working class.

The question of nuclear power – whether for military or peaceful use – is above all a question of who controls the technology, and to what end. Socialists fight for a world without imperialist wars over resources, carrying the ever-present threat of nuclear weapons being used which are far greater than the ones used 75 years ago.

Members of the capitalist class and the ruling elites will pay lip service to the idea of a ‘nuke-free world’. But this is rank hypocrisy, as the USA, Russia, China, India, Pakistan, Israel, North Korea and the UK are among those nations who hold their share of the world’s 13,400 nuclear warheads.

The massive funding into military nuclear power must stop, with the money instead used to fund and massively improve vital services and research for health and sustainable, renewable energy sources.

But we shouldn’t stop there. We fight for a socialist society, one in which all industry and the entire economy is placed under the democratic control and management of working-class people.

Some useful books written about the bombing:

Children of the Ashes (Robert Jungk)