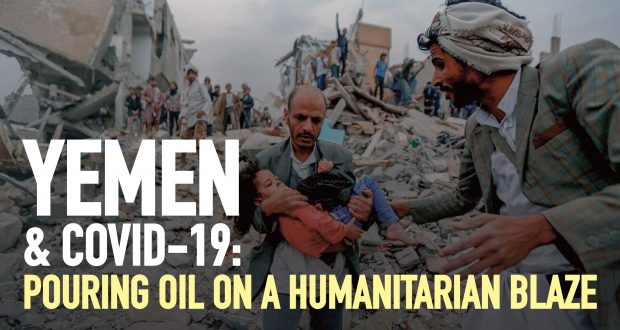 Amidst a drawn-out civil war with ongoing violence, Covid-19 has inflamed the “world’s worst humanitarian crisis” taking place in Yemen. Even before the country’s first confirmed case in April, half of Yemen’s population of 28.5 million people were on the brink of famine, largely caused by the bloodthirsty Saudi Arabian regime’s indiscriminate bombing of farms and food supplies.

On the verge of disaster

Today, 2.4 million – one in two – Yemeni children under the age of five years old suffer malnutrition. It is further projected that up to 30,000 children will develop severe, life-threatening malnourishment in the next six months, 6,600 of whom are expected to die from starvation or preventable diseases in this time, according to UNICEF.

The complete lack of effective public health and water systems in Yemen exacerbates this crisis. Almost half of the country’s health facilities were not operating before the pandemic, but any semblance of public health provisions have near-collapsed under Covid-19, with only 710 ICU beds in the whole country! Misinformation is rampant, and a general distrust in the state amongst Yemeni people prevents the sick and infected from accessing the limited care available to them in hospitals, which are perceived to be hubs of disease.

There are currently 1,128 confirmed cases of Covid-19 in Yemen, although the absence of testing facilities suggests that the actual figure is much higher, especially as 304 people – 27% of those infected – have died as a result of the virus (John Hopkins University).

The inability of the Yemeni healthcare system to deal with the pandemic has driven almost 85% of its population to rely on humanitarian aid, which is incapable of providing the necessary relief to the millions of Yemeni people affected by starvation, poverty and disease. The current situation in Yemen is a horrifying exposure of the brutality and inhumanity of capitalism today.