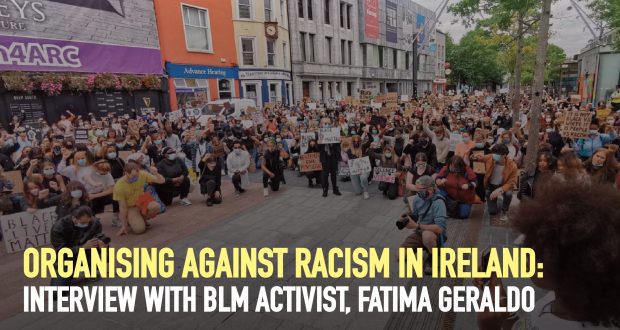 The mass movement that was sparked by the brutal and racist murder of George Floyd received an echo across this island. From Belfast to Dingle, people marched and spoke out about the racism that black people and people of colour face in Ireland today. Socialist Party member Shane Finnan spoke to Fatima Geraldo, an organiser of recent protests in Cork.

So, Fatima, can you tell me a bit about yourself?

“Hi, my name is Fatima Geraldo. I’m eighteen years old and originally, I’m from Angola, but I moved to Ireland when I was seven.”

Regarding the issue of racism; when would you have first been conscious about racism? Was it when you came to Ireland first?

“I suppose so. When I lived in Angola there were white people there. I didn’t feel that I was any different to them. But I would say that it’s not something you recognise straight-off. It’s something that takes time for you to realise that other people are treated differently. Like for me, I suppose I recognised it when I saw my other friends being treated differently. You know like people who were born in Ireland and they are black. I was too focused on learning English and I couldn’t concentrate on the difference that was going on; I was more focused on myself than what was going on around me, if that makes sense?”

Would you have observed racism in school?

“Yeah in school I noticed teachers treating young black Irish people differently. I suppose they treated me and my siblings better because I was new to Ireland. Seeing other friends being treated differently was my first experience seeing racism. I first experienced it myself when I got to secondary school.”

In recent months you would have played a role in organising the Black Lives Matter protest in Cork. Can you explain to me how the protest in Cork took shape?

“Basically, after George Floyd’s killing a lot of people felt frustrated and angry. None of us really knew how to express how we felt. Lots of people wanted to do something in Cork City and all over Ireland as well. A lot of people were getting in contact with each other and wanted to know what everybody wanted to do about this whole thing. One of our friends decided that they were going to start a protest in Cork city and my twin sister Ilda wanted to start a protest as well. So, they started organising the protest just the two of them, and I think that’s when they got in contact with James (Socialist Party member) and everyone else to help them organise it and that was really successful.

Another group of people called a protest after that, and they invited me and Ilda because they saw how good the turn-out for the other protest originally was. They wanted to hear us speak. They helped organise the whole thing. They wanted black voices to be heard so they kind of let us take charge because they wanted inclusivity. They indicated that it wasn’t their voices (they wanted heard) but they wanted to stand in solidarity. It wasn’t about the spotlight for them; they wanted the spotlight for black people and people of colour to speak so that was pretty amazing. Now, I don’t know if you know this, but there’s another protest going on this Saturday. This will be the third one in Cork City. That’s pretty cool.”

Yeah, that’s really cool. Do you think that there’s been a big change in Cork or in Ireland since the murder of George Floyd? Do you think that white Irish people’s consciousness about racism has changed, and what impact have the protests had?

“Definitely. 100%. I just feel that most people didn’t think that racism occurred in Ireland, or that they turned a blind eye to it because they didn’t feel like it was their place to get involved. But now hearing everyone’s stories like, people they know, people that are close to them. I think for them it has been really eye opening because I had friends texting me being like ‘I’m so sorry. I didn’t understand back then, I didn’t see what you were going through – because I never experienced something like that.’

Like, the global-warming protests. You know, I’m sure that many of us weren’t aware the scale of it until people started raising awareness and then we became more educated. That’s the same with the Black Lives Matter movement. A lot of people weren’t aware of how big of a problem racism was in Ireland until the protests started happening, until they saw how many people were showing up for this protest movement. Then people were like ‘Yeah this isn’t just an American thing’. Protesting definitely does have a huge impact on people.

What other sort of actions can educate people as well as protest?

“I suppose educating people about African history. I took history for the Leaving Cert and throughout my six years of secondary school, I’d say the only type of Black history that I learned about in school was the Civil Rights movement in the U.S. Even that was only a little piece of it. Everything else is mostly white history – or Irish/British history. I think we need to incorporate People of Colour’s history, even Black history, something from Asia – stuff like that. Obviously, that will make the curriculum a bit bigger and I do see the challenges. But even in primary school, like history isn’t a major subject like it is in secondary school. Even if we were to educate kids little by little as they grow up that would impact kids in so many ways. Kids are very aware of things that we might think they are not aware of. If you speak with kids, you’ll find that they are fully aware with what is going on. All-inclusive history is needed, not just one-sided history. “

That makes complete sense. Okay, those were the majority of questions I was going to ask you. If there’s anything else that you’d like to say – any closing statements, feel free to say whatever you want to say.

“I suppose a closing statement would just be a major thank you to everyone supporting the movement. A big shout-out to Socialist Party members in Cork for being such a great inspiration for people to follow just by getting people involved, with the meetings that the Socialist Party holds, getting the information out there to people is really great to see, you know. Even though social media may have got quieter it’s good to see some people are still fighting for the cause regardless. It’s really meant a lot so I just want to say a big thank you to everyone.”