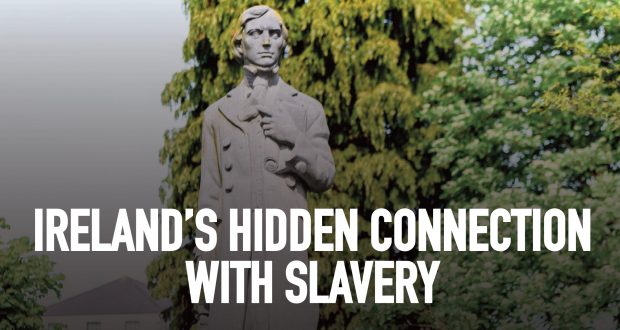 The establishment in Ireland, North and South, like to put forward a sanitised version of their record on racism, both today and historically. It is suggested that the Irish ruling class never benefited from slavery, unlike those based in British port cities like Liverpool and Bristol. This is simply untrue.

In 1833, after slavery was abolished across the British empire, the government compensated the slave-owners and not the slaves, transferring huge sums of money to already wealthy people. A compensation fund of £20 million was set aside for slave-owners, estimated to be the equivalent of 40% of the national budget.

One hundred and eighty people in Ireland were ‘compensated’, including the La Touche family of bankers and property developers in Dublin. Two members of that family received almost £7,000 (the equivalent of €1.1 million today) in compensation for the 385 slaves they had in Jamaica. The La Touche House office building in Dublin’s financial centre was named after these fine examples of heartless capitalism.

The College Green gate entrance to Trinity College is one of Dublin’s best-known images. Few know it was built in the early 17th century with money from tobacco, a slave crop. Larne Town Hall is also named after a famous slave owner.

People from both sides of the sectarian divide in the North became involved in the slave trade when they emigrated to north America. Andrew Jackson is commemorated at his ancestral house outside Carrickfergus. Born of poor County Antrim parents, he went on to become US President. Records show he beat his slaves, including doling out a brutal public whipping to a woman he felt had been “putting on airs.” Is it really surprising that he is admired by Trump, who was the first sitting President to visit Jackson’s grave?

A hero of Irish nationalism, John Mitchel was a leader of the Young Ireland movement in the mid-19th century. He was jailed but escaped to America. Once there, he became a newspaper editor and a slavery advocate, describing black people as “innately inferior”. During the Civil War, he supported the Confederates. Due to his role in campaigning for Irish independence, at least ten GAA clubs are named after him, and there is a statue of him in Newry.

As with the statue of Edward Colston, which was dumped in Bristol harbour by BLM protesters, socialists support the removal or renaming of monuments to those who profited from and defended slavery, a horrific example of capitalist barbarism. This does not represent an erasure of history. It is a recognition of the crimes of the past. Ending the valorisation of those who engaged in slavery sends a message about the society we wish to live in today.