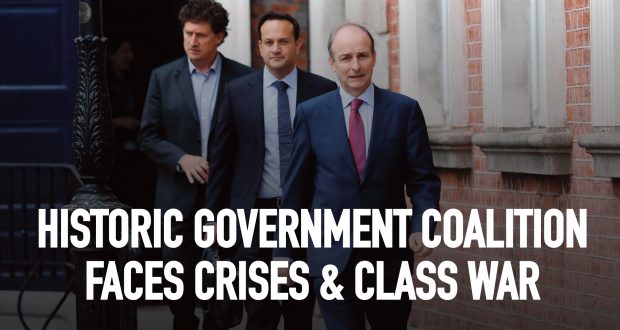 “The country was very united during the pandemic. The economic crisis that is coming could be very divisive” – Leo Varadkar June 30.

140 days after the General Election a new government was formed in the Republic of Ireland on 27 June. The Government is made up of the two traditional right-wing parties Fianna Fáil (FF) and Fine Gael (FG), with the Green Party also part of the coalition.

This is a significant historic development in Irish politics. FF and FG trace their origins to the civil war divisions that accompanied the founding of the State. These two parties have dominated politics in Ireland since that time – leading both the government and opposition in every Dáil, while both fundamentally serving the interests of the conservative capitalist establishment. That cynical but useful arrangement is over now, and is a blow to that same establishment.

The General Election reduced FF and FG to an all-time combined low of 43% as voters expressed dissatisfaction with a joyless recovery, demanded real change and surged to Sinn Fein and a variety of parties perceived as anti-establishment. The decision of the Green Party to enter government with FF and FG represents a certain betrayal of the vote for change and will serve to burn bridges between the Green Party and a significant portion of their voters, especially younger voters.

FF and FG are the parties of big business, the landlords, the big farmers and the rich. They are sturdy defenders of the status quo and stand in the way of progressive change that benefits working people and the young. The previous Government, led by FG and propped up from the outside by FF, presided over a massive housing crisis, a crisis in health and widening inequality.

Just under a quarter of Green Party members voted against going into government.

This was fewer than many commentators expected and, in part, represented the marginalization of opposition by the party machine. Elements within the 24% who voted No and who are serious about organising opposition to a government dominated by FF and FG need to now break from the Green Party and cooperate with the genuine Left.

The only measure worth talking about is its effectiveness in the face of the looming climate disaster and the benefits they bring to ordinary people. Despite providing €1 million a day for walkways and cycle paths; despite skewing transport spending to 2:1 in favour of public transport over roads; and despite plans for a 51% cut in carbon emissions by 2030; the PFG still falls far short on climate action.

Crucially, the 7% a year carbon emission reductions are to be measured over a decade rather than on a year by year basis. This has allowed FF and FG postpone the majority of the emissions cuts to the second half of the decade – a real red flag for many people who take the carbon emissions issue seriously. Rather bizarrely, the PFG distinguishes carbons emissions from “biogenic methane” emissions (from cows!), sidestepping the issue of reducing the national herd and protecting the interests of FF and FG supporters in big dairy.

Free public transport – now in place in 100+ cities worldwide – is not included in the “greenest PFG in the history of the State”. Nor is any measure which would really go after the big carbon polluters in industry and agriculture. Instead, a neoliberal carbon tax rising year on year between here and 2030 from €26 per tonne to €100 per tonne will penalize ordinary people and risk undermining public support for climate action.

The government has multiple pledges that it will avoid “austerity” by first borrowing and then increasing spending by the State. In part, this reflects a realization on their part that a 2008 / 9-style full frontal assault on the working class will go down like a lead balloon and could provoke an immediate confrontation between the classes.

It also reflects an understanding that Irish capitalism has been partially floored by the pandemic and that the State needs to be employed as an actor to get it back on its feet.

The multi-billion euro “July Stimulus” package being brought forward by Varadkar and the National Economic Plan being introduced alongside the October Budget will aim to do precisely this.

This is not the Keynesianism of post-World War Two Europe which ushered in the welfare states under pressure from the labour movement. The Keynesianism of the FF / FG / Green government will focus first and foremost on pumping billions of euro of State money into reviving the damaged private sector.

Even if the new Government seeks to avoid outright confrontation with the working class for now, the same approach may not be applied by their backers in the boardrooms of big business. Operating on the basis that you should “never waste a good crisis” many employers are using the cover provided by Covid-19 to drive through policies they have wanted to implement for years.

One such employer is Aer Lingus, where the vulture capitalist owners are trying to cut pay by 70%, make 500 workers redundant, and ban industrial action for 20 months. With the vast majority of flights grounded, workers have been limited in what they can do to fight back, but a 3-1 vote by FORSA trade union cabin crew to reject a similar package is a signal of intent, and workers may be in a stronger position to flex some industrial muscle if and when flights pick up further into the summer period.

Debenhams’ decision to shut its 11 Irish stores and to force 2,000 workers out of their jobs has met with a militant response. For three months now, Debenhams workers have combined both official and unofficial pickets, protests and blockades to demand State action to defend jobs, or at the very least, to secure a decent redundancy settlement.

Despite being in a challenging situation from the point of view of winning their demands, the Debenhams workers have put down a marker and provided a preview of the kind of action other workers can take as this crisis develops.

The most important issue facing Irish society is now the issue of jobs. Senior civil servants have told the Dail’s Covid-19 Committee that there will be 400,000 unemployed at Christmas (about one sixth of the workforce), even despite the July Stimulus and the National Economic Plan. The Government will risk a powerful backlash if they bow to pressure from officials in the Department of Finance and try to abolish or significantly cut back the €350 per week Pandemic Undmployment Payment at the end of August.

Young people can be an explosive factor in the developing situation. Less than one in seven young voters voted FF on 8 February and now the leader of that party, Micheál Martin, will act as Taoiseach for the next two and a half years. Having voted for change under the impact of the housing, mental health and climate crises in February, young people now have another powerful new reason to raise their voices – mass youth unemployment.

More than half of all young people aged 15-24 are currently unemployed. Mass emigration of the youth has traditionally acted as a vital safety valve for Irish capitalism.

This option is likely to be far less available in the next few years – and the lack of it could turn Irish society into a pressure cooker.

A period of capitalist crisis and class war

This government comes to power against the backdrop of a developing world economic recession which some say could rival the Great Depression of the 1930s. For a small, open economy such as Ireland’s, this recession will exaggerate weaknesses, cut off escape hatches and intensify pressures on government.

Greater borrowing to stave off its worst effects will only intensify the crisis when banks grow nervous and interest rates rise. The PFG says the debt burden will be reduced when the economy returns to growth. Whether or not the economy returns to growth in the lifetime of this government, austerity measures such as tax increases and public spending cuts are likely to take place a few years down the road.

Sinn Féin have promised to organise the “most effective Dáil opposition” in the history of the State. They are likely to put on a “left” face to build support among working-class people but to combine that with signals to the capitalist establishment that it can lead the government after this one in a “responsible” fashion. Despite the fact that Sinn Féin are likely to grow their electoral support, such a balancing act will prove challenging in the context of very deep class divisions opening up in society.

No such balancing act will be necessary for the Socialist Party (ISA in Ireland) and other working-class fighters. Big opportunities will open up to connect with workers and young people and to play a leading role in the struggles that will erupt.

While SF may capture the majority of new radicalized votes, the Socialist Party has the potential to gather hundreds of activists around ourselves, particularly from amongst the youth. A bold turn towards the youth by the party can put the issue of 500+ members on the agenda.

This would be a really significant development as Irish society enters a period of history characterized by the deep class divisions referenced in Varadkar’s comments.