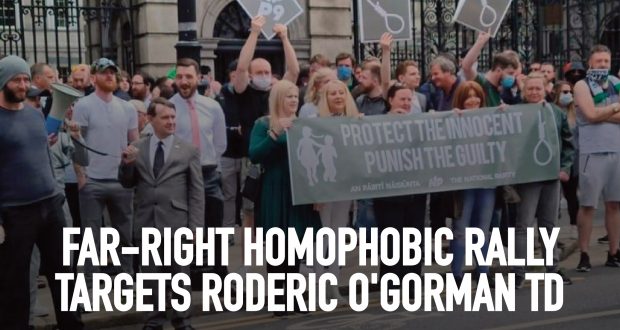 The Socialist Party condemns the homophobic campaign being waged against Roderic O’Gorman TD. It is clear that the driving motivation here is for far-right reactionaries to whip up vicious homophobic attacks in a twisted attempt find an echo for their backward political agenda.

What was it about?

These hypocrites claimed they were staging a protest to protect children on Saturday 11 July. What actually happened on Saturday was a protest laced with misogyny, racism, homophobia and transphobia. The turn-out, while small, was larger than previous far-right rallies because the reactionaries played a very cynical card claiming that they were standing for the rights of children.

Far-right forces such as Gript media, the Irish Freedom Party and the National Party are trying to assert that O’Gormon has associations with apologists for child abuse. A photograph has been circulated of O’Gormon standing with Peter Tatchell at a Pride festival in 2018. Tatchell is primarily known as a longstanding campaigner for LGBTQ rights but has also made very problematic comments which have the effect of excusing or minimising the issue of child sexual abuse. There is no evidence whatsoever that O’Gorman knew about or agreed with the comments..

Orchestrated by the far-right

The far-right have targeted O’Gormon because he is a gay man. They have clearly meticulously searched his social media history in an attempt to create a story to damage him in light of him becoming Minister for Children, Disability, Equality and Integration.

Although political criticism can be levelled at O’Gormon and the Green Party for, among other things, propping up Fine Gael and Fianna Fáil in power, we need to be clear that the far-right’s attacks on O’Gormon are utterly rank. This is a homophobic campaign which seeks to attack not only O’Gormon himself but the LGBTQ community as a whole.

A protest by hypocrites and bigots

The “Save Our Children” rally heard a speech by John Connors, actor and activist for traveller rights, in which he pointed to the fact that poverty and homelessness among children isn’t a priority for this government, which is illustrated by the programme on which the government was formed. However, this was simply cover for a speech full of backward ideas to a far-right audience who have no interest in lifting children out of poverty.

To end child poverty we need to take on big business, banks, and right-wing governments who conspire to direct society’s wealth from the majority to a tiny wealthy elite. Fine Gael, Fianna Fáil and the Greens support this unequal system, but so do the far-right. The far-right’s vision of change in Ireland is to have more Irish capitalists, while scapegoating migrants and marginalised groups.

Nor has the far right any credibility when it comes to protecting and fighting for the rights of children. This was perfectly displayed on the demo itself by their outrage at plans to progress legislation on gender recognition for young people. Evidently young trans people don’t exist in the bizarre world of the far right, or are undeserving of rights. This alone exposes their faux concern for children.

The conduct of the far-right organisers was disgraceful. A banner was brought to the demonstration which featured a noose. This is extremely inflammatory against Roderic O’Gormon, and when you listen to the content of Hermann Kelly’s speech and add the content of the banner together you can clearly see a scapegoating approach which insinuates violence is just and right against any of those who stand in the way of the far-right’s agenda.

Also worth noting is the violent attack on the day of the protest against antifascist demonstrators, which saw a significant swathe of the far-right contingent attacking a smaller antifascist group.

The pathetic coalition of the Irish Freedom Party, the National Party and other far-right forces are using this non-issue with one aim only in mind: to stoke up division along the lines of sexuality, race and gender. This is clear if we examine some of the leading figures of Saturday’s protest.

One of the leading organisers of the “Save Our Children” rally, one needs only look at his past credentials to realise his deceitful motives. Kelly was editor of The Irish Catholic ‘newspaper’ during the thick of the abuse scandals and reports. It’s peculiar that last weekend’s protest seems to be his first public appearance and commentary expressing concern about the welfare of children.

In Kelly’s speech that he delivered on Saturday, he stated that he hated the term “your choice”. This was a dog-whistle attack against women and pregnant people’s right-to-choose. In his speech he used terminology such as “LGBTQ plus minus” in a mocking punch-down of the LGBTQ community. In the same breath, he claimed that “official Ireland” is opposed to challenging child abuse. This assertion was followed with the claim that abortion is child abuse.

In the same speech, Kelly spoke of the agenda of PPP “Paedophilia Promotion Parties” such as Sinn Féin and the Greens with an intention to promote an immigration policy of “abort and import”. The inference here is that migrants are not welcome in Ireland. What about the children of migrants? One can only imagine Kelly’s reprehensible views on these matters.

Arch-reactionary Justin Barrett was spotted beside the main banner at the rally on Saturday. He has a penchant for addressing crowds at neo-Nazi rallies in Germany. Barrett spoke at events organised by the neo-Nazi National Democratic Party of Germany several times, and was the guest of honour at one in which anti-Semitic speeches, peppered with quotes from Adolf Hitler.

Barrett is the former leader of anti-abortion group, Youth Defence, and has been involved with them since the 1990s. He is currently the leader of the far-right, anti-gay, anti-women, anti-immigration National Party.

“An absolute shame to see John Connors, one of the few mainstream voices we Irish Travellers have, yet again speak at a rally organised by white supremacists and fascists. John, you often talk a good game when it comes to rights for Travellers. But here you are siding with the enemy that will do more than anyone to destroy our people, and that is the far right.”

At best John Connors is acting naively, and is being manipulated and misled by cretins such as Kelly and Barrett. At worst he is aware of their far-right, fascistic agenda and is accompanying them willingly. Regardless, his homophobic and transphobic views are deplorable and must be challenged.

Oppose far right at every turn

Justin Barrett and Hermann Kelly in particular are not to be trusted. All they offer is misery and division of working-people. They have no solutions for the housing crisis, the healthcare crisis and the social problems facing humanity. They seek to scapegoat migrants, the LGBTQ community and other marginalised groups to forward their right-populist agenda.

Their involvement in orchestrating this attack on Roderic O’Gorman TD is nothing but their attempt to gain publicity and promote their abominable politics. These people should never be taken in good faith and should be opposed at every turn.

Saturday’s far-right demonstration needs to be noted and checked, but what also needs to be noted is how they were not comfortable surfacing during any of last month’s Black Lives Matter demonstrations. The cowardly far-right try to insert themselves into the limelight when there is an ebb of left-wing struggle. To knock back the far-right we need to build movements against social oppression, against capitalism and for a socialist transformation of society. Building a socialist pole in society is the optimum way to fundamentally knock back the far-right when they try to raise their cretinous heads.