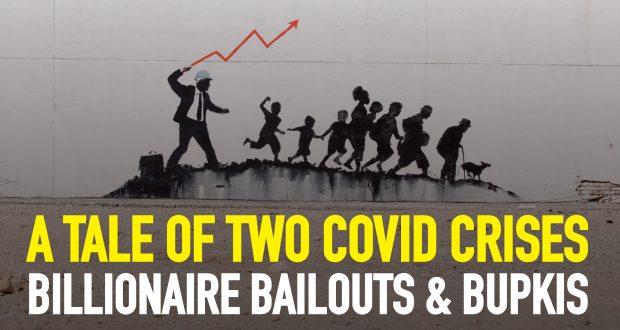 We’re all in this together apparently. But, like a ship that’s taking on water after a frontal collision, only one end of the vessel is going under; the other end is ascending.

The Covid-19 pandemic is very much upon us, and we are all well aware of the strong economic implications. The World Bank predicted in June that the global economy would contract by 5.2% in 2020 – losing more than one euro out of every 20 compared to last year.

Furthermore, it predicts a contraction of 7% across developed countries, and a simultaneous recession involving the largest fraction of countries since 1870. In short, the economy is taking a hammering. Looking specifically at Ireland, the European Commission has predicted a decline of 8.5% in GDP in 2020.

To get some perspective, let’s consider the figures from the Great Recession. The World Bank reports that the world economy fell by 1.7% in 2009 (the worst annual growth rate they have ever reported until now). In that same year, the Irish economy – which was in freefall, one of the worst affected economies – contracted by 5.1%. The dislocation and misery experienced in the 2008-2009 crash was enormous, and the figures for this year are worse. This is a very bleak picture.

The figures for GDP decline present the situation in a dry way, devoid of human experience. Other metrics give more of a sense of the lived reality. The International Labour Organisation (ILO) has predicted a possible 10.5% drop in hours worked internationally as a direct result of the pandemic – the equivalent of 305 million full-time jobs.

Softening the blow – for now

In wealthier countries, the impact of this has been softened somewhat by the introduction of emergency payments such as the Pandemic Unemployment Payment (PUP) in Ireland, but there is little or no such provision for the tens of millions who have lost work in the developing world. Even where such provisions have been made, there has still been a powerful impact on many who have lost their jobs.

While Leo Varadkar has made headlines with unsupported allegations of people asking their bosses to fire them as they would earn more on the PUP, and hints that building workers are fraudulently claiming the PUP, the reality is that €350 per week is not enough to cover the commitments of many people who have lost their jobs. Solid evidence for this is found in the figures released by the Central Bank on so-called ‘payment holidays’, whereby banks allow a temporary break in debt repayments in cases where the pandemic has made continuing payments impossible – 9.6% of mortgage debt, 6.6% of personal lending, and over 25% of lending to small & medium businesses has been granted payment breaks.

It is increasingly clear that many small workplaces will struggle to reopen, and that some job losses will be permanent. There is also a growing fear within the capitalist class that the current recession may be deep and long-lasting, a perspective shared by socialists.

Bailouts for the billionaires

Yet despite all of this, stock markets are doing just fine. The US Dow Jones Index has recovered almost all of the ground it lost at the onset of the pandemic in the US, as has the German DAX, while the French, British and Irish stock markets have also rebounded. How can this make sense? When demand has crashed, jobs are in grave danger, and deep recession looms, how can stock markets rally in this way?

The answer, of course, is that governments and international entities such as the EU are pulling out all the stops in order to support and sustain the ruling class during this period. Trillions of dollars are being pumped into banks in order to allow them to lend. The thrust of this governmental initiative is not to support those who are suffering the most.

None of this money is going directly to those who are out of work, facing likely mortgage default or inability to pay rent and subsequent eviction; it is not going to parents who can’t afford to provide their kids with decent diets; it is not going to the shockingly large number of homeless people; it is not going to provide improved provision for carers; it is not going to support refugees and asylum seekers who are living in appalling conditions in many countries. Instead these trillions of euro are being provided as support to the capitalist class itself, to the richest and most powerful in our societies, to cushion them from the effects of the recession.

It is a result of these policies that three billionaires – Jeff Bezos, Mark Zuckerberg and Elon Musk – added $115 billion to their fortunes so far this year (a larger sum than the the GDP of Cameroon – a country of 26 million people).

This should be no surprise, as it is essentially what was done (albeit more slowly) following the 2008-2009 economic crash. And it should also be no surprise when we find that austerity is being reintroduced in order to cover the costs of bailing out the capitalists – as an example, we already see in Ireland that rates of PUP are being reduced and protections for renters are being watered down.

There is a better way of approaching this situation. This money could be used to directly support those who have been heavily affected by the pandemic – why should this money go to banks and not to the people who have lost their livelihoods? And why stop there? Why not reorganise our society so that it provides for its members, ensuring decent housing, healthcare, education, childcare, social care for all who need them?

That will never happen under capitalism however, as capitalist governments will invariably act in the interests of the capitalist class. In order to sweep away the illogical and cruel approach of today’s governments, we need to sweep away capitalism itself and replace it with a system which prioritises people and not profit – in other words, socialism.a 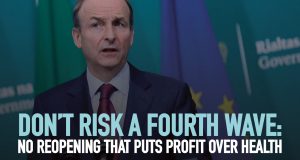