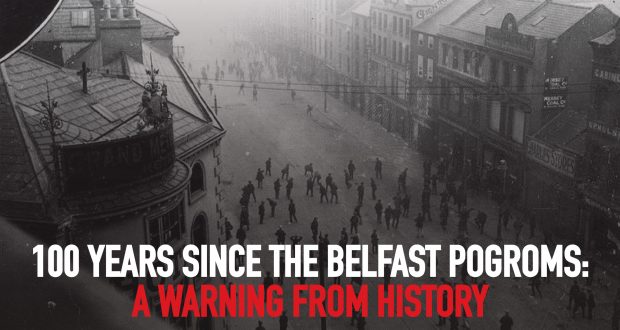 This week marks 100 years since the outbreak of the Belfast pogroms, when the city saw serious sectarian violence and the expulsion of an estimated 10,000 men and 1,000 women from their workplaces, starting in the shipyards and spreading to other workplaces. The violence also spread to the Belfast slums with 22 killed and hundreds wounded. It was the start of a period known as the first ‘Troubles.’ Between June 1920 and June 1922, 428 people were killed and tens of thousands kicked out of their homes, similar to the early phase of the later ‘Troubles.’

The violence erupted when Colonel Smyth, the divisional commissioner of the Royal Irish Constabulary (RIC), was shot by the IRA in Cork and his remains brought back to his home in Banbridge. Sectarian gangs used this as the pretext to follow Edward Carson’s advice in his 12th July speech and “take matters into their own hands”, rather than rely on the British government.

After the killing, the ultra-sectarian Belfast Protestant Association (BPA) organised a show of strength at the shipyard, where revolvers were displayed and the decision taken to drive out ‘Sinn Feiners.’ This is how one expelled worker described what happened:

“The gates were smashed down with sledges, the vests and shirts of those at work were torn open to see if the men were wearing Catholic emblems, and then woe behold the man that was. One man was sat upon, thrown into the dock, had to swim the Musgrave channel, and having been pelted with rivets, had to swim two or three miles, to emerge in streams of blood.”

It wasn’t just Catholics who were expelled, but also 3,000 Protestants commonly known as the “rotten prods.” Many of those targeted – both Catholic and Protestant – were labour activists, including leaders of the engineering strike the previous year. It is worth emphasising this fact as it is an important factor often ignored in popular accounts of the pogrom, Indeed, in Carson’s speech, he particularly targeted ‘men who come forward posing as the friends of labour’, whose real object was ‘to mislead and bring disunity amongst our own people’.

who “mislead and bring about disunity amongst our people.”
Charles McKay, the Catholic chairman of the engineering strike committee, was driven out, as were Sam Kyle, James Baird and John Hanna, Protestants who were leaders of the strike.

“Every man who was prominently known in the labour movement, who was a known ILPer (Independent Labour Party) was expelled from his work just the same as the rebel Sinn Feiners. To show their love of the ILP they burnt our hall in North Belfast. The chair of our central branch had to flee to Glasgow for his life. The secretary had to fly all the way to London. The district chair of the AEU (engineers’ union), a very moderate and quiet Labour man, was beaten not once but two or three times because he persisted in returning to his work.”

John Hanna had previously been a Worshipful Master of an Orange Order Lodge, but then a collaborator with trade union and socialist leader, Jim Larkin. He commented that,

“During the strike for a 44-hour week, the capitalist class saw that the Belfast workers were one. That unity had to be broken. It was accomplished by appeals to the basest passions and intense bigotry.” Sam Kyle also commented that the strike “gave the biggest scare to the Tories they ever had and probably led to the engineering pogroms in 1920.”

The engineering strike the previous year was a united struggle of Catholic and Protestant workers for a 44-hour week. That struggle – linked with massive industrial battles in Britain – showed the enormous power of working-class people in Belfast, who effectively took control of the city. The fear of the ruling class was that the movement could link up with the revolutionary upheaval in the south of Ireland – symbolised by the establishment of the Limerick Soviet – and threaten not just British imperialist rule, but capitalism itself. The potential for such a movement was demonstrated in the local elections in early 1920, where Labour candidates won seats in every part of the city.

For the capitalist class, therefore, it was necessary to use every conceivable method to divide workers and bring sectarianism into the workplaces. Employers gave permission to extreme sectarian groups, such as the BPA, to hold meetings and make inflammatory speeches, encouraging attacks and expulsions in the months leading up to July. Indeed, at the meeting which kicked off the pogroms, the BPA declared that “employees should stand by employers.” Importantly, many of those involved in the pogroms were demobilised soldiers, who had not experienced the struggle of the engineering strike and had returned home to find a lack of jobs.

The pogroms acted to terrorise the Catholic minority and drove the core of militant trade unionists out of the workplaces. In the aftermath, leaders of Unionism – including both Edward Carson and James Craig – boasted of supporting the actions of the pogromists. Employers continued to allow sectarian organisations to have meetings in the workplace and thanked ‘loyal’ workers for their efforts by hiring them to replace those expelled – but on lower wages. A trade union report from the year after showed, for example, that woodworkers ended up losing 12s 6d a week and joiners 12 shillings a week. In the North, many of the sectarian gangs involved were later to be incorporated into the new state’s police force and reserves, including the notorious B-Specials.

For the British ruling class, this was part of their strategy of ‘divide and rule’, reflected in their push towards partition with The Government of Ireland Act in 1920. As Peter Hadden explained, “(Partition’s) foremost intent was not merely to draw a geographical line across the map of Ireland but to gouge a deep line of bigotry through the living body of the working-class movement,” with the creation of two reactionary, sectarian states.

They were assisted in this process by the actions of the Southern government, who called for a boycott of goods from Belfast, and by the IRA, who attempted to wage an ineffective military campaign in the North. In the eyes of many Protestant workers, these actions confirmed their fears about what an independent capitalist Ireland would mean for them, and served to reinforce division and consolidate partition. Later the Free State government took a very different approach and, in reality, sought to cover up the scale of the pogroms in Belfast for fear of inflaming anti-Treaty sentiment in the context of the civil war. This is reflected in the fact that a pamphlet ‘Facts and Figures of the Belfast Pogrom 1920-1922,’ produced by a Belfast priest under the pseudonym G.B. Kenna saw thousands of its copies pulped by the Free State government, with only 18 copies circulated.

The tragedy, of course, is that this was not inevitable. The ruling class were right to be nervous. Struggle had created an important basis for unity of Protestant and Catholic workers, North and South. Had a political organisation been built which linked these struggles to a clear vision of a socialist Ireland – free from poverty, oppression and coercion – then history could have taken a very different course. However, because of the vacuum created by the absence of such a force, sectarian forces were able to regroup and go on the offensive, particularly in the context of a new economic slump and a rise in unemployment.

The lack of decisive leadership in the labour movement was also reflected in its inability to take action against or in response to the pogroms, with the exception of the Amalgamated Society of Carpenters and Joiners, which was able to bring 600 of its members out on strike to demand the reinstatement of expelled workers. The failure of the trade unions to consistently challenge sectarianism in the previous period left them paralysed at this crucial moment.

The 1920 pogroms were far from the only instance when sectarian forces reasserted themselves in the aftermath of high points in class struggle. The 1907 dockers’ and carters’ strike was followed five years later with expulsions from the shipyards in response to members of the Ancient Order of Hibernians attacking a Protestant school. The heroic 1932 outdoor relief strike, which united Catholic and Protestant unemployed, was followed by pogroms in 1935. 1968 – a high point of class struggle and the civil rights movement – was followed quickly by the onset of the decades-long conflict known as the Troubles. Historians have also compared the Belfast pogroms to similar events that happened in the same period, which were used by the forces of reaction not just to divide workers but, crucially, to remove militants from the workforce.

This is not an iron law, of course, but reflects the fact that, while workers will instinctively eschew division while engaged in common struggle, sectarianism will again come to the fore if this unity is not consciously solidified and built upon politically. With the correct leadership and a skillful but combative approach, it is also possible for the working-class movement to take action to cut across sectarian forces in the workplace.

For example, the Belfast shipyard is obviously remembered for these historic events and other sectarian incidents. However, there is also a history of common struggle and of organising against sectarianism. At the start of the Troubles in 1969, for example, shop stewards organised a mass meeting of the workforce because Catholic workers had not come to work for fear of sectarian attacks, particularly because of the memory of the events of 50 years beforehand. At the meeting, senior shop steward Sandy Scott appealed: “If we act as workers, irrespective of our religion, we can hope for an expansion in work opportunities and a better life.” A resolution in opposition to sectarian violence was unanimously passed. The shop stewards then visited the homes of Catholic shipyard workers, successfully appealing to them to return. At the same time, Ian Paisley was only able to mobilise 180 out of 8,000 to support his rallies. There are countless untold stories like this that happened during the start of the Troubles and throughout.

Organise against the bosses and sectarianism

The primary beneficiaries of the pogroms were the bosses – not just because they were able to cut wages, but because the pogroms assisted in cutting across the potential for common struggle of workers – Protestant and Catholic, north and south. It is one of many examples which underline the need for the workers’ movement to combat sectarianism in all its forms.

Today, sectarian division remains a fact of life. The right-wing forces of Unionism and nationalism remain dominant, housing remains largely segregated in working-class communities and the vast majority of children attend segregated schools. Left unchallenged, the danger is not simply a continuation of the current imperfect peace but the potential for a return to sectarian conflict. Yet we also see the potential for struggle to overcome that division – in the health strikes which involved tens of thousands of workers, in battles to save jobs, in the movements of young people against racism, sexism and climate change. We need to build a political force which ties these struggles together and offers workers and youth an alternative to division, poverty, oppression and environmental destruction. Ultimately, only a struggle for a socialist future can consign sectarianism, and the capitalist system in which it thrives, to the history books.

For more information on this important period in Irish history, get your copy ‘Divide and Rule – Labour and the Partition of Ireland’ by Peter Hadden, or for more information specifically on the 1919 engineering strike, get a copy of ‘Workers’ Power in Belfast’ by Kevin Henry 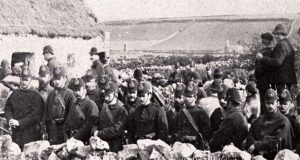 Fine Gael forced to back down from celebrating repressive colonial police