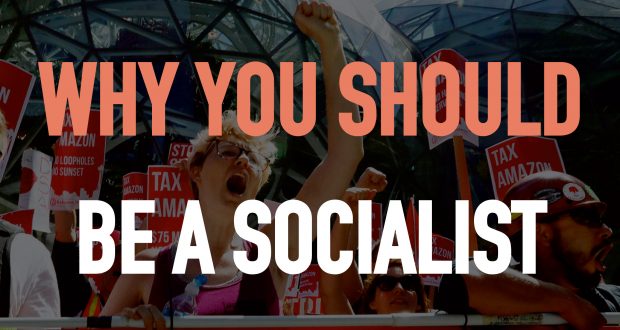 Stability, prosperity and progress: Some of the common catchwords capitalism’s most staunch defenders have used to justify a system that places private profit before all else. Yes there are flaws, but, so the story goes, the positives outweigh the negatives and, really, no other organisation of society is feasible.

Barely halfway through 2020 and such illusions have been wholly shattered. In the context of a global pandemic, an economic depression and the continuation of racist police murders in the US, the profoundly chaotic and violent nature of capitalism has revealed itself to an ever growing number of workers and young people across the globe.

Four hundred thousand people have lost their lives to a virus that continues to spread. Countless have lost loved ones and many more have had their lives turned upside down by job lay-offs. Poverty and evictions are already a reality for millions, and a looming threat for many more.

In the midst of such turmoil the top five billionaires in the US have expanded their wealth by $75 billion. Governments and big business hastily push for reopening with little regard for the safety of workers and their families.

The polarisation is astonishing. Has it ever been clearer that, in the words of Karl Marx and Friedrich Engels, “society as a whole is more and more splitting up into two great hostile camps”? The tiny elite that will do all it can to continue profiteering, and the great majority of people left to face exploitation, oppression and misery.

Such a portrayal can appear bleak and indeed many have felt a sense of helplessness at the rapid development of events. Yet there is much to be optimistic about. A new generation are drawing radical conclusions about our current economic system and its inability to provide for the most basic needs of humanity and the planet – and already are displaying their willingness to fight like hell for a better world.

The brutal murder of George Floyd, the harrowing footage of the police officers knee upon his neck as he gasped for air and struggled to utter “I can’t breath”, produced revulsion and fury amongst not just black Americans, but hundreds of millions worldwide. Floyd’s murder sparked an inspirational explosion of protests, fuelled by a generalised discontent that had been bubbling beneath the surface for years.

Led by black youth, the multiracial movement quickly swept across every state, major city and thousands of small towns in the US. Those marching want an end to widespread police brutality but are also targeting the systemic racism that’s interlocked with American capitalism.

Almost immediately the BLM spread across borders. Young people, particularly those of colour, have organised solidarity protests on every continent. Fifty thousand attended a march in Austria, 5,000 in Dublin. 2,000 in Belfast and amazingly over 500 in Dingle, Kerry. This global solidarity highlights the incredible internationalist consciousness of young people, how movements in one part of the world can inspire others to take action on the same issues.

In Ireland as elsewhere those supporting the protest are under no illusions that racism is a problem unique to the US. As Malcolm X said “you can’t have capitalism without racism.” The capitalist state in the south maintains and defends the despicable system of Direct Provision that sees thousands of asylum seekers kept in subhuman conditions.

Fine Gael and Fianna Fáil politicians have regularly resorted to anti-Traveller and anti-immigrant rhetoric, attempting to create scapegoats for people’s genuine anger over shortages in housing, overcrowded hospitals and lack of spaces in schools. In the North and in Britain the Tories have aggressively pursued the “hostile environment” strategy which aims to pressurise immigrants to return home. By stoking ethnic, racial or sectarian  division those in power divert attention from the real source of the problem and undermine united action to tackle them.

In reality, the history of capitalism has always been one of war, slavery and immeasurable human suffering. Yet it is also one of revolt, rebellion and revolution of the working class and the oppressed. The system’s cheerleaders go to great lengths to convince us otherwise, however. As Karl Marx understood “if you can cut the people off from history, they can easily be persuaded.”

As new movements continue to emerge against racism, sexism and inequality, workers and youth will grope for the new ideas to advance forward.  The Socialist Party proudly stands in the best traditions of the working class in Ireland and internationally, drawing inspiration from a rich history and applying them to the present.

Our Record: Socialist Ideas in Action

From the GAMA workers dispute 2004, where we helped expose the criminal exploitation of migrant workers, to the more recent battles of workers be it in the health sector, shipyards or retail is one of uncompromising support for workers in struggle.

Along with student members, Socialist Party and Solidarity TD Mick Barry initiated a massive online rally of 2,500 young people that helped put pressure on the government to cancel this year’s Leaving Cert, highlighting its repressive and class prejudiced nature.

Just as the struggle against racism must be anti-capitalist, so too must the struggle for women’s liberation. Socialist Party activists played a pivotal role in winning 12 weeks on request in abortion the rights referendum 2018 and to win the decriminalisation of abortion in the North. Similarly, former Socialist Party and Solidarity TD Ruth Coppinger used her position to expose the appalling verdict of the Ulster Rugby Rape Trial and the sexist nature of the courts generally.

Recently, Mick Barry and Ruth Coppinger, along with other Socialist Party members, have fought alongside workers in Debenhams who were outrageously sacked from their jobs when the company used the Covid-19 crisis as a pretext to do so. We have demanded that the company be brought into public ownership, with workers being put at the heart of management.

As part of the International Socialist Alternative, that organises in 40 countries we have members on the ground in Minneapolis and other cities across the US actively building the BLM movement.

We’re not outnumbered. We’re out organised.

To once again quote Malcolm X “We’re not outnumbered. We’re out organised.”

The lockdown vividly demonstrated who makes society run – not the bosses, not the bankers, not landlords or developers but the multiracial, multi-gendered working class. As the majority in society we possess an enormous strength. When properly mobilsed, we can unite across the divisions the ruling class attempts to sew amongst us and be a colossal force for carrying out the revolutionary transformation of society so desperately needed.

Join the Socialist Party today and become an active participant in the building of an international movement of the working class and youth that strives for a world based on need, not profit and free of all forms of racism, sexism and oppression.