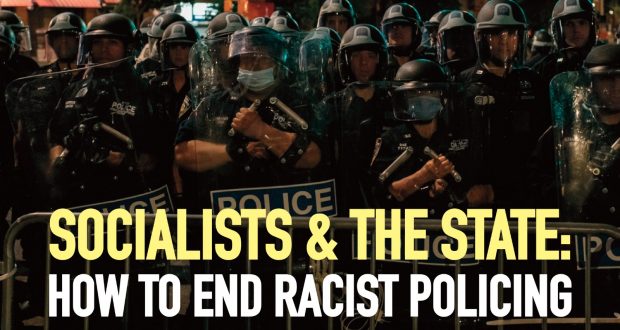 The nature of policing in the United States is inseparable from the violent, racist history of capitalism in this country. From slave patrols; to Bull Connor’s unleashing dogs and fire hoses against black protesters in Montgomery during the Civil Rights movement; to the police lynchings in black communities today; there is a consistent thread.

Police and state repression has also historically been unleashed against workers trying to unionize, radical organizers, and any serious struggle that threatened the interests of the ruling class. In 1932, President Hoover sent in infantry and tanks to smash the encampment of white and black veterans in Washington D.C. demanding their long-promised World War I bonuses. On May 30, 1937 (link includes video footage), the Chicago police shot 40 unarmed striking steelworkers outside the gates of Republic Steel, killing ten. In 2006, ICE staged mass Gestapo-style raids at meat plants in the Midwest, followed by mass deportations of immigrant workers, with the aim of crushing the mass immigrant rights movement and because these workers were getting organized.

The role of the police

As Frederick Engels explained over a hundred years ago, the emergence of the state repressive apparatus, including armies, police, prisons, etc, historically reflects the division of society into social classes with antagonistic interests. The state consists, in Engels’ words, of “armed bodies of men,” which keeps class antagonism “within the bounds of order” but at the end of the day defends the interests of the dominant class – which, in our society, are the billionaire capitalists. An inevitable part of maintaining the wealth and domination of the ruling class in a society as unequal as ours is repression and the threat of violence.

From slavery to Jim Crow to the institutionalized racism and segregation of today, maintaining racial division has been an underpinning of capitalist rule in the U.S. In order to form powerful industrial unions like the United Auto Workers in the 1930s and ‘40s, radical union organizers had to push back against poisonous racism, fostered by bosses like Ford to maintain their control. Without taking a clear, anti-racist position they would not have succeeded in convincing white and black workers to fight together and win historic victories that benefited the entire working class. This movement was so powerful that it could have been the beginning of challenging capitalist rule itself.

The aggressive policing of poor black and Latino neighborhoods today is meant to keep people literally penned in to substandard, segregated housing and schools. But racist politicians have also sought to present poor people of color as a threat to better-off white working class and middle-class communities to gain wider support for these repressive policies.

It is not possible to create a completely “non-racist” policing as long as institutional racism and segregation are left intact. Nor can the police be “abolished” within the framework of a capitalist society. As long as the capitalists rule they must and will find a way to protect their interests and their property. But that does not mean that there is nothing we can do short of getting rid of capitalism itself.

The changes won in the first phase of the Black Lives Matter Movement, including more training and body cams, have proven to be completely inadequate. Nevertheless, policing can be changed significantly and mass incarceration can be wound down. However, such gains can only be won by a mass movement of the type which has burst forth after the horrific murder of George Floyd. To win real and lasting gains, the movement needs to be sustained, refuse to be co-opted, center on mobilizing the social power of working people, and articulate a wider social program.

The current movement has demonstrated that the mass of the population rejects the odious, reactionary racism which is rampant in the police force. This rejection of racism is enormously positive. What is also exposed is the massive web of protection around the police. They have been given virtual legal immunity for almost any crime. They are a caste which is not under any democratic control. Sent by the ruling class on a mission to keep the population and especially the black community “in line,” it is now difficult for even the establishment to reign them in.

The mass movement has exposed real divisions in the political establishment about how to deal with policing. The position of Trump and the most reactionary elements to massively increase repression has been isolated. Another wing of the establishment represented by Mayors Durkan in Seattle and de Blasio in New York seeks to maintain the status quo but is in retreat at the moment under the pressure of the movement. A third wing seeks to co-opt the movement by adopting the movement’s call to defund the police and then weaken it. In Minneapolis, the majority of the City Council went as far as to commit to “disband” the police department. But almost immediately they began to retreat from this position, saying they are opening a one-year period to look into alternative policing arrangements. This is a time-wasting exercise. We need change now!

We need to make the demand for defunding more concrete. Seattle socialist Councilmember Kshama Sawant has called to cut the police budget by 50% and is leading the fight to Tax Amazon in Seattle to fund permanently affordable social housing, social services, and jobs. We must demand once and for all that police policy, including hiring and firing, be brought under the control of democratically elected civilian boards. There must be an immediate purge of the police of all cops with a record of racism and excessive force in the community. As in many other countries, the police should not be armed on patrol. A police force that is brought under democratic control, even to a degree, would lessen the oppression of the black working class especially but it would actually benefit the working class as a whole.

Divisions among the police

We must also recognize that the police are not one homogeneous mass. The reactionary wing is very strong and dominates most local police forces around the country. But while there have been performative acts of “taking a knee” by cops who later violently attacked protesters, there have also been signs of genuine sympathy from some ordinary cops. A recent letter from 14 officers in Minneapolis claims to speak for hundreds of other cops in denouncing Derek Chauvin and supporting reform. This is a limited and positive step but it would have been completely inconceivable without the pressure of the mass movement.

If there are ordinary cops who really want reform and a different relationship with the communities they work in, then now is the time for them to stand up and work to push out the likes of Bob Kroll – the Trump-loving, far-right head of the police union in Minneapolis. We believe in the right of the police to form unions so that they have a way to resist being used by the ruling class against working people. But that’s clearly not the role these unions are playing today.

The truth is that the police forces in many cities have used their participation in the wider labor movement to give themselves cover. The labor movement cannot be silent. It must defend the black working class and immigrant communities abused by the police. It must demand that police unions reject racist policing policies and agree to support a purge of the police to remove those with a record of violence and racism in order to remain in or join labor councils.

A safe and just society

To live in a society where people do not have to fear state repression and racist subjugation we have to get rid of capitalism. As we point out in a recent article on the rebellion in Minneapolis:

“A central task of a workers government, where key corporations are brought into public ownership and working class people have democratic control of the economy, is to combat the racist legacy of slavery, imperialism and inequality of all forms, and create the conditions for a society truly free from racist policing, exploitation and oppression. This will include working class communities organizing their own safety and protection.

“The process of dismantling the police, prisons and state repression generally is intertwined with the process of ending and moving beyond capitalism, and establishing a truly egalitarian, classless socialist society. This will not be done by Minneapolis City Council, but through the conscious organization of working class people into a revolutionary movement.” 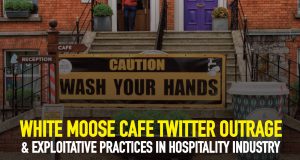 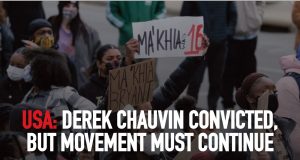