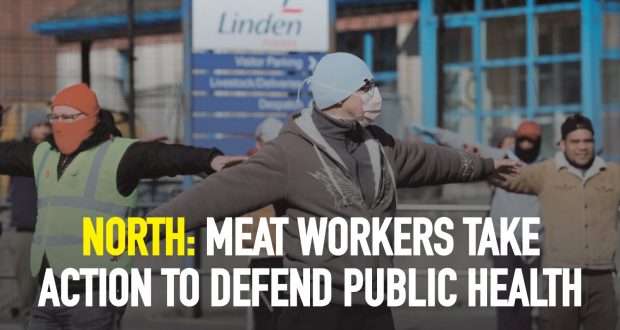 “If the disease was in the animals, they’d have closed the place. But for workers, the factories can do what they want.” – Worker in an Irish meat factory, speaking to The Guardian

Even at the best of times, working in meat processing can be tough. It is physically demanding, repetitive and, for many, unpleasant by nature. It is also an industry where low pay is the norm, with migrant workers making up much of the workforce. However, meat workers are now facing a new and serious threat in the form of Covid-19.

Temperature testing has been implemented widely across the sector in Ireland. However, given that many people carrying the virus are asymptomatic, this is ineffective unless coupled with other measures. Workers in many factories report that, at least initially, PPE and distancing measures were inadequate at best.

In late March, around 100 workers at Moy Park – the largest private sector employer in the North, which made pre-tax profits of £64.5 million last year – in Portadown staged a walkout over lack of enforcement of safety measures. Similar protests by workers took place at ABP Meats in Lurgan and Linden Foods in Dungannon. These actions did win some improvements in conditions.

The latest walkout took place on Monday 11th May at the Foyle meat factory in Omagh, where a major cluster of infection had emerged, with around 40 staff affected. The company has since boasted of implementing a ‘100% testing policy’ of its staff. However, workers with access to a vehicle are being asked to make a two-hour round trip to get tested. More importantly, production has continued uninterrupted, with reports of workers being pulled from the lines when their tests come back positive.

Fight for workers’ control of health and safety

As across the economy, it is only action by workers which can ensure that public health is put before profit. Workers’ ability to disrupt production – and therefore profit – through strikes and other forms of industrial action provides the most effective way of winning improvements in health and safety, as well as pay and other conditions. The small but important walkouts which have taken place so far are testament to this. Workers can use this power to win control over management of health and safety.

A weakness in the meat processing sector, like in many others, is the relatively low level of union membership and organisation. The Socialist Party encourages all workers to join a trade union to safeguard their rights at work, but also to become an activist in their workplace where possible. However, there is a responsibility on the trade union movement to make a particular effort to recruit and organise in the midst of this crisis. That requires demonstrating a fighting approach which can win victories, but also overcoming language difficulties and any other barriers to reaching immigrant workers, who are often among the most exploited.