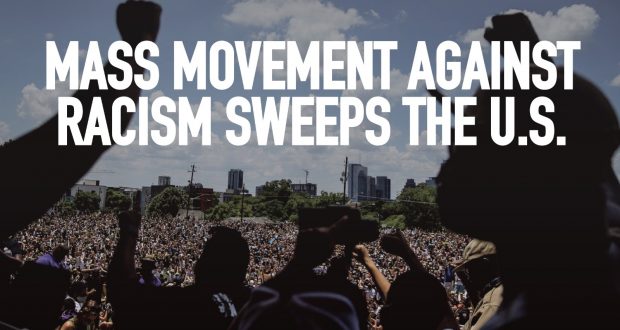 By Keely Mullen, Socialist Alternative (our sister organisation in the US)

At 8:25 pm on May 25 George Floyd stopped breathing. Moments later his pulse stopped. It was two minutes before Minneapolis Police Officer Derek Chauvin removed his knee from Floyd’s neck. Less than an hour later, he was pronounced dead.

On the day of George Floyd’s death, we had been on lockdown for more than two and a half months. Millions of Americans had lost loved ones to COVID-19, and were forced in many cases to grieve in complete isolation. Tens of millions had lost their jobs and many more lost hours or pay. June rent was fast approaching and again families were weighing up if they could pay rent and buy groceries, or if one would have to go.

All of this has disproportionately affected the black working class. Black people are three times as likely to get COVID-19 compared to white people. Millions of black workers have been either furloughed or laid off and the unemployment rate for black people is the highest of any demographic.

It is in this context, a system in complete freefall, that the death of George Floyd ignited the most extensive protest movement in the U.S. in 50 years.

Beginning in Minneapolis the night George Floyd was murdered, mass protests and occupations have overtaken the U.S. This marks a new and far more developed phase in the Black Lives Matter movement.

These protests are buzzing with energetic rage. They have been led mostly by black youth, but the crowds are notably multi racial. Young people of all races see this fight as theirs as well. Tens of thousands of mostly young people have been out in city after city with a simple overarching demand: no more police killings of innocent black people and an end to racist police brutality generally!

Unlike during the Black Lives Matter movement of 2014-2015, this movement has taken on the character of an all out rebellion and occupation in a series of cities.

In Minneapolis, protesters have turned the spot of George Floyd’s death into the headquarters for the movement. There is now a permanent encampment of the entire block surrounding the site of George Floyd’s murder.

Similarly, in Brooklyn, the blocks surrounding the Barclay’s Center are a near constant home to demonstrators. Almost like a shift change, children and families march during the day while teenagers and young adults replace them at night.

Trump and “Law and Order”

The transformation of these protests into a broader rebellion in some cities can be, in part, credited to the brutal response of the police to early demonstrations. They repeatedly used tear gas, rubber bullets, batons to the face, and – in a handful of instances – outright driving into crowds, against peaceful protests.

As brutal as the police repression has been, it doesn’t hold a candle to the brutality Trump wishes would rain down on demonstrators. He has urged governors to “dominate” protestors and has stated, “when the looting starts, the shooting starts.” He sent the U.S. military into Washington DC and has threatened to further deploy troops to other cities to put down the movement. He instructed police and the National Guard to teargas a peaceful protest outside the White House in order to clear a path for his photo-op holding a bible at St. John’s Church.

Trump has not found broad support for his authoritarian threats among the American public or even within his own administration, with high ranking military officials opposing the use of the military. Currently, 62% of Americans view the protests as legitimate. Even more surprising to the establishment, 54% of Americans believe that the burning down the 3rd precinct police station in Minneapolis was legitimate.

Trump’s approach, as well as the violent response from police to the protests, has only served to inflame the situation. He is trying to rebrand himself as the “law and order president” with his brutal response. He seems to want to hark back to Richard Nixon, who won the election in 1968 and ran on the same platform of “law and order”. But the context is completely different. In 1968, Nixon was the challenger while Lyndon Johnson and the Democrats were presiding over the debacle in Vietnam and massive civil unrest. Politically, Trump’s approach has benefited Biden who is firmly in the lead in national polls.

On a national level, the Democratic Party has issued mealy-mouthed statements of support for the movement. However at the same time, Democratic mayors and governors across the country are imposing curfews, approving massive spending on the police while cutting social services, and outright denying the violence of their own police forces.

Scandalously many Democratic mayors and governors echoed Trump and Attorney General Barr’s narrative that confrontations with the police and looting were the work of “outside agitators.” Trump banged on about anarchists like Antifa, at one point even saying he would declare it a “terrorist organization.” The Democrats, particularly in Minneapolis, spread fear and misinformation about a wave of white supremacists coming in to disrupt the demonstrations. There have been almost no facts brought forward to support these narratives which were meant to direct attention away from police violence and justify further repression.

The New York Times editorial board on Friday released a scathing op-ed detailing the dramatic failure of New York Mayor Bill DeBlasio, who ran in 2014 saying he would reform policing, and Governor Andrew Cuomo to meet the needs of this moment.

They wrote: “What pressing responsibilities have so occupied these two officials that they do not have the time to make sure the safety of New Yorkers is protected and the rights of New Yorkers are respected? How is it possible that after so many reports of police misconduct, they still can’t be bothered to supervise the police?”

This reflects divisions in the establishment with a section of officials beginning to push for more serious reforms to policing. In New York, the Manhattan and Brooklyn DAs have said they would not prosecute the many hundreds arrested for “unlawful assembly” and “disorderly conduct”.

In Seattle, there is a tremendous mood to drive Democratic Mayor Jenny Durkan out of office for her failure to reign in police officers terrorizing protestors. Kshama Sawant has joined this call and officially called for Durkan’s resignation.

Some City Councilmembers in Minneapolis have made bold promises to abolish the police. Undoubtedly there will be reforms to policing in reaction to the pressure from the movement. Yet in a world where eight billionaire men own as much wealth as the poorest half of the world population and 40 million Americans are currently unemployed, the state will always rely on some type of repressive force to maintain order. Socialists argue that a world without police can only be built on a foundation of guaranteed jobs, housing, healthcare, schools, and democratic control of society’s resource