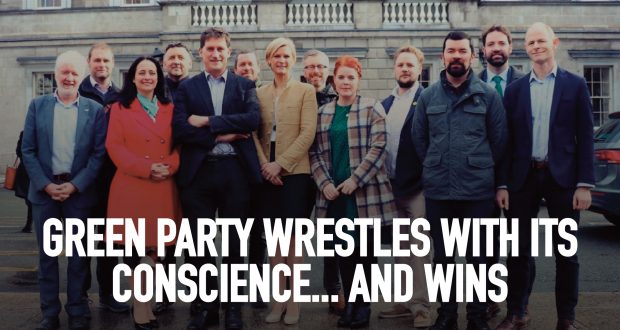 On the 26 June the Greens announced that they had secured the necessary two-thirds majority to enter government with Fianna Fáil and Fine Gael. In the end it was not even close, as 76% of their members supported the deal – a larger percentage than Fianna Fáil (74%), or a non-weighted measurement of the Fine Gael electoral college (68%).

This result demonstrated the continued dominance of the neo-liberal wing of the party as embodied by its leader Eamon Ryan. Its vision of environmentalism is a minimal and pragmatic one that seeks technocratic solutions palatable to capitalism and is often scornful of the very idea of a left / right divide in politics.

Their failure to emerge from the 2007-11 government with any significant achievements has not fundamentally changed their world view. As we enter another deep recession, they are due to enter government again. Whilst the Program for Government extracted some more environmental commitments than in 2007, these tend to focus on policies like the regressive carbon tax.

The bulk of the reduction in emissions envisioned for this decade are due in the second half, after the end of the government’s term of office, and in ways that aren’t specified. The reality of a period of green-tinged austerity combined with wholly inadequate plans in areas like housing and health, could even damage support for climate action among certain sections of society.

The section of the Green Party opposed to the coalition deal faced numerous obstacles. These included significant pressure from the media, the political establishment and much of the environmental NGO sector who campaigned for the Greens to enter government. They also suffered from confused messaging and a lack of any coherent alternative.

For example, figures like Neasa Hourigan opposed the deal simply on the pragmatic grounds that it wasn’t quite up to scratch in some areas, or that in some respects it promised too much! In an interview with Newstalk, Saoirse McHugh – one of the more radical voices opposed to the deal – outlined her preferences in the event of a successful rejection of the deal as being either a “national unity” government of all major forces, or one including Fianna Fáil, Sinn Féin, the Social Democrats and the Greens, illustrating that coalition with the right-wing establishment parties isn’t on principle the difference.

From the point of view of the environment, however, this is a fundamental mistake as these parties explicitly represent an environmentally destructive capitalist system, and will naturally and forcefully oppose any meaningful attempts to curb that system.

Green Party: no friends of the Earth

The endorsement of the Program for Government by deputy leader Catherine Martin (who had already won the support of most of those campaigning against the deal in her bid for leadership), was another blow to the opposition campaign. In the end, with Fine Gael temporarily boosted in the slipstream of Covid-19 and potentially open to an election that could be blamed on the Greens, a section of the party that may have been open to rejecting the deal purely for self-preservation’s sake, were brow beaten by the spectre of a possible election.

The bulk of the Green Party membership unfortunately shares the leadership’s piecemeal, technocratic view of how change works and have no inclination towards fighting the capitalist system that places profit-making above the survival of the planet. Any members who don’t share this view are now, and have always been, in the wrong party.

The looming end-of-decade deadline for achieving a 51% carbon reduction on the way to a zero carbon economy and averting a greater climate catastrophe has been a major driver of mass movements, particularly among school students internationally. This movement went into abeyance during the Covid-19 lockdown but will be back with a vengeance. Most of those school students in Ireland could not even vote last February and will not be in any way restrained from heeding fresh international calls to action.

In doing so they will be necessarily at odds with the Green Party in Ireland.