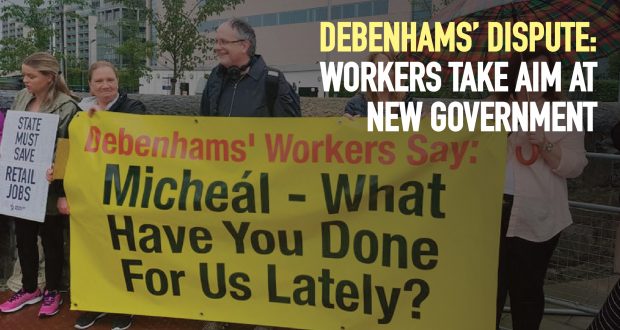 Debenhams’ workers protested outside the National Convention Centre and turned their focus for justice at the incoming Fianna Fáil, Fine Gael and Green Party coalition. Despite great adversity, workers have kept Debenhams on the national agenda.

Under pressure from Debenhams workers in Cork, incoming Taoiseach Micheál Martin has given verbal sympathy to claims for a just settlement.

The “new” government is sitting on the unimplemented Duffy-Cahill Report, written in response to the looting of Clery’s in 2016 and designed to give workers increased bargaining rights and the ability to recoup the value of assets shifted by the company. This should be implemented immediately and applied to Debenhams before any stock is sold on. The promised stimulus in July for the retail sector should not just be soft money for employers in the sector but used to invest directly in jobs including through public ownership of job shedding outlets like Debenhams.

Workers have justifiably raised criticisms of the role of their union Mandate. In almost four months, officially sanctioned actions have been at best sporadic with most of the protests being organised unofficially on the initiative of key shop stewards and activists. A clearer message is needed from the union on organising to prevent the disposal of stock including directing managers who are members of Mandate not to be engaging in stock takes.

As we go to press it is gearing up for a stand off between workers and the liquidator at the stores as KMPG attempt to move stock out. A general call for workers and activists to stand with the Debenhams workers if such a stand off takes place should be made and widely supported.

Debenhams’ workers are leading a campaign that should give example and courage to all workers who will be faced with these questions in the coming period.