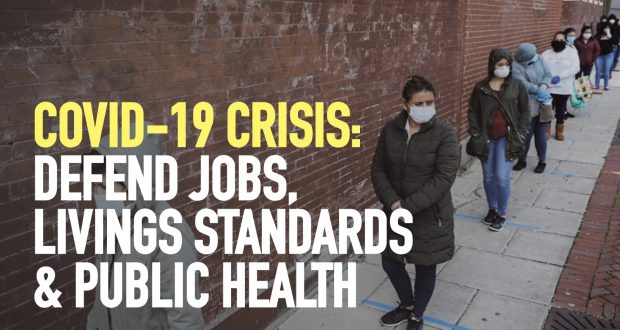 The scale and rapidity of job losses across the private and semi state sector arising from the necessary restrictions on commercial activity is without precedent, writes Michael O’Brien. Even compared to the Great Recession of a decade ago what took several years to unfold in terms of a steep climb in unemployment levels has been surpassed in a few weeks in the case of Covid-19.

The mood music of governments both sides of the border is one of not going down the austerity road. Such alterations in language should not be mistaken for either a sign of fundamental strength in the Irish and global economies being in evidence before Covid-19 restrictions. Nor should it be taken as a sign of any kind of genuine reappraisal of the austerity approach on the part of the main capitalist parties in Ireland, North and South, and internationally.

Rather it is a reflection both of the depth of the crisis forcing governments and the state to employ and contemplate measures to save capitalism that in “normal” times would be seen to be at odds with neo-liberal doctrines. Furthermore there is a political calculation being made by governments the world over, and Ireland included, that the working class globally will simply not acquiesce to another round of full frontal austerity hence the emphasis on government borrowing over further cuts in living standards to pay for the crisis.

This is not to say that they won’t ultimately go down the austerity route but they will do so with trepidation. 2019 was marked by protest movements all over the world fuelled by dissatisfaction with living standards and basic democratic rights. While such movements have receded in the midst of the pandemic the factors that drove people onto the streets have not dissipated and if anything have deepened.

Capitalism as an economic system characterised by private ownership of the economy, wage labour exploitation, production for profit and an absence of democratic and rational economic planning constantly relies on the state to promote and protect its interests while maintaining a fiction that the free market system is in essence independent of the state.

The repressive apparatus of the state, the education system, taxation policy, infrastructure and a host of other supports are primarily geared towards assisting profit maximisation.

The return of Keynesianism

However the economic shut down forced upon us by the coronavirus has doubly shattered the illusion that the free market system can operate independently of the state. To avert a total collapse laissez faire norms must be set aside, and replaced with overt state intervention in the forms seen in Ireland and elsewhere including income supports for private sector workers, tax and rates deferrals, control of private hospital usage and a package of €6.5 billion in soft loan facilities for businesses in the South, and similar measures in the North underwritten by the Westminster government.

This suite of interventions and supports, mirrored to one degree or another in other countries and the promised direction of governments in the months and years ahead amounts to a revival of a form of Keynesian economic policy; that is, an effort to prop up capitalism through the crisis in a manner that leaves the relations of production i.e. private ownership, intact post Covid-19.

Leo Varadkar in the Dáil recently said he was not hung up on whether Aer Lingus, where job and pay cuts are being sought, was publicly or privately owned. That’s a lie. There is an aversion on the part of capitalist governments to measures such as nationalisation of enterprises and sectors of the economy formerly in private hands. This is not just evidenced by the arrangement entered into with the private hospitals but also in the total failure to come up with a workable childcare solution for frontline essential workers; where instead weeks were wasted with inducements to private providers who in the end, for insurance reasons, could not buy in.

Most of all in our elder care the outgoing Fine Gael government alongside Fianna Fáil, who were responsible for it being privatised in the first place, do not want to face up to the catastrophic failures of those services being run on a for profit basis.

It is one thing to provide income support, tax deferrals and soft grants and loans to private businesses willing to accept them to keep themselves afloat through the crisis. But Debenhams, Ryanair, Aer Lingus and many other companies show that these measures are no guarantee against liquidations and significant downsizings which can only be avoided on the basis of public ownership.

Former Socialist Party and Solidarity TD Ruth Coppinger was ridiculed, by some, when a decade ago she correctly made the call for Dell’s operation in Limerick to be nationalised to save thousands of jobs. Those doing the ridiculing were resting on the assumption that such a demand would appear outlandish to the average person. Whatever about people’s receptiveness to the demand of public ownership of enterprises threatened with closure back then, we are in terrain now where people are ringing RTE radio’s Joe Duffy’s radio show calling for Bewley’s on Grafton Street to be nationalised!

It is not just the concept of public ownership to which capitalist governments are opposed, but also to the traditional relations of workers and bosses being altered in the form of workers’ control and management of enterprises, as the Socialist Party have called for.

This has been a critical aspect to the demands we have raised around Debenhams where the employer has departed the scene. One of the prejudices against workers’ control and management is the notion that the expertise does not exist among workers on the factory and shop floor to run an enterprise. The reality, as shown by Debenhams, is that even when the employers refuse to “open the books”, from among the workers there can still be a solid grasp of how the enterprise operates.

The experience of recent months has led to a re-evaluation by working class people themselves of their own worth in the jobs they do and the fragility of capitalism in the face of crisis. There is genuine appreciation for workers in sectors such as healthcare, public transport, food retail, refuse collection, among others, who have had to keep working through the crisis putting their health and lives on the line.

Here and elsewhere, for example in construction, postal delivery, manufacturing and hospitality, workers have often had to take the initiative themselves to agitate for PPE, safe systems of work and closures of non-essential enterprises where bosses were primarily concerned about the bottom line.

Workers must decide
From a health and safety aspect alone workers, via workplace trade union structures, need to be empowered in all workplaces to determine when to return to work and how the work be organised to eliminate the risk of the virus spreading. This is all the more important now as billionaires are loudly calling for a rapid unwinding of restrictions in the interests of their profit making.

The overarching demand for workers in the course of the unwinding of the Covid-19 restrictions is that there should be no going back until workers feel that it is safe to do so. The virus is a threat to human biology, but capitalism itself has further exposed itself to be a sick system that does not deserve the type of “life support” that governments want to give it – it has to go.

We demand:
· State investment for the creation of thousands of jobs including public works; social infrastructure like public childcare and eldercare; public home building; and retrofitting and renewable energy.
· For the trade union movement to organise the unemployed in the fight for a public jobs programme and fight for mandatory trade union recognition and the scrapping of anti-trade union laws
· Take job shedding companies into public ownership, with compensation only on the basis of proven need, under democratic workers’ control and management
· For trade union and workplace committees to determine how a return to work is organised including testing for all workers before they return
· Maintain the ban on evictions, for real rent controls in the South.
· For one tier public health care system that is free at the point of use funded by taxing the wealth of the super-rich and big business.
· Capitalism must go!- Take the key sectors of the economy into democratic public ownership, democratically plan the economy to meet the needs of the majority not the profits of the billionaires and big business.