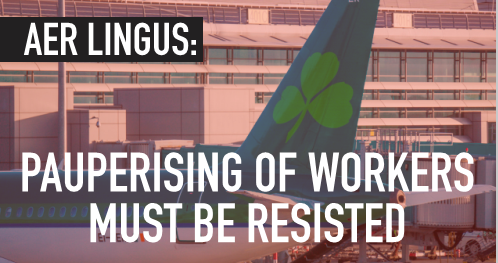 Aer Lingus: pauperising of workers must be resisted

A brutal assault on the pay and conditions of workers is taking place at Aer Lingus. Its outcome can have repercussions for workers everywhere, as employers look to use Covid-19 to drive down wages and conditions.

Aer Lingus management had already unilaterally cut pay during the pandemic. Workers had agreed a 50% cut, in recognition of the impact of the pandemic on aviation. However, management announced it would cut further to 30% of usual pay, along with mass layoffs.

On June 9, a “secret” document of vicious pay cuts and drastic work changes was leaked to the media. Management said it would row back on aspects if unions accepted proposals within a week. This was to try to cut across the ability of unions to discuss with members and hold ballots.

Disgracefully, the SIPTU leadership complied with this gun-to-the-head deadline, saying a ballot couldn’t be carried out as things were so urgent due to the “unprecedented state of peril” of aviation.

To the credit of the cabin crew, Fórsa insisted on a ballot and will announce the result next Monday. Management claims they will now proceed with the full set of proposals as all unions didn’t agree by the deadline.

To be clear, these cuts are unjustifiable — Aer Lingus has been making profits now for a decade and has huge cash reserves of almost €900 million to get it through what is clearly a crisis, but a temporary one. In 2018-19, the company made profits of €305m and €276m respectively.

Ironically, it has been the taxpayer, not Aer Lingus, paying most of the wages during the pandemic. In a meeting with cabin crew, one worker told me the company had only paid her around €5 that week, on top of the Covid payment she was getting and a tax rebate.

Workers are disgusted at the abuse of the TWSS (Temporary Wage Subsidy Scheme). One cabin crew member used the example of a worker who might normally get €800 a week. That is cut to 50% and Aer Lingus only has to pay €50 to bring it up to €400, as the Covid payment of €350 pays the rest. It means Aer Lingus is only paying 12.5% of its payroll.

Unions should demand the company’s books are opened up. Aer Lingus also has PPE and cargo flights and isn’t refunding passengers for unused flights.

For unions to be bullied into this is unacceptable. The duration of the package is meant to be until the end of February 2022 — by which time the crisis could be well over — but the preamble mentions changes will “last in perpetuity” and are  “irrevocable”. Long-standing Aer Lingus workers say cuts they accepted over 10 years ago in the last crisis were never restored. As one worker told me, “We have been donating part of our salary to Aer Lingus for the last 15 years.”

In the document, it is management’s sole right to decide on the distribution of work and resources — in other words, unions would be made meaningless. Staff must “deliver exceptional operational performance”; cabin crew numbers on planes would be lower and they would also marshall passengers on the ground. Workers would effectively operate on an ‘if and when’ basis, dependent on workload.

Until August, they would accept 75% pay for working 100%; if work falls below 50%, the company would keep them on 50% pay — but these “overpayments” would be “recovered” in the future, and huge changes made to annual leave. Point 13 of the pay proposals says the company would “aspire to restoring pay and hours at the earliest feasible date that the market and operations allow… on a phased basis”.

There is so much leeway in the document to interpret the duration in any way management likes. The unique feature is the rendering null and void of trade union rights. It is hard to believe that what was a fully state-owned national airline not so long ago is now behaving in a way that would make Ryanair green with envy.

International Airlines Group owns a huge range of airlines, from British Airways to Iberia to Aer Lingus and more. It has revenue of €25 billion. The idea that the aviation industry, including Aer Lingus, can’t weather this storm without pauperising its workforce is ludicrous. Neither should the state or taxpayers automatically bail out companies without proven need.

Why shouldn’t the shareholders pay for this bump in the road? They gained in the very profitable times of recent years. Employers want workers to take all the pain but none of the gain.

The trade union leaderships have been seriously tested by the Covid crisis. Retail, aviation, transport, entertainment and many other sectors have been hit badly — but the billionaires used a good crisis to their benefit. Pandemic restrictions have, of course, made it difficult for workers to respond. However, the Debenhams workers and others have acted to overcome those obstacles and to put up a fight. Union leaderships in general have been acquiescent and accepting of both the false economic arguments and the obstacles, and have not exerted any political pressure as the massacre of jobs and pay unfolds.

Aer Lingus never should have been sold off to vulture capitalists. As an island nation, public control of an airline and connectivity is especially important. It should be re-nationalised now to protect workers during this crisis — but so that workers and the state can benefit from the profits when the crisis is over. With climate change, public control of aviation is also vital to implement the type of change needed, while guaranteeing a just transition for workers.

Fórsa members should vote ‘No’ to this vicious package. Undoubtedly, huge fear is being generated. But a ‘No’ vote creates a headache for management and allows the workers to fight. A vote of acceptance makes resistance more difficult. Workers should then put major pressure on political parties to force Aer Lingus to pull back. While a private company, it is still widely seen as the national airline and politicians are held responsible for selling it off. The trade union movement needs to raise the demand for renationalisation.

If you want to join or find out more about the Socialist Party click here.