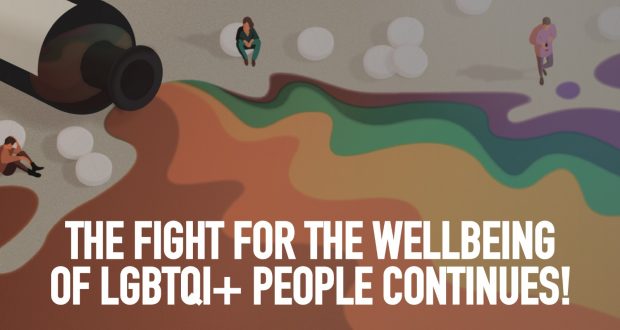 Today is the 17th of May, international day against LGBT phobia. Activities and parades normally take place in several countries on this day. However, considering the current corona crisis, hardly anything remains of this. Besides cancelling and/or postponing symbolic and political events and demonstrations, the corona crisis has brought extra repression, violence, isolation and discrimination for many LGBTQI+ people.

While corona is ‘the’ theme that prevails in the media all over the world, various politicians and regimes have seized the health crisis as an opportunity to implement all kinds of (long-planned) antisocial measures. Hoping for a lack of protests due to social distancing measures etc., they are now trying to quickly implement unpopular and discriminatory bills and savings. In many countries, LGBTQI+ people are one of the many groups whose rights and welfare (often already very limited) are being attacked.

In Hungary, Victor Orban immediately abused the almost unlimited power granted to him during this exceptional period to attack transgender people in his country. In practice, his bill means that it becomes impossible to be officially recognized as transgender. In Poland too, the attacks during the pandemic followed quickly. The conservative right-wing party ‘Law and Justice’, has used the lockdown to introduce a complete ban on abortion (against which millions of people have taken to the streets in recent years) and a new bill, which punishes sex education for minors with an up to 3 years prison sentence and equates homosexuality with paedophilia.

Such rhetoric and measures are accompanied by an increase in violence against LGBTQI+ people. Official bodies and conservative religious and political institutions have been openly calling for attacks on LGBTQI+ people. In Uganda, the police raided an LGBTQI+ shelter and arrested 20 people under the guise of ‘failing to comply with the corona-rules’. At the start of Ramadan, Ali Erbas, official religious representative in Turkey, accused homosexuals of spreading diseases (read ‘corona’) and sickening the society. In Morocco, manhunts are organised on gay men after an appeal by a Turkish social media celebrity.

These legislative changes and rhetoric in which LGBTQI+ people are presented as abnormal and as a danger to society, are popular with right-wing rulers. In this period of crises, they are trying to work themselves up on the basis of divide and conquer strategies and invariably seek scapegoats (refugees, LGBTQI+ people, etc.) in order to divert the population’s attention from the real cause of the problems, inequality and deficits in society. The enormous health crisis is way worse than it could have been because of the mismanagement of politicians over the years. It is now seized upon by these same politicians to attack minorities.

In addition to these legal attacks, the majority of LGBTQI+ people are also experiencing the disastrous consequences of neoliberal cuts and privatisations over the past decades. The pandemic reveals the increasing shortages of investment in health care, public services, education, decent jobs and housing etc. worldwide. Shortages that existed before the crisis, but are now rapidly pushing more and more people into precarious, unhealthy and deadly conditions.

Lockdowns are being organised in many countries. With the known lack of shelters for LGBTQI+ people and of sufficient social housing, many LGBTQI+ people, especially young people, are forced to stay 24/7 in a potentially hostile/violent home environment. Domestic violence is on the rise, as are suicide rates which are already high in a LGBTQI+phobic society. In refugee reception centres where, due to shortages, the accommodation does not lend itself at all to matters such as social distancing, hygienic measures, etc., the supervision and protection of LGBTQI+ refugees is under pressure during lockdowns.

Furthermore, LGBTQI+ people are overrepresented in the homeless population in many countries (e.g. LGBTQI+ youth have a 120% higher risk of homelessness in the US), which of course exposes them to many more risks of illness and repression during the corona period. Discrimination in the search for a home and a job, a phenomenon fuelled by years of savings on social housing and decent jobs, means that many LGBTQI+ individuals are already struggling to make ends meet anyway. Losing jobs (temporarily or permanently) during the corona period means a present and future of enormous precarity for many of them.

Finally, the years of under-investment in the public healthcare sector brought with it shortages of staff, infrastructure and protective equipment. Even in those countries where surgeries for transgender people who want to have them, are possible, the waiting lists before the corona crisis for transgender teams in hospitals often lasted one or more years. Now that there is a pandemic, many of these health institutions are forced to turn into corona departments and there is no room for ‘non-essential’ or ‘non-life-essential’ health care. Waiting lists will become even longer, but access to hormones has also been restricted, with all the psychological and physical consequences that follow from it, including an increased risk of exposure to violence.

Fight for LGBTQI+ rights and welfare

LGBTQI+ rights and welfare are at stake worldwide. The corona crisis is accelerating this process, but it is clear that the root of the problem was already present before the spread of this disease.

As long as there is no real democracy and as long as the majority of the population has to fight among themselves for the crumbs that remain after the profits have been diverted to tax havens, figures like Trump, Bolsonaro, Orban, Putin etc. in contexts of crisis and lack of credible alternatives, can come to power and abuse this power to attack women, LGBTQI+ people, migrants and refugees. They do not offer a solution to health crises, but represent and defend a system that is partly responsible for the magnitude of this crisis and that puts the profits of a small minority above the health, life and well-being of the majority of the population. Capitalism is a system that carries crisis, inequality, exploitation and discrimination in its DNA.

We must stand up for the rights of LGBTQI+ people. This means organizing international solidarity actions with LGBTQI+ people living in countries where often conservative colonial or religious laws characterize their mere existence as a crime. We must stand ready now and after the corona crisis and demand and enforce measures and investments on local, national and international level to combat LGBTQI+phobic violence and discrimination. In this fight against decades of privatization and savings on life-saving public services under neoliberalism, the struggle for LGBTQI+ welfare and the social struggle come together. We demand massive investments in health care, education, social housing, decent jobs, culture, shelters, the social sector etc. These can save lives, LGBTQI+ or not, health crisis or not. The battle for resources should not be fought by the working class among themselves, but together. And this is possible. LGBTQI+ phobia is not congenital. It is a means to divide and weaken the working class and it is linked to a class society in which the preservation of existing power relations is linked to the nuclear family and strict gender standards as a means to maintain social control and free reproductive labour.

Social demands necessarily lead to the discussion about the need for a fundamental change in the organisation of society, because in this capitalist system, rights are always under pressure and welfare will always be secondary to profit. We stand up for a socialist society in which the profit produced is invested in our well-being. Away with capitalism, away with oppression, towards real freedom and well-being. 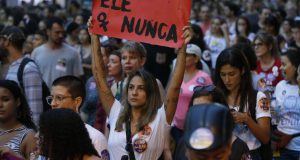