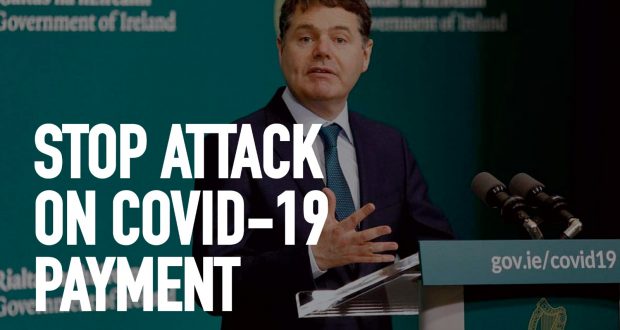 The “Covid-19 Pandemic Unemployment Payment” was introduced in March in the face of the most abrupt wave of layoffs to ever hit workers in Ireland. March CSO figures put adjusted unemployment at 16.5%, from 4.8% in February amid carnage on the jobs front.

Unemployment is estimated to hit 22%. Including the Wage Subsidy Scheme to Employers, over one million workers now rely on a state subsidy for their income. Retail Ireland estimates over 100,000 jobs could be lost in the sector.

The failure of the government to immediately implement a robust strategy to protect wages and jobs means many are looking at a bleak future, 598,000 workers now depend on the €350 per week payment. Those under 18 and over 66; those exploited in gig economy jobs; and those already on Job Seekers are excluded from the payment.

For most, the payment will simply put food on the table but without further action on rents and mortgages many will find it does not keep a roof over their head. A full-time minimum wage worker’s income has been cut by over 12%. For a worker on the average industrial wage their income would be more than halved.

Some part-time workers on the minimum wage may actually find themselves worse off if they return to work – exposing the multiple difficulties faced by underpaid young workers, students and many women and migrant workers, and highlighting the immediate need for an actual living minimum wage of €15, with no exceptions. The Pandemic Unemployment Payment will inevitably end up in the bank accounts of retail giants, landlords, insurance companies, mortgage providers or money lenders.

Fine Gael claim that the Covid-19 payment is unsustainable: costing the state €4.5 billion up to June – about €60 billion less than was given to the banks in one night in 2010 and about 30% of the infamous Apple Tax of €14 billion that the Government refuses to accept.

We are clearly not all in it together. Irish capitalists like The Keeling family and investors in private hospitals like Larry Goodman and Dennis O’ Brien have seen public money flow to their investments, or have had safety, travel and workplace restrictions waived to enable them to exploit workers and maximise their profits.

The global economic shutdown has shown clearly that it is workers who create the vast wealth that exists. The working class is also the frontline in health, childcare, cleaning, transport, waste collections, retail, and all essentials. The discipline of ordinary people in implementing social distancing has so far prevented a much higher loss of life. Contrast Fine Gael’s criminal disregard for those in nursing homes, years of neglect and underfunding of public health, the absence of widespread testing, the failure to provide workers with PPE and the needless deaths of many of the almost 1,500 victims of Covid-19. Despite the essential role they have and will play in the course of this pandemic (and in general), workers will be expected to pay for a crisis that is ultimately rooted in a dysfunctional capitalist system.

Irish Household debt is currently the fifth highest in Europe. “Generation X” (40-55yrs) is the most indebted generation in the history of the state with younger people facing a hyper accelerated level of precarity particularly in the workplace and in housing.

Under pressure, Fine Gael have been forced to maintain the Covid-19 payment in some form until at least mid-June. It could be that they go for a sudden withdrawal of payments, attempt to reduce it in phases, or on a sectoral basis as the economy re-opens. They may silently hit people’s bank payments and shift them to a reduced Job Seeker payment. If Fine Gael, Fianna Fáil, the Greens, or others form a government it is bound to be unstable and dogged by crises new and old. It is highly likely that the Covid-19 Payment will be one of the first major issues on the agenda of any new government.

Building pressure now for a campaign of state intervention and public investment to save and create jobs should be linked to a campaign to maintain the current weekly Pandemic Unemployment Payment of at least €350 per week for all who remain out of work. Any move toward new austerity must be fought. Any failure by the state to create jobs should not further impoverish workers or be allowed to create divisions between sections of the working class.

The wealth of society, which is the hands of the super-rich and big business — including 17 billionaires in the south of Ireland with a combined €40 billion — should be invested in an immediate programme of public works to create jobs, such as building new healthcare facilities and public homes (when safe to do so) and investment in green energy. Workers cynically cast aside by companies such as Debenhams should have their jobs and wages preserved through state interventions including nationalisations and continue to operate with workers at the heart of management.

It is inevitable that as we see a deepening of the crisis, there will be an attempt to settle the bill through austerity: cuts, privatisations and the increased exploitation of workers. The battle lines are being drawn under the shadow of government formation, which is cloaked in cynical, unserious aspirations on the part of the main capitalist parties. Join us and help organise the resistance and a new political movement for a socialist alternative. https://socialistparty.ie/join/