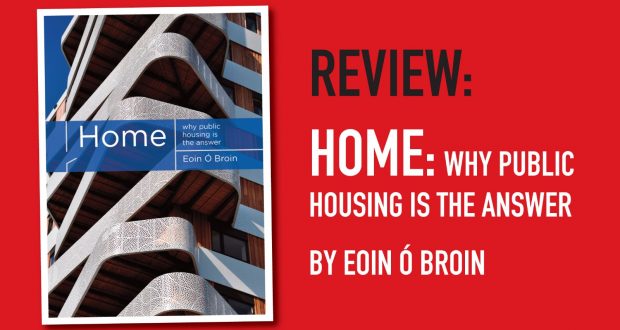 Though published in early 2019, Sinn Féin’s surge in this year’s general election fuelled a fresh spike in sales of this book pushing it back into the best sellers’ shelves.

Eoin Ó Broin has been Sinn Féin’s housing spokesperson since his entry into the Dáil in 2016. In some measure this book documents his activity in the Dáil around the issue, particularly on the Special All Party Committee on Housing and Homelessness that was established shortly after the 2016 general election and subsequently on the Oireachtas Committee for Housing, Planning and Local Government.

Two of three main sections give an informative history of official housing policy in Ireland from the late 19th century to the present. This takes us from the land reforms of the British government in response to the agitation of the Land League, to the alternating Fine Gael and Fianna Fáil dominated governments throughout the history of the state.

Positive lessons, relevant to the present, can be drawn from how mass protest action and agitation can force upon reluctant government’s improvements in the housing situation. Curiously Ó Broin makes only a passing reference to the Dublin Housing Action Committee active in the 1960s and early 70s. Their direct action and agitation led by left-wing and labour movement activists presaged the last major public housing projects in the state in the 1970s, such as Tallaght and Clondalkin.

Ó Broin does provide a sense of proportion about the performance of the governments in the early decades of the state when it comes to public housing. Relative to what preceded in the early 20th century and the pitiful levels of public housing delivery over recent decades it is understandable that the capacity of governments to annually deliver thousands of public homes, particularly from the 1930s to the 1970s, has been a useful propaganda point.

However, even throughout this period what resources that were put into public housing were heavily outweighed by state support and grants for people seeking to be homeowners. Though not fully explored in this book at the heart of this policy was a desire by governments to construct what they saw as a middle class home-owning bulwark.

The detailed tracking of changes in housing policy and the role of private finance in the housing sector from the 1980s onwards is particularly useful. The acute accommodation crisis we have endured since 2013 is the culmination of processes going back much further. This began with the depletion of public housing stock through tenant buyout schemes, underinvestment in new public housing stock, uncontrolled land prices, the activities of institutional investors, under-spending of Traveller accommodation budgets and the existence of Direct Provision. These have all combined to leave vast numbers of people locked out of public housing and unable to buy a home at an affordable price and in intolerable situations.

The third part of the book where Ó Broin sets out his alternative is at best a mixed bag. The measures he proposes would clearly improve the situation. However, Ó Broin’s position that resolving the housing crisis once and for all can be done within the fiscal restrictions and without fundamentally challenging the capitalist market is a miseducation of the reader. It speaks a great deal to O’Broin and Sinn Féin’s political trajectory.

Punches are consistently pulled in this section. A free pass is given to Approved Housing Bodies, which should be superfluous in a socialist housing solution. The strike of investment of private developers he argues should be dealt with by a punitive land tax, rather than these lands being nationalised (with no compensation) by the state. He envisages an ongoing place for private rented accommodation and a landlord class, albeit reduced in size in the context of an overall solution. It is true that within an overall accommodation solution you need provision for short term letting for students and for short to medium term migrant workers, but there is no reason why this category can’t be provided for publicly.

We are prepared for measures that fall short at the start. The philosophy Eoin Ó Broin brings to bear in this book is spelled out at the end of the ‘overture’ (rather than ‘preface’, ‘chapters’ and ‘epilogue’ the book is bizarrely structured like a piece of classical music with ‘overture’, ‘movements’ and ‘coda’!)

“Somewhere between the sincerity of inadequate amelioration and the energy of impossibilist rupture lies a pathway to a functional housing system that guarantees all people a place they can call home.” [my emphasis]

In plainer speak this is a dig against the socialist left who situate the housing crisis as a manifestation of capitalism and see the permanent solutions lying in socialist policies. This means breaking with the economic status quo through organising and building a mass movement based on working-class struggle. Despite the vast resources at its disposal Sinn Féin have been unwilling to build such a movement.

There is acknowledgement of the role of social movements but at best in the eyes of Ó Broin they are there to assist the struggle for immediate reform as an end in itself. For him and his party the capitalist system is to be accepted as a given.