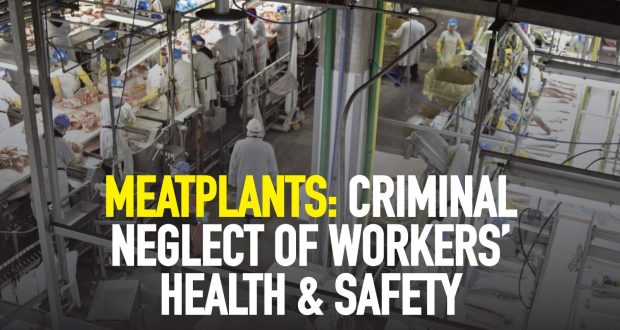 Covid-19 ripped through meat plants on the island of Ireland in the month of May. By the middle of last week 860 meat workers had tested positive for the virus in the Republic of Ireland alone.

Meat factories have proved to be hotspots for the virus across the world but the situation here has been particularly acute.

The rate of infection per meat plant is eight times higher than in the USA which has come in for international criticism on the issue. In Northern Ireland 58 year old East Timorese meat worker, Lucianna Vivienne day Silva, died from Covid-19 on 3 May. The meat industry workforce is low paid and overwhelmingly comprised of immigrants. The factories tend to be run like dictatorships and the workers are treated appallingly.

This was brought home in a couple of riveting interviews on RTÉ Radio One’s “Today” show on 15 May, where immigrant meat factory workers told of workmates being sent home with temperatures but instructed to report back to work the following day. The workers said that PPE had only been distributed in their workplaces very recently.

Workers spoke with voiceovers for fear of losing jobs and accomodation. Reporter Brian O’Connell told of workers “standing shoulder to shoulder, on top of each other.”

Workers have also been put at risk by their low pay (often barely above minimum wage) and by high rents. These have combined to force many workers to share accomodation in overcrowded conditions which has exacerbated the spread of the virus.

Workers in Northern Ireland have pushed back against these conditions in dramatic fashion. In Linden Foods, Moy Park, ABP and the Foyle Food Group workers have walked off the job to successfully demand improved health and safety measures.

Workers’ action contrasts sharply with the shocking inaction of the state on these issues. In the Republic not a single Health and Safety Authority inspector had set foot in a meat plant until such time as the virus had run amok in the industry for the best part of a month.

Taoiseach Leo Varadkar told me in the Dáil that this had nothing to do with Fine Gael’s fear of treading on the toes of the meat bosses — but failed to give any alternative explanation for the complete lack of action.

To properly guarantee workers’ health, safety and lives workers need to be in charge of health and safety in these workplaces. Workers need to organise — and receive backing from trade unions — to win workers’ control over these issues.

Workers and the unions must insist that meat factories with Covid-19 clusters be closed down until such time as workers and their families are tested. Workers must receive full pay if and when plants are temporarily shut.

Ending the rule of profit

Nationalisation of the meat factories would take ownership of the industry out of the hands of the profiteers who have exploited workers so ruthlessly and compromised the health of tens of thousands. Workers’ control in such a scenario would switch from being a constant day to day battle with the meat bosses to a relaxed and rational way of running a public enterprise.

Nationalisation would also allow for a move away from intense meat production on a just and phased basis, which would mean defending the jobs of those workers working in this industry. A move away from meat production is necessary from the point of view of reducing carbon emissions and protecting the climate. There needs to be an end to the cruelty faced by animals in this industry. A phased transition could allow for profits to be used to provide alternative training and jobs.

Production for social need (socialism) rather than production for private profit (capitalism) is more than just a nice idea  — it is an urgent necessity.  If you want proof of that you will find few better examples than what has happened in this industry during the Covid-19 crisis.