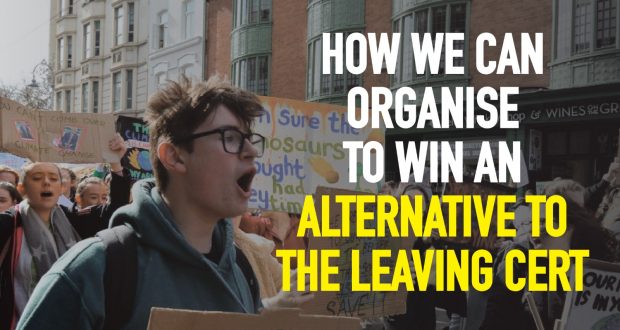 How we can organise & win an alternative to the Leaving Cert

All over the world, frontline and essential workers are being left with very little or no PPE, and non-essential workers are being forced back into work in dangerous circumstances in the name of capitalists’ profits. At the same time, Jeff Bezos (the owner of Amazon and richest man in the world) is on track to become a trillionaire by 2026. This shows that while millions are suffering from a pandemic, losing from their jobs to their lives, capitalists and governments protecting them are unashamedly making money out of it. But those inequalities, exacerbated by the pandemic, have pushed workers and young people into taking actions to protect and extend their rights.

Official records will show that the cancellation of the 2020 Leaving Cert exams was only due to logistical problems related to organising state exams in a pandemic. There is no doubt that the government was going to have to face the difficult realities of ensuring PPE & social distancing in the exam halls as well as recruiting sufficient extra volunteers. Yet, the government was always going to have to face these obstacles, so why did they only cancel the Leaving Cert when they did? Another significant factor in this decision was the pressure that students in the main, but also parents and teachers behind them, put on the government — raising their voices about both the loss of school time and the inhumane decision of proceeding with state exams in a pandemic as heavy strains on the mental health of young people.

It was clear from the beginning of the pandemic that the government was not willing to cancel the exams. Their complete disregard for young people’s well-being and their stubborn insistence that the Leaving Cert exams had to take place regardless of the impact it could have on young people, left students in situations of uncertainty and severe anxiety for over two months. The mental health crisis that could have emerged from holding the Leaving Cert exams is unspeakable.

It is therefore a coming together of the logistical problems (which were becoming greater as the government moved closer to the exams) and the student opposition that played a key role in securing the cancellation of the exams which threatened the mental health, health and safety of young people. The student opposition, which started organising, and was going to grow more (with the increasing mental health crisis and the prospect of doing exams kitted out in PPE, including gloves and face masks) clearly made the government fearful of what the coming weeks might have brought. Not only did the Leaving class of 2020 speak out online and organised a poll of nearly 25,000 students which showed 79% of students in favour of the cancellation of the exams, but they also started organising actively — with 2,500 attending an online protest rally organised by Mick Barry TD, Socialist Students and the Socialist Party and 1,500 signing up to join a campaign initiated at the rally to increase mass pressure on the government. The first action of the campaign following the rally was very significant and propelled #cancelthelc and #canceltheleavingcert as the two main hashtags on Twitter for a few hours. The next day, the Leaving Cert exams were cancelled, showing that when we fight and organise, we win.

Oppose any discrimination and unnecessary pressure on students!

However, the new arrangements that have been put in place are very far from satisfactory. First, the section of students who are preparing to sit Leaving Cert papers at a later stage have been left completely high and dry and have been banned from reaching out to schools and teachers after the official closure of classes on 11 May. Secondly, the “Plan B” or ‘calculated grading system’ proposed by the government is very close to the predictive grading system that has been put in place in the UK under the Tory government and will hugely discriminate working class students from working class communities and schools.

As soon as the exams were cancelled, the Dept of Education announced that “(calculated) marks will be adjusted to bring them into line with the expected distribution of school”. This ‘adjusting’ system as well as predictive grading need to be fully opposed. As a matter of fact, a 2016 study from Dr Gill Wyness of University College London shows that “the system of predicted grades is inaccurate. Only 16% of applicants achieved the A-level grade points that they were predicted to achieve, based on their best three A-levels.” The study also shows that applicants from low income homes are more likely to have their grades under predicted and that school profiling — which will see a student’s grades marked up or down in line with the past exam history of their school — will discriminate in particular against students in schools based in working class communities. Besides, a huge section of working class students would have been juggling with mental health issues, difficult household situations or even with working part-time during the school year to save up for college. Most of them would therefore not have achieved their full or best potential throughout the school year and will see their predicted grades misrepresent their actual capacities. This underlines a real issue with the traditional Leaving Cert system that is based on cramming rather than vocational training. Other factors of discrimination include students — especially from migrant communities — taking subjects outside of school and who don’t know if they will be able to be graded on those.

Students deserve a real break and no unnecessary pressure should be put on them. The Socialist Party and Mick Barry TD oppose the calculated grading system: no one should be issued with a fail this year, and a certificate to enter third level, apprenticeship or work should be handed to all.

The fundamental class issues of the Leaving Cert system

COVID-19 has played a key part in exacerbating inequalities amongst both Leaving Cert students and fifth year students who are still being asked to ingurgitate a significant part of their Leaving Cert curriculum in very stressful and difficult conditions. Living in a busy household; not accessing proper devices or broadband; not having access to classroom interaction to fully engage with the curriculum and practice orals and other skills; having parents on the frontline; having family members or themselves affected by the virus — are only a few of the many reasons why students, and more specifically disadvantaged young people, have had their mental health and ability to study properly hugely impacted.

But those inequalities are not unique to the COVID-19 situation, they are part of the Leaving Cert system as a whole. Rather than nurturing inquisitive and intelligent youth, the Leaving Cert emphasises values of productivity and competition. Instead of being asked to develop intelligence and skills that would be useful for entering active life, students are required to regurgitate a full 18 months curriculum in a series of memory tests. This means that the Leaving Cert favours neurotypical middle-class students from stable families, who have quiet study spaces, can afford private education such as grinds and don’t necessarily have to work part time to help sustain their families or save up for college. Not only does everyone not enter the exams on an equal foot, but the cramming nature of the Leaving Cert exams puts a huge and unacceptable strain on young people’s mental health. A 2019 survey conducted by revision website Studyclix reported that 75% of Leaving Cert students experienced “extreme stress” as a direct result of the exams, with 28% suffering with depression.

Why does the Leaving Cert exist?

The Leaving Cert and its points system exist in order to help perpetuate a neo-liberal and right-wing agenda looking at short term profitability rather than at investing in necessary public services such as education. While Ireland has the 2nd lowest spending of education in Europe as a percentage of GDP, the government as planned to spend over €80 million in the Greyhound and Horse Racing industries this year. This really emphasises the priorities of a government that is more willing to invest in cruel and useless, yet profitable industries rather than to invest in third level education and expand places for anyone who’d like to enter college or university. Young people are being forced to compete in a battle for scarce third level places — disadvantaging students from lower income backgrounds — and the calculated grading system for the Leaving Cert class of 2020 is based on the same points system pitting students against one another.

Instead of refusing to accept the €15-plus billion Apple tax, the government should use it now and come up with a plan of emergency taxation on big corporations to massively invest in third level education. The money could be used to acquire places, hire more teachers (i.e. precariously employed postgrads and tutors), reduce the size of classrooms and scrap all entry fees, whilst ensuring access to a living grant for all. By increasing places in courses and apprenticeships and offering places for anyone who wants one, this year’s students could enter third level without having to pit against one another in the middle of a pandemic. As well as that, such an alternative to the Leaving Cert exams next year could point a way forward to how third level should operate from now on and could allow the abolition of the stressful and outdated Leaving Cert system once and for all.

Young people can organise now and achieve real change for their own education!

This year, 5th and 6th years students are experiencing exacerbated inequalities and injustices which are embedded in the Leaving Cert system. The government which has completely disregarded the well being of students, has no interest in challenging the status quo. This is emphasised by their unwillingness to make concessions to young people and invest into third level education. Yet, students should have a say in their education. The victory around the cancellation of the Leaving Cert, as well as the recent workers’ and young people’s victories of the anti-water charges and the Repeal movements, show that if organised behind clear demands, young people – with parents and teachers behind them – have the power to put pressure on the government and force them to implement real change and a fair alternative to the Leaving Cert system that would remain independent and become truly impartial.

By international standards, the Irish educational system bears huge repressive and oppressive traditions. The fight for the abolition of the Leaving Cert exams should be linked with the fights to end of all forms of inequalities and oppression, to separate Church and State, for the real democratic management of the schools by teachers, parents and students and for a socialist alternative. A socialist alternative — where the economy and society would be democratically planned by workers and communities to put people’s needs before profit — would be a system for each according to their abilities, which would not emphasise competition and values of productivity but would teach students to love learning and think with curiosity, with curriculums based around young people’s aspirations, rather than around the demands of the capitalist class.