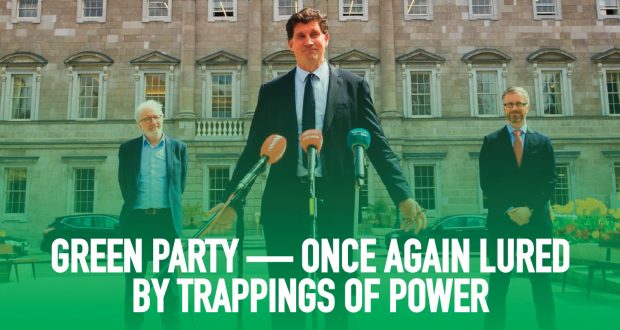 Environmental activist Greta Thunberg said recently that: “There is a lot of talk about returning to ‘normal’ after the COVID-19 outbreak. But normal was a crisis.” Taking little heed of this important warning, the Green Party has announced – despite some disquiet among its TDs – that it will formally enter talks with Fianna Fáil and Fine Gael for government.

The welcome and significant increase in awareness of the seriousness of the climate crisis has seen an increase in people looking to the Green Party, a force that had been seriously damaged from its period in the 2007-11 government, but recovered in elections over the last year. The question now is are the Greens doomed to squander that recovery by repeating past mistakes?

That the Greens intended to take this approach had been well signaled in advance. At last year’s Green Party conference, arguing against a motion that would have ruled out coalition with Fianna Fáil and Fine Gael, Eamon Ryan spoke of the need for “inclusive politics.” By this he meant politics that aligns and coddles the powerful and the capitalist class and its representatives, in the hope of garnering concessions, rather than ending their rule. It is consistent with the party’s long held self-description “as neither left nor right”.

Substantial divisions have opened up within the party on the issue over whether-or-not to go into coalition with Fianna Fáil and Fine Gael.

Faced with an election result that saw the traditional two largest parties reduced to their lowest ever levels of combined support and for the first time ever a minority in the Dail, the idea of putting not only one, but both parties back in jarred with the message of the election.

The Greens’ record in office

When the Greens went into coalition with Fianna Fail in 2007, TD, now MEP, Ciaran Cuffe described this arrangement as a deal with the devil. It worked out about as well as most fables based around undertakings with demons. With the Great Recession of 2008 and its aftermath, the Green Party served as a rubber stamp for the bailout of bondholders and the banking system and every austerity measure, from cutting the blind pension to the removal of cervical cancer screening for young girls. They failed to gain any substantial environmental measures.

They betrayed the community led protests in Rossport, Co. Mayo against Shell’s Corrib gas pipeline that they had supported in opposition. Farcically, Eamon Ryan, as minister for Communications, Energy and Natural Resources undertook a scheme that incentivised the purchase of Diesel engine cars, a major climate and public health risk after taking the Volkswagon Deiselgate figures at face value.

As a result, the Green Party lost all six of its seats in the 2011 general election and were forced into political wilderness.

The reality of the climate crisis has remained. With the growth of the environmental movement internationally in the last two years and the memory of its role in government having rescinded particularly among young voters, the Greens found a way back. Gaining seats in local government and the European Parliament last year, they won 7.1% and 12 seats in February’s general election.

After some amount of internal wrangling, including climbing down from a previous refusal to enter into any negotiation for anything other than a national unity government, Ryan eventually was able to get the eight out of 12 TDs necessary to commence formal talks. Notably the party’s deputy leader, Catherine Martin, was among those who voted against. She has since agreed to participate in talks.

The Green Party’s rules require the support of two thirds of its membership to enter coalition and there are some signs of unrest within the ranks. It is important to note, that while there is a small section of the Green Party membership that are opposed to coalition with the Fianna Fáil and Fine Gael on principle, this is not the primary driving force of the opposition.

The motion calling on the Green Party to reject coalition with Fianna Fáil or Fine Gael was heavily defeated at last year’s conference. However, the idea that, having just regained a foothold in public life, they would immediately jeopardise it by propping up both Fianna Fáil and Fine Gael, huddled together for warmth at a time of weakness, as opposed to Fianna Fáil or Fine Gael with some other forces that can be posed as something other than it is, is something that will be resisted. This will be done largely in the interests of self-preservation.

Looking for a prop

Looking for willing accomplices to implement harsh policies post Covid-19, Fianna Fáil and Fine Gael have made a series of offers designed to lure the Green Party into government, including support for increasing a regressive carbon tax that will penalise working-class people the harshest. This desire is matched only by that of Eamon Ryan to return to cabinet. An increasingly embarrassing figure, best known in the public imagination for his increasingly regular missteps, most recently calling for the public to use south facing windows to have “salads ready to go” in case of a collapse in the food supply due to Covid-19.

A key focus of Ryan’s strategy is getting Fianna Fáil and Fine Gael to sign up for a 7% per annum emissions reduction target. This is in line with Ireland’s undertaking under the Paris agreement, though far short of what is actually needed to deal with the climate crisis.

Ryan’s desire to enter government is palpable. According to an article in the Irish Examiner, Ryan has been working with an “associate in Leinster House” to write a letter from Martin and Varadkar that he believed would be acceptable to the Green Party membership. By whatever process it came about, the formulation that Martin and Varadkar eventually produced, proposing a reduction of an average of 7% per annum across the next decade, conveniently beyond the government’s five maximum term, was elastic to the point of meaninglessness.

Individual TD’s such as Fianna Fáils Niall Collins citing the potential threat to the environmentally disastrous Shannon and Cork LNG projects, and Tánaiste Simon Coveney, citing any threat to the agriculture sector are just the public faces of the obstacles they will face in trying to implement any environmental reforms.

The collapse in economic activity recently due to Covid-19 means that a greater drop in emissions are likely to occur this year than otherwise would. Any ignoring of it in the coming years will come as a government is embedded. The party can come under considerable pressure from the capitalist establishment to stay in government. There is every chance that if the Greens have at that stage lost support, feel trapped in a prison of their own making, they will hang on for any morsel that may fall from the table to justify avoiding the wrath of the public.

Whatever the Green Party ultimately does, there will be a need to build a working-class movement to defend our planet and to resist the attacks on living standards that are coming down the road. Such a movement must aim to break with capitalism, a system that incentivises the rapacious drive for profits over the long-term survival of the planet. It must unite workers and young people in a struggle for a democratic socialist society that fights for society’s wealth to be publicly owned and democratically controlled by the majority. 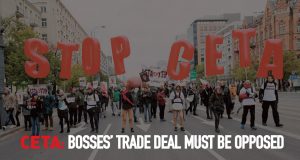