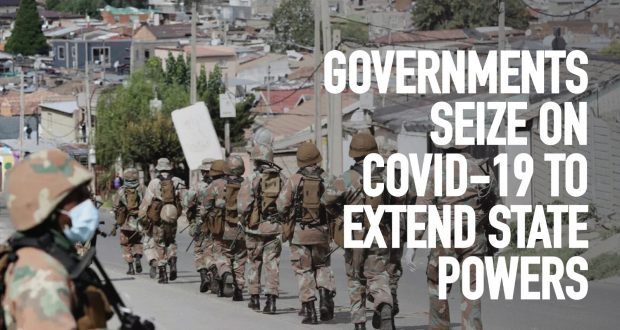 The Economist (3/28/2020) has described it as “the most dramatic extension of state powers since the second world war.” Across the globe governments have implemented draconian legislation akin to that of police states under the pretext of protecting society from the COVID-19 virus. For many the global lockdown has been implemented brutally.

In the time when Nigeria had recorded only six deaths from COVID-19, the army and police had already killed 13 people enforcing the lockdown. In Rwanda, the first victims of the crisis were two people shot dead by the police. In Kenya, the police shot dead a 13-year-old boy. Across the neo-colonial world hundreds of millions, especially migrant workers and those in the informal economy, face a stark choice: defy the lockdowns — leave their homes to earn a living to feed their families and risk catching the virus or being victims of brutal state repression — or stay at home and die of hunger.

In India, migrant workers have been sprayed with sodium hypochlorite, a bleaching agent that causes damage to the skin, eyes, and lungs. In Paraguay, the poor who break the quarantine have been tasered, in the Philippines curfew violators have been put in dog cages — 17,000 have been arrested and placed in overcrowded detention centers.

In Mombasa, Kenya, police have used teargas and batons in an operation they claim was to protect people against the spread of the virus.

Cyril Ramaphosa’s ANC government in South Africa has resurrected use of the sjambok, a vicious three-foot-long whip that was a symbol of brutality during the Apartheid era and police have also fired rubber bullets at nurses protesting against the lack of protective gear.

In Israel, Prime Minister Benjamin Netanyahu has been given the power to rule by decree without reference to the courts or parliament. In Hungary, parliament passed new laws including jail terms for spreading misinformation and allowing the right-wing Prime Minister Viktor Orban to rule by decree under a state of emergency that has no time limit. Orban stated “We are fighting a two-front war: one front is called migration, and the other one belongs to the coronavirus. There is a logical connection between the two, as both spread with movement,” (France24.com, 3/13/2020).

While the majority of people currently look favorably on new legislation which is claimed to prevent the spread of the COVID-19 virus, working-class people, trade union activists, and socialists must all be alert to the inherent dangers. Traditionally repressive legislation introduced at times of crisis tends to remain on the statute books to be used at a later date against workers on strike and working-class communities campaigning for their rights. In France in 2015, the state of emergency declared after a terrorist act was subsequently used against climate change demonstrations at the UN Summit.

The Guardian Weekly (4/10/2020) quotes Shoshana Zuboff, author of The Age of Surveillance Capitalism, saying that prior to 9/11 the U.S. government had been developing regulations designed to protect the personal information of web users. “In the course of a few days the concern shifted from how do we regulate these companies that are violating norms and rights to how do we nurture and protect these companies so they can collect data for us?”

In China, drones search for people without facemarks, while in Germany, Austria, Italy, and Belgium, governments are using data from major telecommunications companies to track people’s movement. In Israel, the national security agency is allowed to access infected people’s phone records. South Korea sends texts to the public identifying potentially infected individuals and sharing information about where they have been.

The Coronavirus Act in the UK gives the police and immigration officers the power to arrest and detain people suspected of carrying the virus for the next two years. The U.S. Department of Justice has filed a request with Congress for a new rule that would allow judges to suspend courtroom proceedings potentially leading to people being jailed without ever being able to formally object. As Kevin Blowe of Netpol commented “These powers get put in place, and it sounds reasonable at the time — and then very quickly they’re applied for other purposes that have nothing to do with democracy and nothing to do with public safety.”

How do these laws get used?

During the historic British miners strike of 1984–85, thousands of miners were arrested, charged with offences such as conspiracy and riot, and legislation supposedly meant for national emergencies was used to restrict the movement of miners from one part of the country to another. During the strike, 11,291 people were arrested, mostly for breach of the peace or obstructing roads whilst picketing, of whom 8,392 were charged and between 150 and 200 were imprisoned.At least 9,000 mineworkers were fired after being arrested whilst picketing even when no charges were brought.

Papers released from the National Archives revealed that Prime Minister Margaret Thatcher was secretly preparing to use troops and declare a state of emergency at the height of the miners’ strike. In what became known as the “Battle of Orgreave” thousands of miners from around the country picketed the plant on June 18, 1984. They were met by 6,000 police officers commanded by a South Yorkshire police assistant chief constable, and were subjected to a charge by mounted officers, with many brutally assaulted, hit by police on horses and on foot wielding their batons. Ninety-five miners were arrested, and 55 prosecuted for the offence of riot, which carried a potential life sentence in prison.

In 2019, the police used Section 14 of the 1986 Public Order Act to ban Extinction Rebellion climate change protesters from demonstrating in London. Six ESB strikers (electricity supply workers) in Ireland in 1985 were arrested using Section 30 of the Offences Against the State Act, legislation originally enacted against terrorism.

During the present crisis, in the South of Ireland drastic new emergency powers were granted to the state in March by the Dáil These powers include the power to force someone to stay in their home, to force someone to stay within a certain distance of their home, to ban gatherings in a private home and to ban gatherings in public (which would include protests).

The Sunday Business Post described the powers as containing “measures akin to a police state.” These powers can remain in place should the Government so choose up until November 9 and can be renewed by the Dáil after that point.

In the Dáil debate Socialist Party and International Socialist Alternative TD (MP) Mick Barry opposed the emergency powers by speaking against them, submitting amendments and saying “nil” (no) when the Ceann Comhairle (chairperson) asked whether the powers were agreed.

He pointed out that COVID-19 emergency legislation had already been used in other countries to suppress dissent and pointed to the breaking up of a Yellow Vest protest by police in France. He also said that emergency powers had been used in the past in Ireland for purposes other than those for which they had officially been introduced, most notably with the Offences Against the State Act which had been introduced to combat “terrorism” but was subsequently used many times against workers’ struggles.

Rather than assist the battle against the coronavirus, repressive legislation can actually hinder it. In Italy, a crucial contribution to the battle against the virus has been made by those workers who took strike action to demand the closure of nonessential industry kept open by their bosses to maximize profits. Now, emergency legislation which bans strikes up until April 30 will be used as a deterrent against these powerful antivirus actions.

In Hungary, the dictatorial measures implemented by far right Prime Minister Victor Orban (which include postponement of all elections) will completely undermine the openness and transparency that the World Health Organisation itself says is a key part of winning mass support to fight an epidemic.

The most powerful factor in slowing the spread of the virus has been the discipline of the vast mass of ordinary people who have voluntarily implemented hand washing and social distancing guidelines. The voluntary efforts of the mass of the people are a far, far more powerful tool than repressive powers in the fight against the pandemic.

Unfortunately, the left internationally have generally not taken a principled position of opposition to the granting of emergency powers to the capitalist state. This was seen graphically in Portugal where the Left Bloc voted in favor of a ban on strikes and the Communist Party abstained. The pandemic and the post-pandemic situation will open up many new challenges, dangers and opportunities for the left. The adoption of a principled position on the question of emergency powers is and will continue to be a key issue for the left as it prepares to meet these challenges.

The role of the state

In capitalist societies the state is not a neutral arbiter that exists simply to ensure the smooth running of society and to uphold “justice” and “democracy.” Frederick Engels in his book The Origin of the Family, Private Property, and the State, first published in 1884, describes the state as “a product of society at a certain stage of development; it is the admission that this society has become entangled in an insoluble contradiction with itself, that it has split into irreconcilable opposites which it is powerless to exorcise. But in order that these opposites, classes with conflicting economic interests, shall not consume themselves and society in fruitless struggle, it became necessary to have a power seemingly standing above society that would moderate the conflict and keep it within the bounds of ‘order.’”

The state, as Engels put it, can in the last analysis, be understood as “armed bodies of men acting in defence of private property.” Therefore all of the new legislation that is being implemented by governments around the world must be viewed from the perspective of how it will strengthen the bourgeois state and the ability of the capitalist class and their political acolytes to oppress working-class people struggling and campaigning to improve their lives.

IMF managing director Kristalina Georgieva says the pandemic will unleash the worst recession since the Great Depression of the 1930s. A total of 81% of the global workforce of 3.3 billion people have had their workplace fully or partly closed. Nearly 200 million people could end up out of work in the next three months alone according to the International Labor Organization. There will be a political reckoning in the coming years as capitalist governments attempt to make the working class and poor masses pay for the economic impact of COVID-19 on the world economy. They will not hesitate from using the full powers of their states, including the new powers they have recently acquired, against working class people fighting for jobs, for decent healthcare, for better wages and against the increasing impact of climate change.

The late Peter Hadden, a founding member of the Socialist Party in Ireland and our international organization, wrote in an article entitled “Northern Ireland: Marxism and the State” (1985): “Marxists do not base their demands on what may be popular at any given time. Temporary moods often develop in which class realities can be obscured from the eyes of the working class. Under such conditions it is the responsibility of the Marxists not to be swept along by the prevailing current of popular opinion, but to defend their program and to tell the working class the truth.”

This is the case today — in the midst of the pandemic, when the prevailing mood among many is that the state is acquiring new powers to protect us all from the COVID-19 virus it is our duty to tell the truth that these new powers are a danger to all working-class people. 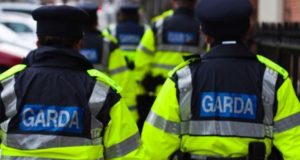 Coronavirus crisis – Say no to attacks on democratic rights