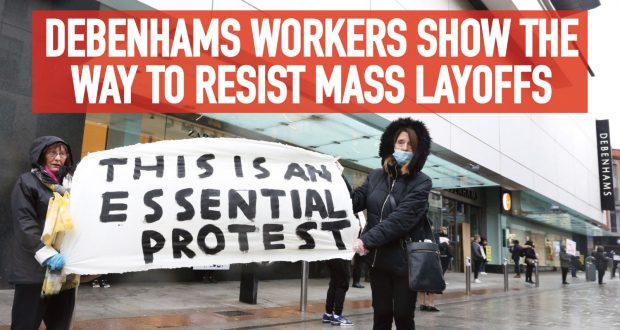 Debenhams Ireland workers were sacked by email on Easter Thursday — just two days after the company had assured them their jobs were safe. Such callous indifference to workers — some with decades of service going back to Roches Stores and the launch of Debenhams into Ireland in 1996.

On April 6, Stefaan Vansteenkiste, Debenhams chief executive, had said the company would go into administration to protect its workers, so it could resume trading once government restrictions were lifted, stating:

“We are working with a group of highly supportive owners and lenders and anticipate that additional funding will be made available to bridge us through the current crisis period.” (Irish Times 6/4/20).

One of these ‘supportive owners’ and lenders is Bank of Ireland who part-own the Debenhams parent company, Celine Jersey TopCo Ltd, with what appears to be a vulture fund. Debenhams workers have rightly asked how a bank we bailed out a decade ago, and in which the state has a stake, could be allowed to pull the plug on Debenhams and dump the workers.

As millions of workers worldwide are now finding, Covid-19 is an opportune time for millionaire shareholders to cut their losses, cast off their workforces and leave taxpayers to pay minimum redundancy. Debenhams is a test case and the response to it will be the benchmark for other firms. This week the Dalata / Clayton hotel chain announced thousands of redundancies. As did Aer Lingus and Ryanair. More will inevitably follow.

Retail Ireland has warned of 110,000 job losses in retail alone. Oasis, Warehouse and Laura Ashley followed Debenhams announcement. Rumours abound of other retail giants like Penneys and Next following suit. As one Blanchardstown Debenhams worker said, if this happens, one third of Blanchardstown Centre could remain closed after Covid-19.  Other shopping centres and high streets similarly.

Companies also see in the pandemic that newly-introduced emergency health regulations mitigate against an active response by workers and trade unions. But what they underestimated is the determination of workers to fight when their livelihoods are on the line.

Debenhams is a workforce unionised over many years, with a layer of strong shop stewards throughout the country. Their trade union, Mandate, has pledged to fight all out.

As well as fighting through their union, Debenhams workers independently contacted political representatives. A number contacted Socialist Party reps Mick Barry TD in Cork and myself in Dublin. This led to the idea of bringing workers from the different counties together to discuss through Zoom conference calls.

Workers were determined that they would not allow deliberate use of the global pandemic as a way of shutting them down without any resistance. At the above meetings the workers discussed and decided to organise safe, socially-distanced protests at stores, as well as at Bank of Ireland.

The media was alerted the day before, which led to other Debenhams workers getting involved. Wednesday, 22 April would prove to be an unqualified success. The workers got their case out to the public, in their own voices and, through mainstream and social media, put Debenhams onto the agenda. Politicians were also forced to take note.

However, one Debenhams protest that day was cut short by Gardaí, citing the emergency powers given under amended health legislation. Workers at Henry Street, Dublin, were publicly read the act, prevented from talking to journalists, threatened with arrest and the Garda van, moved on and ‘escorted’ to public transport. Their shop steward had her name taken.

This harassment contrasted starkly with inaction against a crowd of far-right racists who refused to socially distance at a court hearing the same day and the workers won massive public support as a result. The Taoiseach also partook in another non-essential photo op with a large group of frontline workers. Same city, different rules.

Garda actions dramatically backfired. Debenhams trended on Twitter. Even the Fianna Fáil  leader — no friend to workers — stated next day that the protests had been conducted safely. A video of the events filmed by a Socialist Party member was viewed over 50,000 times.

The intervention by Gardaí was not accidental or random. Gardaíi were waiting at the Henry Street store when workers arrived. This was a conscious decision by the state to send a warning message to other workers. Emergency public health legislation has been passed in states worldwide, with varying degrees of strictness. The vast majority of people see the laws as necessary to deal with coronavirus.

However, the Socialist Party warned that such legislation could also be used against workers in precisely the situation faced by Debenhams employees. Mick Barry was the only TD who explicitly registered his opposition to the legislation providing new Garda powers, specifically referring to their potential use against trade unionists and protests. When this legislation was discussed in the Dáil on 19 March he said:

“I support many of the provisions in the legislation but for the reasons I outlined [the attacks on democratic rights], I am opposed to the overall package.”

Debenhams protesters were the first serious test by workers of the laws. By challenging them carefully, in a disciplined way seen to be respectful of public health concerns, the workers have done other workers a real service in not allowing these laws deter them.

The following week in a second round of protests, Gardaí felt compelled to allow the Henry Street workers to have a protest, even if shortened. Workers held a banner saying “This is an essential protest”, as they’d been challenged on the non-essential journey clause.

The workers had held a second day of successful protests at an increased number of locations — ten stores and two banks — again getting major publicity. By this time, through more discussion on the Zoom calls and, having highlighted the issue of statutory redundancy on the first day, workers were now anxious to place the emphasis on retaining their jobs, calling on the government to act to stop a ‘jobs massacre’ in the retail sector.

In a statement to media, two of the shop stewards protesting, Jane Crowe of Henry Street and Valerie Conlon of Patrick Street in Cork, said:

“The message of workers from these protests is that 2,000 jobs are on the line at Debenhams. That’s thousands of people and families reliant on our wages. The government would be better off stepping in now, to invest to keep people employed, rather than having to pay for thousands more people going onto social welfare.

“We believe many of the stores are profitable, as well as the online business. The government is putting billions in to keep people employed because of Covid 19. There are also EU funds available to prevent redundancies. We are asking all  our political representatives to ask the government to take a stake here and invest to keep the company trading.”

They called on other retail workers to support them.

On Thursday 30 April, the liquidation of Debenhams went ahead. Workers were disappointed they had no voice in the proceedings, that the company was liquidated without anyone arguing for retention of their jobs.

Despite this, they resolved to press political parties and TDs for state intervention and investment to maintain employment at Debenhams. Fianna Fáil, Fine Gael and the Greens are most likely to form a government. Will they support state investment and takeover of Debenhams, particularly FF who’ve tacitly given support?

One of the workers did a lot of independent research and wrote to the union and to political parties about this, pointing out that four-six stores are profitable, as is the online business and there is no justification for closing these. With government investment, these could return to trading as soon as restrictions are lifted in June.

She pointed to funds established by the EU to stop redundancies, such as the €100 billion SURE (Support to mitigate Unemployment Risks in an Emergency), as a fund the Irish government could call upon for Debenhams. While the EU can’t be relied upon to back up the rights of workers,  this does show that the wealth is there in society to protect jobs, it should be used to benefit workers and not big business as the EU Commission intends.

Public ownership to save jobs

There is a myth peddled that under capitalism private companies sink or swim on their own. Far from it. They are kept afloat with armbands and life jackets by the state.

In order to attract foreign direct investment and create jobs, IDA Ireland in one year alone, 2018, gave over €100 million in grants to some of the most profitable companies on the globe. For example, Abbot Laboratories received €14 million; top pharmaceutical companies received €30million; Intel and Microsoft received €1.9 and €2.8m respectively.

On top of this, they get sweetheart deals where they pay low — or no — tax, depriving the exchequer of funds. Thirteen companies paid less than 1% tax last year. We hear a lot about social welfare, but this corporate welfare costs a huge amount.

14,040 net new jobs were created in 2018 by the IDA. Just waving goodbye to 2,000 jobs at Debenhams (including the concession stores) can’t be accepted.

To maintain that number on welfare, to lose the taxes they pay will cost the state hugely — as well as the spinoff jobs related to the stores. Why would it then be unthinkable for the state to invest and take over the Debenhams stores in this context? A business plan could be drawn up to increase revenue, including to diversify. Roches, who own many of the Debenhams premises, and other landlords are also being called on to reduce rents.

In the last two months the state has had to implement policies it argued before were not possible or unconstitutional — propping up company wage bills, banning evictions, mortgage relief, taking over private hospitals (albeit at a disgracefully high rate). €6.5 billion has just been announced to support businesses.

It may be argued that Debenhams is losing too much money and has too much debt. For example €3.8 million is owed to Revenue — the government is proposing warehousing of taxes owed. How much of the debt is to Bank of Ireland or Debenhams in the UK?

The Socialist Party believes Debenhams, and other companies implementing mass redundancies, should be taken into public ownership, democratically run by the workers themselves and a new business plan drawn up. Workers are well aware of the trends in retail, growth in online shopping etc. and have the skills and ingenuity to work out a way forward.

The question of who will pay for the Covid-19 recession is posed. Will it once again be working class people or, this time, should it be the bankers and big business? The only way to prevent another decade of austerity and misery for working people is for the wealth, the banks and production to be taken into public ownership, under the control of the majority and for the economy to be rationally planned in our interests.